This is the second in a five part theme week marking the centenary of income tax in Canada.

Robert Borden’s government introduced income tax in 1917 because Canadians wanted a fairer system of taxation than they had. How unCanadian of them! According to Margaret Wente (writing about Thomas Piketty’s egalitarian economics), Canadians have never been interested in inequality. “They simply don’t perceive a problem… The obsession with inequality is overwhelmingly a concern of the liberal policy elites – the people who live in rich liberal coastal states, or Toronto’s Annex, or Ottawa’s Glebe.” Wente mocked “a bunch of experts,” the Toronto Star, and the CBC for weighing in on the data and suggested that the real social divide in Canada may not be rich versus poor but policy elites versus masses.[1]

So what happened in 1917? Was it an embarrassing moment when the wonks triumphed over common sense? Or is she wrong about Canadians and inequality? Wente’s skepticism is a salutary one: it encourages us to revisit those events and try to understand what was special about the relationship between policy, public opinion, and fairness in that exceptional year.

Certainly 1917 was exceptional. Never were made nor met greater demands for self-sacrifice. Thousands of young Canadians killed or wounded; millions of Canadian dollars put to funding not just the soldiers and munitions, but the whole wartime economy, including the foodstuffs that Britain could no longer afford to purchase but desperately needed just the same. Until the spring of 1917, all these things—men, production, finance—rested on voluntary contribution. Taxes on industrial production came in 1916, but all the rest came from consumer taxes and loans, both “voluntary” exactions according to classic liberal theory. But in the spring of 1917, the voluntary system seemed exhausted. Borden passed conscription in May, promised income tax in June, and passed it in September. Progressive Liberals defected to a Borden-led “Union” party that won election in December 1917. Both sides championed income tax and lambasted the others’ scheme; a voter might have found it hard to figure out which had the fairer formula. 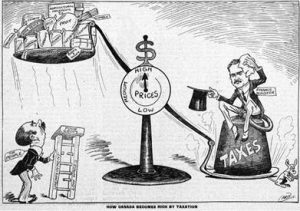 Can we peer past the partisan politics to see an underlying logic? Something genuinely new was born in 1917. Before the War, the Canadian government drew most of its income from a regressive protective tariff that taxed the poor more heavily than the rich and redistributed wealth upwards. In 1911, Borden won election on a protectionist platform. But in 1917 it became harder to justify that upward redistribution of wealth. It wasn’t just that life and limb couldn’t be held as less sacred than property. There was also a new argument for compensatory taxation: taxes on wealth were widely seen as needed to compensate for all the regressive taxes.[2] Canada got there more slowly than most.

Amidst the many factors, not forgetting the Russian Revolution, was wartime economic managerialism. It made the federal government newly accountable for how well or how poorly people were doing. And fairness meant something unusual in 1917 because the public, which usually wants low taxes, demanded taxes that “hurt.” Stephen Leacock reflected widespread sentiment when he called for “a blast of taxation – real taxation, income tax and all, that should strike us like a wave of German gas.”[3] The public wanted heavy taxation because it thought that the well-to-do weren’t carrying their share of the war’s burdens.

A state that manages the economy and taxes heavily must meet different expectations from a liberal state. If rich grew richer and poor grew poorer before the war, well, it wasn’t clear that state intervention would actually improve things. Intervention, economists argued, could provoke moral hazard and pauperism. Inequality, they insisted, was natural. But if the state was already intervening, then inequality was no longer natural; it was a policy outcome. The burden of expectation changed and, suddenly, Canada’s upwardly redistributive regressive tax policies mattered a great deal. They brought people out into the streets to protest, in numbers large enough to bring politicians on board.

What Margaret Wente ignores is that policy wonks have a special duty to consider fairness. Whatever the state does, it must do fairly, or at least not obviously unfairly. Whatever choices it makes are deliberate ones and it must brandish a logic of fairness to defend them. No policy wonk can say about a tax policy: “Well, I didn’t really think fairness was a serious concern in this matter so I ignored it.” We may like or dislike their formula for fairness, but we cannot really grudge them the pursuit of such formula, as a hard-wired condition of being a wonk. And in 1917, fairness meant something like “not inflationary taxes and loans that ostentatiously transfer wealth from the producing to the investing classes.” It didn’t mean economic equality, but nor did it mean the measurable increase in inequality that caused even economists to shake their heads in after years. And a policy wonk who doesn’t wonder about how his or her logic of fairness relates to a logic of economic inequality doesn’t really understand how fairness works. You can call economic polarization fair and natural when it rests on “the economy” but you cannot call it fair and natural when it rests on the state. Classic liberal economists insisted on a small state precisely so that they could call economic inequality “fair.” Arguing about whether our taxes are fair, both in relation to other taxes and in relation to wealth and poverty writ large, is one of the hardest things we do, and one of the best and most important. Graduated income tax was the “quintessential progressive reform”[4] and remains the quintessential enemy of the ideological right.

But Wente’s argument can get us to deeper truths about the fabric of Canadian history. Arguments about economic inequality take up remarkably little space in textbooks of early Canadian history. Seemingly, Canadians really didn’t care about economic inequality. That’s the conclusion arrived at by some of the most famous early social investigators. Lord Durham in 1838 and André Siegfried in 1905, both of them wonkish elites, both came to Canada expecting to find the kind of social politics, concerned with economic inequality, that they saw in their native England and France. Both expressed surprise to find that “the race question” dominated the social question. In fact, there were many complaints of economic inequality by Patriots as by Progressives. But that makes the observations all the more remarkable. Classic Canadian political culture was an efficient machine for turning social questions into “racial” ones. Finally something we’re uniquely good at!

Most of the really serious Canadian disputes, including Confederation and the conscription crisis, intertwined social and ethnic politics. Political bosses continually translated such arguments into one another. George Brown despised the Union of the Canadas because he thought it was downwardly redistributive; he railed against French Canadians as being too poor as well as too few to deserve their political clout. Reformers tended to legitimate their attacks on racialized populations, including Indigenous and Chinese peoples, by appeals to tax fairness. Canadians continually argued about economic inequality, about relations between the “haves” and the “have-nots.” Those arguments persisted into 1917 and they shaped election campaigns. Each party championed income tax and denigrated the other’s progressive credentials. Laurier’s Liberals insisted that Borden’s was the party of the reactionary millionaires; Borden’s Unionists insisted that Laurier’s was the party of the reactionary French Canadians. No, insisted the Liberals ever more stridently, this was really a fight about plutocracy. No, responded the Unionists ever more stridently, this was really a fight about French-Canadian selfishness. 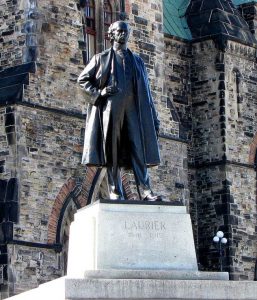 Wonks had their own analyses but they were practically silenced by the fierceness of the fight, as ordinary partisan rivalry degenerated into something much uglier. The Winnipeg Telegram, published by M.E. Nichols, declared that a vote for Laurier was “a vote to establish tyranny, lawlessness and terror.” And Nichols wasn’t just a publisher; he also ran Borden’s national propaganda office. “Tyranny, lawlessness and terror”? Laurier? Canadians should spare a thought for how such rhetoric would sound in a newspaper today. Debates by policy wonks about how to read data seem comparatively benign. That’s what stability looks like. Harvard political scientist Tom Nichols remarks: “For years, I said Obama foreign policy was like a bunch of IR grad students. This is now the opposite, and I would gladly take them back.”[5]

Let’s get back to that yawning gap between opinion and expertise (so nicely analogized to income percentiles—the 1% versus the 99%—as if knowledge itself could be measured in finite percentiles). Where wonkish elites see themselves as mediators and mitigators of economic inequality, Wente sees them as polarizers in their own right. And intellectual polarization veils economic polarization for Wente: a more recent column denounces current tax reforms as a declaration of “class warfare.”[6] Where I see styles of argument that can pull either towards technical evidence or towards hateful ad hominem attacks, Wente sees the two as virtually interchangeable. Overheated rhetoric of that sort probably elicits the page clicks that keep columnists on staff at newspapers like the Globe and Mail. But it may prove toxic for moderate and civil debates about evidence for and against fiscal fairness.

Of course, I’m a university professor, so my defence of wonkishness is predictable; that’s the way ad hominem arguments work. But historians probably have more in common with Wente than with the economists. We both truck in common-sense readings of mass behaviour, of what “Canadians” want, as much as in empirical data. My description of Canadians in 1917 looks a lot like her contemporary Canadians, barring my attachment—more romantic than wonkish—to historical fact. But if history teaches one thing here, it’s that ad hominem arguments, of the sort seen in 1867 or 1917, tend to prove fiscally regressive.

E.A. Heaman is an associate professor in the Department of History and Classical Studies at McGill University. Her new book, Tax, Order, and Good Government: A New Political History of Canada, 1867-1917, is published by McGill-Queen’s University Press.

[2] Kenneth Scheve and David Stasavage, Taxing the Rich: A History of Fiscal Fairness in the United States and Europe (Princeton, UP, 2016).

One thought on “What does the coming of income tax tell us about “fairness” in 1917?”