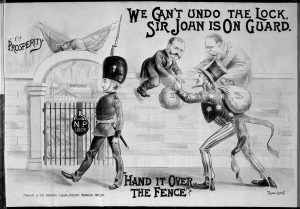 In 1891 and 1911 it was the Conservatives who were opposed to free trade – reciprocity – with the United States. “No truck or trade with the Yankees” was the successful Tory rallying cry in 1911 against a trade agreement made by the governing Liberals and already passed in the U.S. Congress. Twenty years earlier, Sir John A. Macdonald had opposed the Liberal Party’s reciprocity platform and defended his protectionist National Policy. In 1988, the two parties’ positions were reversed, with the NDP also opposed to the Canada-United States Free Trade Agreement, NAFTA’s precursor. These three elections are notable for the ways in which proponents of free trade were accused of treasonous actions, though such charges are more telling of the pull of anti-US sentiment in Canada. “You cannot get anything by kissing the feet of the people of the United States,” Macdonald told voters in 1878, the year he won re-election on the promise of introducing the National Policy.[2] One hundred forty years later, we find none of the major political parties in Canada advocating such a stance, even as the current occupant of the White House is an easy, obvious, and, above all, deserving target of anti-American jingoism.

So why the apparent consensus on NAFTA? Is the reason, perhaps, that no Canadian politician wants to be in bed (figuratively, literally) with Donald Trump? Has loathing for Trump and an aversion to being aligned with him on the issue of free trade caused cross-party support for NAFTA? Or have Canada’s three main political parties become such strong free traders that they are willing to avoid partisan sniping? Or are Canadians in fact far less anti-American than we seem?

For all the partisanship of the free trade elections in Canada’s past it is worth keeping in mind that there have been moments of political cooperation on this file. The US decision to cancel the Reciprocity Treaty of 1854 was, after all, a step that alarmed many colonial subjects in British North America and became a cause of Confederation. And before turning to the National Policy, in 1871 John A. Macdonald had sought a renewed reciprocity agreement as a means of kick-starting the new country’s ailing economy. Though unsuccessful, he likely would have had the support of the Liberal Party of such classical liberals as George Brown and Alexander Mackenzie (who sought their own abortive free trade deal with Washington in 1874).

Six decades later, in the midst of the Great Depression, R.B. Bennett concluded an agreement with F.D. Roosevelt that liberalized trade in certain sectors but fell short of his boast that he would “blast” Canada’s way into world markets. Unfortunately for Bennett, he was turfed from office before the deal could be signed. That duty fell to William Lyon Mackenzie King, who did so and faced little criticism from Canadians for whom the results of protectionism were then on full display. A further and far more expansive free trade deal with the United States was in the works just after the Second World War ended, but King, ever cautious about public opinion, nixed it as likely to be unpopular.

Taking these examples into account, are we to deduce that cross-party support for free trade with the Americans is only present in periods of economic upheaval? Are we in such a period now? Have our close economic ties with the Americans, especially the reliance on the US market, produced a consensus that NAFTA should be defended, albeit tweaked? Relatedly, if perversely, is Trump right and NAFTA is the “worst trade deal ever made” in that it has only benefitted Canada and Mexico? Likely, the three parties are all backing NAFTA at this point because the deal’s end would spell considerable economic upset. But if one of the parties – or a sizeable chunk of Canadians – might perceive a renegotiated agreement as a bad deal, then the comity might end and we could hear cries of “No trade or truck with Trump.” After all, an American target is an obvious one for Canadian politicians, and the current occupant of the White House is an easy target indeed. And with the possibility that a deal may not get done, or that it may face defeat from domestic opposition in any of the three countries, it is worth remembering that for most of Canada’s history the country survived without a Canada-US free trade agreement.

Asa McKercher is an assistant professor of history at the Royal Military College of Canada. He is the author of Camelot and Canada: Canadian-American Relations in the Kenney Era (New York: Oxford University Press, 2016) and co-editor, with Galen Roger Perras, of Mike’s World: Lester B. Pearson and Canadian External Affairs (Vancouver: UBC Press, 2017).

3 thoughts on “No Truck or Trade with Trump? The Puzzling Absence of anti-NAFTA Sentiment in Canada”