Few Prime Ministers have been as interested in history as Stephen Harper. A wag might now say, few Prime Ministers have known so little about it. What is clear, as panels at the CHA, a special Labour/Le Travail forum, and a spate of other critical articles have demonstrated, historians had little time for Harper’s — or, more accurately, the Harper government’s —  historiography, the commemorative practices of his government, the lessons they drew from history, or their sense of the national narrative and what it said about community and nation. 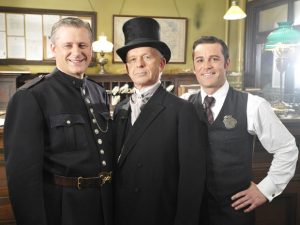 Indeed, Stephen Harper’s historiography seems like a long turn in the wrong direction. The de-funding of the international Canadian Studies program, Parliamentary inquiries into Canadian history, re-branding museums, and a range of other developments stand testimony to the long-term effect that the federal Conservative government sought to have how on Canadians thought about their past both as narrative and with regard to their place in that story. Some of its more grandiose intentions have been scrapped (the Mother Canada commemorative statue, for example), while others have been downgraded or redirected, but all of this begs a question: what legacy did Harper, or more accurately his government, leave on Canadian historical practices? What is the legacy of Harper’s historiography?

This is not my area of expertise and we need to concede that the “dust has not yet settled” on Harper or his legacy, but as a way of beginning a consideration of this issue, we need to properly contextualize Harper’s historiography. It was part of a wider process and was itself multifaceted.

On this commentators are agreed. In other words, the Conservative government did not invent a history, a narrative, and a series of commemorative practices that it tried to impose on the nation but rather worked with a series of themes that had already been circulating, at the time, on the margins of Canadian historical culture. Indeed, things Heritage Minutes, the development of the Dominion Institute, the eventual creation of new journals (such as The Dorchester Review), the Valor and the Horror fiasco date back a number of years.

Harper’s historiography both found an audience and an interest with  veterans’ organizations, some dissatisfied historians, some rich benefactors, and DND funded “strategic studies,” as Ian McKay and Jamie Swift have point out. Through their work, and that of allied think tanks, they developed a palpable sense that Canadian historiography had, as it were, gone off the rails. The best known critiques coming out of this position were of social history, but proponents of this position also faulted the so-called myth of peacekeeping for having distracted Canadians from a more vibrant hard power foreign policy, using historical examples to argue its merits.

What the Harper government did was not to create this disaffection but to work with it. Financial support, say, for educational projects developed and implemented by the Dominion Institute, or recasting the Museum of Civilization as the Museum of Canadian History, or rewriting the Citizenship guide, built a new space through which specific narratives of nation could be re-articulated and re-circulated in and through Canadian society. In effect, the emergence of this space is interesting not because professional historians should have a monopoly on history, commemorative practices, or narratives, but because it amounted to a perceived need to abandon the mainline institutions of historical practice in Canada and forge new ones.

History is, of course, a vast and diverse network that encompasses a range of practices on local, provincial, national, and transnational levels. But, taken together, I wonder if there has been, at least since the professionalization of Canadian historiography, discussed so effectively by Don Wright, such a concerted effort to build a new body of historical practice that stood in opposition to the innovative practices of the previous generation. Social history, as a counterpoint, was not always accepted by all professional historians, but the profession proved remarkably flexible and adaptive, integrating new conceptions of research, establishing new groups and prizes, and broadening the base of teaching, particularly at the post-secondary level.

Harper’s historical practices — and its proponents — were openly hostile to these developments and looked to forge, as it were, a different space within which their conception of the past and its significance held sway. To do so, they looked to a semi-professionalized set of practices that connected them to some historians but which stood on the margins of Canadian historical scholarship. Their goal, in other words, differed from that of the social history (in all its shapes) that so deeply concerned them: they did not seek to engage the historical profession and convince it of the merits of an alternative approach to the commemoration, research, or narrative. Instead, they worked outside these institutions while using what power they had in government to channel funds into a different institutional network of historical practice.

The key lesson that I would draw from this project is not necessarily the narrative it promoted, because its ideological implications have already been explored, but the degree to which this project failed.

That might sound odd. After all, Harper’s government had an impact on international Canadian Studies funding, the Museum of Canadian History, raising Remembrance Day to something of a religious ritual, and a memorial to the victims of communism. Yet, my sense of the matter is that they convinced almost no one of the merits of the narrative that they tried to promote, if one did not already believe in it.

The Dominion Institute, now part of the Historica Foundation, has developed new diversity projects. Remembrance Day is more solemn but I wonder if the newscasters who repeat the same lines year after year really recognize what they are saying and, if they do, does it have any impact on their lives or their thinking? The Canadian Historical Association remains the center of professional historical scholarship in Canada and, all the time it seems, new bonds are forged between professional historians working museums, the academy, and historic sites, subverting, it seems to me (from the crass political perspective his government took to these relationships), one of the institutional spaces with which the Harper government would have liked to work.

There is something odd and …  almost …  sad about the institutional framework of Harper’s historiography. If the Harper government — and its intellectual allies and supporters — wanted to use history as a mirror of the nation, it was a mirror that they had to craft themselves. They could call it education or complain about the biases of previous governments, but they ultimately failed to lead the grass root insurgency against Canadian historical memory that they wanted to lead.

Harper’s historiography ended up reinforcing an institutional process that predated his government, but it was unable to actually redirect the general trajectories of Canadian public life through their historiographical practices. For good or ill, Canadians continued to see Charter rights as a triumph, support peacekeeping even if it was a myth, and flock to heritage villages that portray social history.

I wonder, then, if the ultimate legacy of Harper’s historiography might be considerably less than he would have liked.