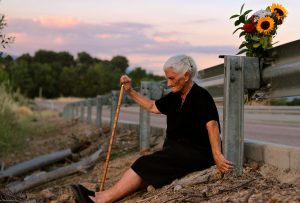 The Silence of Others tells the story of the struggle for justice in Spain following the dictatorship of Francisco Franco.

The Silence of Others has its North American premiere on Friday April 27 at 6:30pm at TIFF Bell Lightbox 2 in Toronto. It is also being shown on Saturday April 28 at 12:30pm at TIFF Bell LIghtbox 3. The directors and individuals featured in the film will be at both these showings and available for discussion and questions. There is a third showing on Saturday May 5 at 11:45am at Scotiabank Theatre, Cinema 3. A wide Canadian release is also planned.

On November 20, 1975, Francisco Franco died, ending his nearly 40 year rule of Spain. While his death marked the end of his dictatorship, it also started the long process of coming to terms with the violence and suppression that marked those years. To address this, the Spanish government passed an amnesty law in 1977. The law not only provided amnesty to those who had been imprisoned for political reasons, but also those who had been part of the ruling party.

As a result, those who had perpetrated violence, including murder, throughout the Franco years would never be brought to justice. The overarching motivation for the amnesty law was that the country needed to forget what happened in order to overcome the political and social divides forged over the previous 40 years. ‘Why rehash the past?’ people would ask. ‘Just forget about it and move on.’

For the victims and their families, however, simply forgetting and moving on was not an option. Those who had been tortured for their political views or had loved ones murdered by a repressive regime were subjected a new form of suppression. Not willing to accept this, however, a dedicated group started to challenge the law and in using universal justice, a court in Argentina decided to hear their stories.

The movement and the subsequent lawsuit is the subject of the new documentary The Silence of Others. Following survivors and family members of those murdered by the regime, it tells a powerful story. It follows the highs and lows of fighting a battle through the courts in a country where a sizable percentage of the population has no desire to litigate the past. The raw emotion of those profiled, however, highlights the need to understand and remember what happened.

While the film is about Spain, it contains many universal truths. Similar stories where marginalized individuals struggle for recognition and justice could be told in pretty much every country around the world. The Silence of Others, therefore, has a message that will resonate with audiences far beyond Spanish borders.

In this episode of the History Slam, I talk with Almudena Carracedo, one of the film’s directors. We talk about the amnesty law in Spain, the concept of universal jurisdiction, and how they came to this story. We also talk about the challenge of telling this story, the choice of images, and capturing emotion on camera. We finish with a chat about social memory, memorialization, and following the story moving forward.

One thought on “History Slam Episode 114: The Silence of Others”