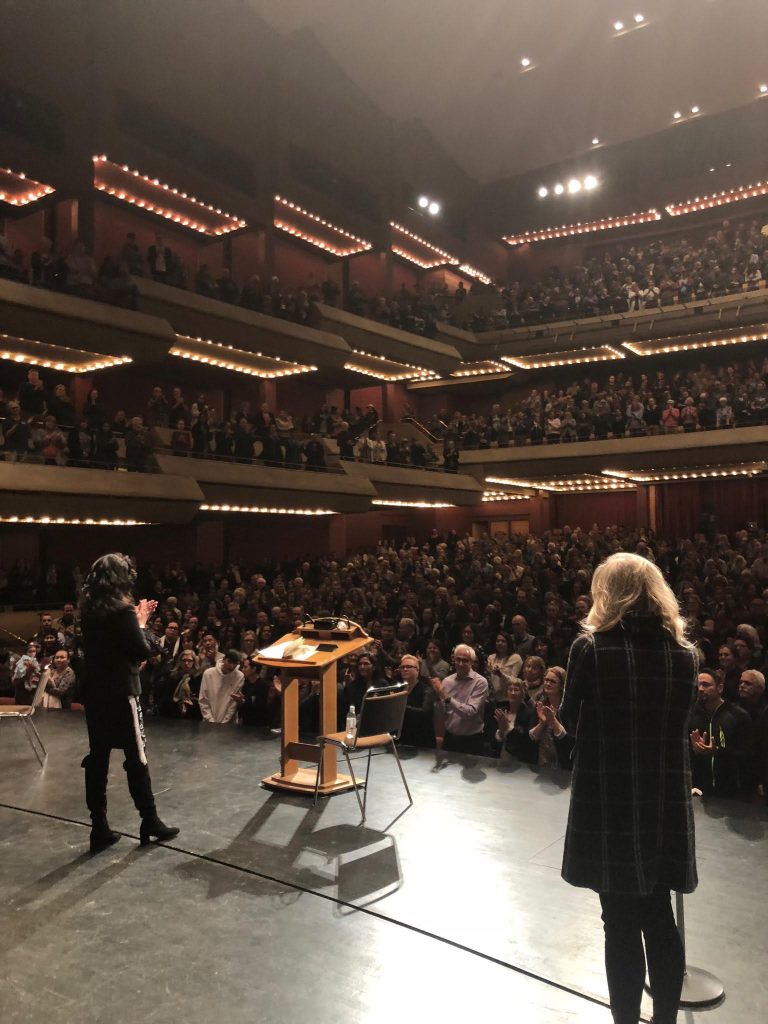 Alvin Fiddler, Grand Chief of the NIshnawbe Aski Nation, tweeted this the night of the Thunder Bay lecture. “Thunder Bay, you are beautiful. Chi Miigwetch for coming out to hear @TanyaTalaga deliver the first of her #MasseyLectures. What an incredible evening. #FullHouse”.

On October 16th I witnessed (and there is no better word for it) close to 1500 people come together in the Thunder Bay Community Auditorium to hear the first of Tanya Talaga’s CBC Massey Lecture series, “All Our Relations.” Based on the recently published book of the same name, a product of her year long Atkinson Foundation Fellowship “All Our Relations” explores the rising suicide rates of Indigenous youth in Canada, Brazil, Australia and Norway.

Why Tanya Talaga, why Thunder Bay, and why was I there?

Talaga introduced her lecture joking about the pantheon of Massey Lecturers she was joining – a formidable list indeed. “These illustrious people” she said, “have three degrees, they are people of letters; they probably don’t share their bathroom with their teenage kids. They probably have ensuites.”  Despite her modesty, and despite the fact that the list of Massey Lecture luminaries – since 1961- includes only one other Indigenous person (Thomas King), there’s no question this is a club in which Talaga belongs. Her work has had such a powerful impact, and nowhere more so than Thunder Bay.

Talaga is a Toronto Star journalist who was sent to Thunder Bay in 2011, in the midst of a Federal election, to do a story on Indigenous voting behaviour. She switched gears to the story of Indigenous student deaths at the insistence of the Indigenous leaders she was interviewing for the voting story. A good journalist follows where the story leads them, and Talaga is a good journalist. Talaga’s first book Seven Fallen Feathers, Racism, Death and Hard Truths in a Northern City rose to meteoric heights when it was published last year. It tells the stories of seven Indigenous youth who died while attending high school in Thunder Bay, far from their homes in various Northern communities, between 2000 and 2011. She puts the lives and deaths of Jordan Wabasse, Kyle Morrison, Curran Strang, Robyn Harper, Paul Panacheese, Reggie Bushie and Jethro Anderson into clear historical context, covering the specifics of colonization and the education system especially in Northwestern Ontario.

It’s obvious that she was quicker than many to realize what was happening in Thunder Bay in 2011 because of her relationship to the place. Her mother is from the Fort William First Nation.  Talaga grew up in Southern Ontario but spent her summers in and around Thunder Bay with the Indigenous side of her family.  So when she started hearing about Indigenous children appearing dead in the rivers that run through Thunder Bay, it wasn’t just her reporter’s instinct that drew her to ask questions. Thunder Bay does not have a reputation as a safe place for Indigenous people, and at the time these stories began receiving public attention, things were getting worse.

The inquest into several of these deaths, that took place in 2015-2016 (after years of pushing on the part of the Nishnawabe Aski Nation) exposed the ongoing, systemic racism of everyday Indigenous life in Thunder Bay. The official handling of the deaths was appalling: police issued two line reports with barely an investigation; so too the coroners; in some cases officials never contacted parents. Canadian national media found their way to the story, and there was plenty to report. In 2015 Thunder Bay lead the nation in reported hate crimes. In 2016 and 2017 there were two further inquiries into police investigations of Indigenous deaths, one led by Justice Murray Sinclair.  Meanwhile the violence continued. In 2017 a car full of young white men sped past two Indigenous women on the street one night and hurled a trailer hitch out the window, hitting (and eventually killing) Barbra Kentner.  “I got one,” Kenter’s sister heard him yell.  Attempting to defend the reputation of Thunder Bay, Facebook groups and hash tags provide a steady stream of white supremacy. All of this and more is explored in Ryan McMahon’s powerful podcast series “Thunder Bay,” which premiered October 21st on CANADALAND.

Talaga told us that when she was asked to give the lecture series she responded with one condition: that the series begin in Thunder Bay. “That’s where it all began,” she said, introducing her mother and grandmother who were both in the audience, and linking them to all her relations. “Where it all began” of course also refers to the stories of Thunder Bay’s horrific past and present that brought Talaga’s writing and research to national attention. She gave her talk standing in front of murals painted by art students from Denis Franklin Cromarty School, the high school attended by the Seven students. In this, and in the words of introduction and conclusion by various members of Thunder Bay’s Indigenous communities, I saw another reason Talaga wanted this to begin in this particular town. 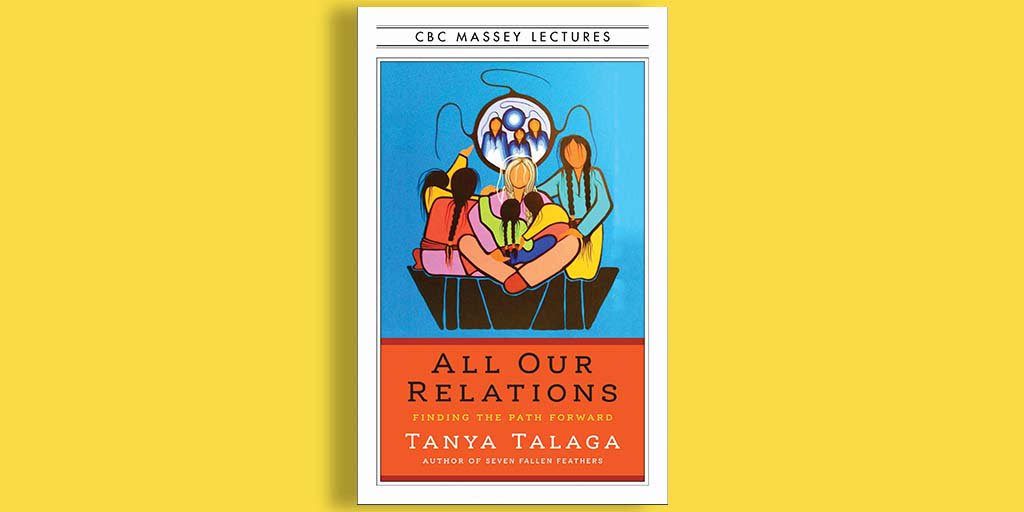 One of the main messages of All our Relations is that healthy communities create healthy children. While the new book tells a broader story than did Seven Fallen Feathers, its pretty clear that Thunder Bay is not a healthy community; and not only due to this violent history. “So you see, Thunder Bay,” began the last line of Talaga’s talk, continuing with the need to work together. The implication of addressing the assembled 1500 Indigenous and non-Indigenous people as a community was made obvious by Sam Achneepineskum, elder from Fort William First Nations who closed the evening. I know there are some really bad stories about Thunder Bay out there, he said, “and that some of you are hurt by them.” The way to fix the town’s reputation, he continued, was to work together. And then he made 1500 people, who had all just listened to an hour long lecture on suicide, laugh uproariously when he said, (on the eve of Canadian marijuana legalization) “Tomorrow we should all go buy some weed and just chill out.”

So why was I there? While I now live in the opposite end of the province of Ontario, in Kingston, I grew up in Thunder Bay. As soon as I learned about Seven Fallen Feathers, I invited Talaga to my university, Queen’s, to give a talk. In September 2017 we were her second gig, she had just launched the book a few days before in Toronto (and I spend that year happily watching its success.)  Fortunately I had read an advance copy from the publisher so when she asked me why we’d invited her I could say more than “because I’m from Thunder Bay” but in truth that’s the reason. It still is. That’s why I also knew I had to fly to Thunder Bay see her speak to my hometown audience. I’ve spent the year since Seven Fallen Feathers was published haunted about this place I left in 1977. Wondering how it was that my family had a Norval Morriseau painting on our dining room wall, while we never had an Indigenous person join us for a meal.  Thinking about my NDP, civil rights era parents, who talked to us a lot about racism but never about race. I grew up knowing that racism (discrimination we probably would have called it) was wrong, that my father was on the Board of the Indian Friendship Centre and quit our United Church when they refused a Native youth group access to church buildings. And that was something to be proud of. But I had not a single Indigenous friend, acquaintance or even classmate – that I remember or registered in my consciousness – in all my years of education.  The one exception: the adopted boy next door. Later, when I learned about my Ukrainian immigrant grandparents’ involvement with the Communist Party, and Thunder Bay’s radical labour and working class past, I took this aspect of the place on as my own. I still do. But the lives and circumstances of the original inhabitants of this region rarely entered that story either.

Witnessing Tanya Talaga, and a stage full of local Indigenous drummers, singers and political leaders speak to Thunder Bay was a privilege beyond belief.

Karen Dubinsky teaches in the departments of History and Global Development Studies at Queen’s. Tanya Talaga’s Massey Lectures will be held through October in Halifax, Vancouver, Saskatoon and Toronto.  They will be broadcast on CBC Ideas November 12, 2018.