News from Mexico is often baffling and extremely sad. Bulletins regarding the country’s devastatingly high murder rate, the activities of organized crime and lethal attacks on journalists are common. Such tensions are endemic in the country that in July gave a landslide victory to Andrés Manuel López Obrador, commonly known as AMLO, running on an anti-corruption and anti-violence platform. The new government will face severe challenges when sworn in on December 1. As that date approaches, Mexico confronts the 50th anniversary of an event that haunts the country and underscores its persistent political instability. 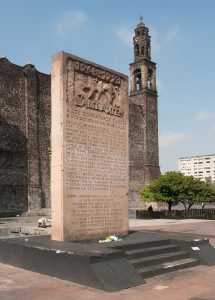 On October 2 1968, troops (a shady group of out of uniform military intelligence operatives and secret police) opened fire at student protesters in the Plaza of the Three Cultures at Tlatelolco in downtown Mexico City. The massacre took place days before the opening of the 1968 Olympics. It was the nadir of months of conflict between protesting students and a government bent on quelling what it regarded as a communist inspired insurrection.  Contemporaneous accounts by media sympathetic to the ruling party put the casualty figure at about 40 persons. That number is lamentably off target. Eminent Mexican historian Enrique Krauze and others believe that hundreds of students were killed that evening.

Nobel laureate poet Octavio Paz heard the news in India where he was serving as Mexican Ambassador. Two days later he resigned his post. Paz then composed a raging poem in response the acts of the government he once served,

Guilt is anger turned against itself: if an entire nation is ashamed it is a lion poised to leap.   (The municipal employees wash the blood from the Plaza of the Sacrificed.)

Tlatelolco is the site of an Aztec ruin, a Catholic church, buildings housing Mexico’s Ministry of External Affairs and archives. It is surrounded by tall apartment blocks. On October 2, 1968 government sharpshooters fired from the rooftops of some of those buildings at students in the square below.

Activists and Mexico’s cultural leaders have grappled with the event ever since. Their efforts prove that memory and hard work can overcome the official state story. In 1971, journalist Elena Poniatowska produced a magisterial history La noche de Tlatelolco (Massacre in Mexico). Her shocking findings of government-led mayhem have largely been substantiated by further investigation. Cultural theorist Carlos Monsiváis deemed the tragedy, “the most significant event of the history of Mexico in the second half of the twentieth-century.”  In 1989 Jorge Fons directed a disturbing feature film Rojo Amanecer (Red Dawn) about a family living in an apartment overlooking the square. The family in the drama is almost entirely wiped out by Mexican military assassins. The film’s release was delayed by government censors. It has since gone on to reach a wide audience and has won several awards including Ariels, Mexico’s Oscar, for Fons and the leading actors plus a Special Jury Award at the San Sebastián International Film Festival.

The tragedy at Tlatelolco occurred during the Cold War when some Latin American governments toed Washington’s line about the red menace. It was less than a decade following the Cuban revolution – an insurrection plotted in part by Fidel Castro, Che Guevara and others  in Mexico City before their fateful voyage aboard the Granma to Cuba. In the spring and summer of 1968 students in Paris and other cities challenged their governments in the streets over local grievances, the war in Vietnam and the pace of decolonization. That same summer the Prague Spring of Czechoslovakia was crushed by Soviet tanks. Against that background of tumult, Mexico planned to welcome the world to the Olympics. The governing semi-dictatorial Institutional Revolutionary Party (PRI) which had controlled Mexico since 1929 was not about to brook students casting Mexico in a bad light by demanding democratic reform.

Students at a number of post secondary institutions in Mexico City and in other parts of the country began a series of protests and strikes over the summer. As the movement intensified the PRI government of President Gustavo Díaz Ordaz began a crackdown and ramped up a dirty war against its opponents. His government assured its allies in Washington that the disturbances would be quelled before the Olympics began. Meetings were sometimes disrupted by police violence and campuses were invaded in paramilitary fashion. Many activists simply disappeared. On at least one occasion various factions exchanged gunfire. On other occasions unarmed students were viciously attacked by groups of men without uniforms.

Investigations by journalists at the magazine Proceso, the daily La Jornada and others have since revealed that a rump group of officers took matters into their own hands and led the violence. This group of hard core anti-communists organized a brigade of soldiers and veterans to infiltrate and attack the students. In recovered film footage and still photos of the chaos after shots were fired in Tlateloloco, members of this brigade are recognizable by white bandanas tied around one wrist as unarmed protesters are beaten and arrested.

Documents have since revealed that the Red Scare was overblown. Just three days following La Noche Triste (sad night) of Tlatelolco a CIA communiqué stated that despite the claims of the Mexican government there was no evidence of a communist conspiracy. A subsequent investigation of the US Defence Department put the number of dead at Tlatelolco between 150 and 200. In 1977 the year Díaz Ordaz was named by a subsequent PRI government as Mexico’s ambassador to Spain, the ex-president continued to dispute the death total. He said he was proud of serving and saving his country. It’s no wonder many Mexicans believe that the impunity that bedevils their society starts at the top.

The disputed and somewhat incomplete history of what occurred at Tlatelolco 50 years ago tomorrow is symptomatic of the troubled and state of democracy in present day Mexico. In 2014, 43 student teachers disappeared from Ayotzinapa in the state of Guerrero and are presumed to have been murdered. According to British journalist Ioan Grillo those students had been memorializing the massacre at Tlatelolco prior to their own victimization. Their fate is largely a mystery. Claims of the outgoing PRI government of Enrique Peña Nieto to have solved that case have been rubbished by human rights and legal experts. The incident further tarnished that administration and contributed to AMLO’s political resurrection.

In early September, students were attacked by hoodlums known as “porros” at UNAM, The National Autonomous University of Mexico, the country’s largest university located in Mexico City. The porros used gasoline bombs, rocks, sticks and knives. The rector said UNAM was infiltrated by outside agitators that want to destabilize the university. Following the violence UNAM students staged a march protesting the recent violence and honouring the spirit of resistance at Tlatelolco and the student movement of 1968. 50 years on, both the memory of October 2, 1968 and societal unrest remain obstinate in Mexico. The film Rojo Amanecer concludes as youngest son Carlos, the only surviving member of his family, staggers down the stairs from the family apartment overlooking Tlatelolco square. As the sun rises and a municipal worker washes away blood and sweeps up debris, a traumatized Carlos crosses paths with armed soldiers and walks out of frame.

James Cullingham is a documentary filmmaker, historian and journalist with Tamarack Productions in Toronto. His latest film Jim Galloway – A Journey in Jazz was released in June, 2018

One thought on “Tlatelolco – Massacre in Mexico 50 years on”