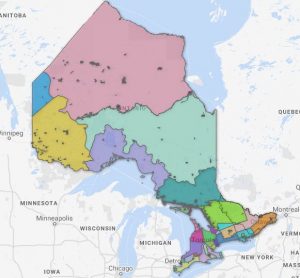 Have you ever wondered why the treaty for the territory you live on is named as it is? Why are some numbered and some named after people? Why is the Toronto Purchase also known as Treaty 13? Why are there two Treaty 3s in Ontario? No doubt that Ontario’s treaty history is the most complicated in the country, with the most treaties and the most varied naming conventions. This article is an attempt to clarify some of the messiness.Treaty making has a long and complicated history in Ontario. Historians have identified three phases of treaty making between the Crown and Indigenous people that date to the seventeenth century: commercial compacts of the fur trade, peace & friendship treaties related to military alliances, and territorial treaties related to land surrenders. This demonstrates a long treaty making tradition that followed Indigenous protocols (exchanging gifts, wampum, feasting, etc.), the territorial treaties began in earnest after new guidelines and protocols were established by the Royal Proclamation in 1763 .

Especially after the War of American Independence in 1783, a series of land agreements were negotiated by Indian Department officials on behalf of the Crown with the different Anishinaabe peoples inhabiting the lands along the north shore of St. Lawrence River and Lakes Erie and Ontario so that Loyalists could settle and farm in Upper Canada. By the outbreak of the War of 1812, some 15 land cession treaties had been signed. In the response to the rapid influx of new settlers to Upper Canada after the war, nine more treaties were concluded, opening the interior lands to a new wave of settlement. The results are what we now call the Upper Canada or pre-Confederation Treaties.

At this point we should clarify the terminology. Although they often all get categorized as “treaties” today, in the 19th century the land deals were recorded in granular fashion with each deed, grant, surrender, cession, etc. recorded as such. A series of such land deals were often considered part of the same general treaty, and this is the logic behind the letters or fractions that can follow, for instance with Treaty 3 or 13, which have 3 ½, 3 ¾, 13A, etc. 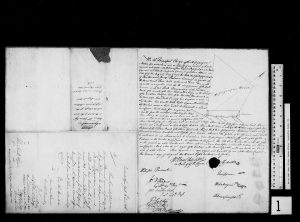 The signature page from the Head of the Lake Purchase

To add a complicating factor, there are two distinct numbering systems in Ontario: one for pre-Confederation, one for post-Confederation. The former covers the century from the 1760s to 1860s, and many of these treaties, of which there are hundreds, are obscurely documented: No. 1 was signed in 1781 at a crucial cross-roads of the Great Lakes, Michilimackinac, but it is little known today because the land ultimately ended up in the United States. The latter numbering system covers the post-Confederation period. This is the system of “numbered treaties” most familiar to Canadians, stretching from Northern Ontario across the prairie provinces.

An important transition happened in the mid 19th century. As resource extraction moved northwards, two treaties with the Anishnaabe of Lake Superior and Lake Huron were concluded, known as the Robinson-Superior and Robinson-Huron Treaties in 1850. This model of concluding agreements with numerous bands for large tracts of lands, often including annuities and hunting and harvesting rights in traditional territories, would become the formula for the post-Confederation “numbered treaties”. Most of the remaining unceded lands of Canada-West around Georgian Bay were also covered by treaties with agreements for the Saugeen (Bruce) Peninsula in 1854 and for Manitoulin Island in 1862. After Confederation, the new Dominion of Canada concluded three separate treaties covering the northern regions of Ontario: Treaty 3 (1873), Treaty 5 (1875 and 1906), and Treaty 9 (1905 and 1929-30) In 1923, two more treaties, the Williams Treaties, covering sections of the north shore of Lake Ontario and central Ontario were negotiated to deal with uncertainties left behind by earlier agreements.

Many treaties are named after the Crown’s lead treaty commissioner. This is the case with the following Ontario treaties:

The numbered treaties in Ontario often have colloquial names, like Treaty 9 – “the James Bay Treaty”, or Treaty 3 – “the Northwest Angle Treaty”. Many people still use these today. The only treaty (that we’re aware of) named after an Indigenous person is Treaty 19, or “the Ajetance Purchase”, signed with the Mississaugas of the Credit in 1818, and named for Chief James Ajetance (or Ajetans). A rather unusual colloquial treaty name is the “Gunshot Purchase,” also known as the Johnson-Butler Purchase, which was supposed to include all of the land within earshot of the sound of a musket fired along the shoreline. 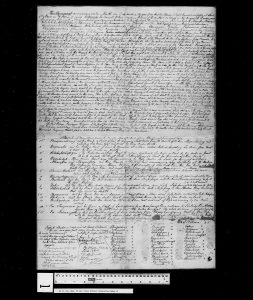 The complicated history of the numbering systems are tied to the record-keeping of the Department of Indian Affairs as part of the Indian Treaties and Surrenders (ITS) collection. While the records of the Department of Indian Affairs, RG10, hold many copies of these treaties,  they were originally held as a distinct collection of materials. The collection was organized by departmental officials in the 1880s with the documents originally sorted chronologically with the oldest document being listed as “ITS 1” and all others numbered consecutively. As John Lesley notes in his essay (link below) on the collection for Library and Archives Canada (LAC), the numbering system is somewhat quirky. In one example, a copy of a treaty at Niagara concluded in 1781 between Guy Johnson and Mississauga and Chippewa of the western region of Lake Ontario was lost but located in 1896 by the Department of Crown Lands in Toronto. Because there was no obvious treaty to which it could be appended, it was added at the end of the sequence, as Treaty 381. It should be noted that the ITS collection also has a number of related documents to the treaties such as maps, annuity pay lists, and reports.

New tools like this map and this map are providing Ontarians with more learning opportunities into this important topic. If we are all to be treaty peoples, as is emphasized in citizenship oaths and educational campaigns, we must all learn about this history, the shared collective history of Indigenous and non-Indigenous peoples on this land. The TRC Calls to Action include calls for public servants to learn more about treaties, and for governments to make curriculum on numerous subject, including treaties (Nos. 57 & 62 respectively). We hope this article helps explain some of the complexities regarding how treaties are named.

Daniel Laxer is a research adviser in the Ministry of Indigenous  Affairs. He graduated with a PhD in history from the University of  Toronto in 2015 and has published articles in the journals of Ontario  History, Material Culture Review, and the Journal of Canadian Studies.

Jean-Pierre Morin Is the departmental historian for Crown-Indigenous Relations and Northern Affairs Canada and Indigenous Services Canada, as well as an Adjunct Research Professor in History at Carleton University. He is the author of Solemn Words and Foundational Documents: An Annotated Discussion of Indigenous-Crown Treaties in Canada, 1752-1923 (forthcoming).

Alison Norman is a research advisor at the Ontario Ministry of Indigenous Affairs. She is also faculty in the Frost Centre for Canadian Studies and Indigenous Studies at Trent University. She has published articles in Indigenous women’s history, culinary history and the history of education.

One thought on “A Short History of Treaty Nomenclature in Ontario”