Last week I was taking an evening walk – the kind recommended by your doctor, as in “get some exercise” – and I strolled by the Sackville NB skate park my son used to frequent. That was a while ago. The park is different now. There is a graffiti wall and the ramps and jumps had been modernized. Hanging near it, affixed to a power pole, was a Remembrance Day banner. They actually fly all over town, or at least along a number of streets. 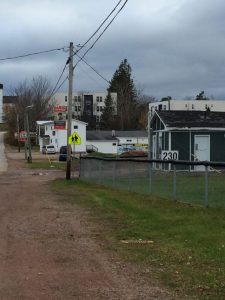 The banner in question

This juxtaposition of the skate park and the banners struck me as a remarkable and important disjuncture in cultural memory. How many of the kids frequenting the skate park, I wondered, thought about the memorial that flew next to them? The scene was made even more complex by construction in the next lot over where the town was repairing the local ball fields. The look was not surreal – a overused word – but it was odd.

Remembrance Day is politically and historically controversial. A friend and colleague of mine studies Remembrance Day and the ideal of sacrifice as it is constructed in history and changes over time. He is much better placed to talk about the politics of Remembrance Day than I am. Instead, what I’d like to focus on is how it is received now and where it sits – the role it plays – in our contemporary culture of memory.

Remembrance Day is an international commemoration. The New Zealand, RSA defines its importance as follows: “Remembrance acknowledges the personal courage and sacrifice of those who are engaged in military and police service by activities designed to highlight and honour their commitment.”

In Canada, it – and the history it is meant to commemorate – are marked in a range of ways. The laying of wreaths in Ottawa is a nationally televised event replicated in towns and cities across the country. Highways are now sites of commemoration. Heritage houses like Guelph’s McCrae House can be visited, and the internet is populated with sites that mark the date and its significance in official and national memory (for instance, see The Memory Project, “Lest we Forget”). I have friends for whom Remembrance Day is a vital and solemn day of self-reflection. For the Conservative Harper government, it was part of a broader discourse of militarization that linked, as Ian McKay and Jamie Swift have noted, Canada to a masculine martial ethic.[1]

The most recent Government of Canada commemorative projects remake Conservative memorialization in significant ways. The 2018 “Our Freedom” video is, in some ways, subtle by comparison with the overt militarization of Canadian memory mapped by McKay and Swift. Overt displays of military apparel or scenes of masculinized marital actions are limited. The 30 second clip shows people who are ordinary by any standard stating simply “I am free”. The images that pass through the video are multicultural and intimate multilingualism. The web site that houses the videos invites the audience to “join the conversation” and provides easy ways to promote the video and remembrance on a range of social media. Other parts of the web site take a more traditional and established approach, reproducing images and recollections of veterans and commemorative ceremonies. Peacekeeping figures prominently in the recollections. A new focus – a new point of emphasis – this year seems to be the “100 Days” that marked the end of fighting on the Western Front. A trailer points to the role Canadian “victories” played in ending the conflict, at least in France and Belgium.

For all its different points of emphases, however, the message carries with it strong continuities. It connects military action with freedom, suggesting that it is the willingness of others to fight in foreign wars that guaranteed Canadian freedom at home. Its history is important for precisely this reason: the history of war is not the history of war but the story of Canadian democracy. The proper approach to this past is to acknowledge its significance and honour and respect those who sacrificed. 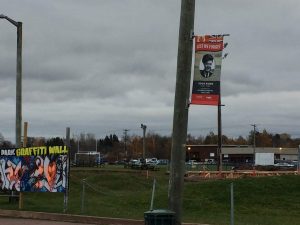 Sackville’s commemoration is more in keeping with themes established by the Harper government. It is co-sponsored by the town and the local Legion. The banners show black and white images of young men in military service framed by a similarly black and white offset landscape; the text notes that they are “honoured” by their families and that the flag is sponsored by the town and the Legion. Sitting atop the images are Canadian and British flags. The objective seems to be to reproduce an image that approximates an old family photo, set against the landscape of conflict while marking the connections between Britain and Canada as a fundamental element of Canadian heritage. As with the more liberal multicultural commemoration produced by the current government, the audience is cued to what is construed as the proper relationship to this past: honour and respect. The added theme is that this is also intensely personal, familial and private (as well as public). To raise concerns about it, if one did, is to intrude on the space and place of families honouring loved ones.

There is a great deal that could be said about the iconography and symbolism organized by these images, but that is not my goal here. What I wonder about is the degree to which they actually make an impression beyond their immediate primary audience (say, veterans and their families). Sitting on light poles, near skate parks and minor ball fields marked by a range of other signs and signifiers, I wondered: what messages do these signs of a solemn past send out? What messages are received? What messages are ignored?

The question, I think, is made all the more pressing by the fact that the audience for remembrance is often the audience who frequents the skate part.  So much of the message is supposedly aimed at students who are being encouraged to learn about this element of Canada’s past and its importance as well as how they should interact with it. I suspect that the banners were affixed to these light poles because they are near a middle school; not because of the skate park.

I think of this same question when I watch the television coverage or news spots on Remembrance Day. So much of the discourse seems to repeat the same lines that we’ve all heard before. Regardless of the degree to which you subscribe to the discourse of “ultimate sacrifice” or “fought for our freedom” (and, like McKay and Swift, I find them problematic, but that is a discussion for another day), does this discourse get worn by overuse? Are the journalists who repeat these lines simply repeating lines that they have heard before and so now come to see as due tribute to the solemnity of the commemoration? The objective of this discourse is to build emotional connections between history – the people who lived in the past, the horrors they witnessed, the goals to which they aspired – and the present. Does repetition wear out this discourse? Does it become trite with overuse?

There are no particularly easy answers to these questions, but an engagement with them might point in a number of directions. Very quickly and without much in the way of sustaining argument, let me suggest what we might learn from such commemorations:

I will confess that it is this last thing that interests me the most. Remembrance Day is supposed to establish a different kind of relationship to the past, one I have called above, emotional. It might do this, but how does it function with other forms of memory (distrust of state, questioning the merits of war, senses of identity that sit outside the specific narrative that is being framed)? My view is: not particularly easily and not particularly well. And, I think, that explains why the proponents of Remembrance Day as a form of national narrative that tied militarization to democracy need to keep repeating their point. They say it, over and over again, but the words have been emptied of content and are simply repeated. The imagery sits amidst a series of other conflicting signs that point not to the plot line they seek to install, but in a range of directions at the same time.

Andrew Nurse is Acting Director of the Centre for Canadian Studies at Mount Allison University.