Party politics made the privacy of the prime minister’s income tax return a sensitive topic in mid-July 1931. On July 16, Prime Minister R.B. Bennett stood up in parliament and declared that the income tax measures proposed in his budget would not benefit him personally, as his Liberal opponents had alleged. If that were so, he bridled ostentatiously, he would be unworthy to occupy his office.[1] 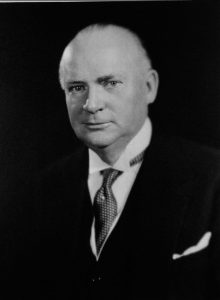 R.B. Bennett, Prime Minister of Canada, 1930-1935. Unconventionally, Bennett was his own minister of finance until February 1932.

It seemed that Canadians would have to take his word for that. Unlike U.S. Presidents today, Prime Ministers then did not disclose their income tax returns. The federal taxman would never tell creditors or fundraisers or mooching relatives how a tax filer was really fixed. And no one would have a chance to see if people who were living large were contributing little.

And yet Bennett’s critics had some kind of information about his tax bill, and they also had a strangely precise count of how many other wealthy Canadians – sixty – would supposedly benefit from the “millionaire’s budget.” Where did they get these numbers, if tax returns were not public records? Not from the crude statistics published by National Revenue, whose reports in the 1930s lumped together all the tax filers with reported incomes above $50,000. (Their number ranged from 259 to 614.)

In 1931, federal tax returns were shrouded in the confidential silence of the tomb. But whether they should be completely private had been fiercely debated during the previous decade. In May 1920, in the waning days of the wartime coalition government, the secretive administrator of the income tax, R.W. Breadner, had come under fire from left, right, and centre. “What is the objection to full publicity?” pushed an MP and veteran of Ypres, Major George Andrews, DSO. Like many others, Andrews thought that information about individuals’ taxes would effectively shame those whose taxes paid seemed strangely small. His opponents argued that the state had no right to make public such sensitive information.

As always, debates in the U.S. sloshed over the border into Canada. In the U.S., the 1924 Revenue Act for the first time required local tax offices to post taxes assessed for named individuals. Delicious gossip swirled. Who knew that J.P. Morgan paid so little compared to John D. Rockefeller? Did Morgan really make that much less?

In Canada, soon after, the Progressive Party’s W.C. Good, MP, economist and farmer, got the King Liberals to launch a parliamentary investigation of the administration of the Income War Tax Act. But the lid of secrecy was slapped on when Good asked that the committee have access to tax returns. By way of justification, Good referred to the Americans’ 1924 move. But the committee chairman suggested forcefully that the Americans were not going to continue with that nonsense. And, in fact, in 1926, tax privacy was reinstated in the U.S.

Meanwhile, the defenders of Canada’s federal tax privacy had not budged.

So how did the budget critics count Canada’s millionaires in 1931? Almost certainly, they used municipal income tax data. Before the 1941 Wartime Agreements, most large Canadian cities – including Toronto – and some small ones – including Ottawa – taxed income. They assessed it in various ways, often inaccurately. To keep assessors honest, the income tax assessments were public. In a remarkable coincidence, on July 17th, the day after Bennett’s offended self-defense in the House, the Toronto Globe editors called for an end to the practice of making the city’s municipal income tax data public. They were shocked that anyone could easily find out how much income tax someone had been assessed for, just by dropping by City Hall. 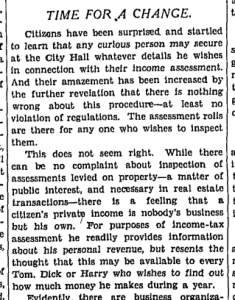 The parliamentary kerfuffle in July 1931 had cost wealthy Torontonians the privacy by obscurity that  their tax returns had enjoyed. Until then, their supposedly public tax information had collected dust in City Hall’s ledgers. But the appetite for equality of sacrifice, sharpened during the Great War, was again being piqued by an emerging social and fiscal crisis. It seems that someone had been poring over municipal tax rolls, for partisan purposes.

Controller George Ramsden, Toronto’s “treasury watchdog,” thought this privacy problem could be fixed in a few hours. But those in favour of openness prevailed, and the city’s income tax assessments data remained public. When the city’s income tax was absorbed into a new provincial one in 1936, however, Ontario adopted the federal privacy practice. Tax conversations in Toronto then lost a source of useful information about who paid what.

Today in Canada, the confidentiality of one’s income tax return is a taxpayer right. But even that right is balanced against public purposes, such as good enforcement. Hence the information exchanges among enforcement agencies to guard against offshore dodging.

In the United States, the privacy right around tax information is still sometimes questioned in liberal free speech terms: the better the quality of the information, the better the public discourse.[2] Facts can be the disinfecting sunlight that drives out ideology. The more open the tax records, the more informed the conversation.

But mostly for good reasons, privacy has been the Canadian norm in tax matters, increasingly so since the 1940s. An interesting exception to that norm was the 1931 challenge to Bennett’s budget. It was informed by fact, and it was effective. The shaming of the prime minister was the reason – or at least the public reason – why Bennett withdrew his income tax measures.

Shirley Tillotson is author of Give and Take: The Citizen-Taxpayer and the Rise of Canadian Democracy and a retired professor of Canadian History at Dalhousie University.

[1] Detailed sources for this piece are available on request. Most are newspaper articles and Hansard. I have also drawn on J. Harvey Perry, Taxes, Tariffs and Subsidies (Toronto: University of Toronto Press, 1955) and my Give and Take: The Citizen-Taxpayer and the Rise of Canadian Democracy (Vancouver: UBC Press, 2017).