Two CBC journalists, Habiba Nosheen and Andrew Culbert, recently reported on the challenges faced by patients trying to sue doctors for medical malpractice. Their story adopts the tone of an exposé. They note that several factors make securing compensation for serious errors difficult, including that most doctors are members of the Canadian Medical Protective Association (CMPA), an organization possessing more than four billion dollars in assets that it can use to defend physicians and, if necessary, pay compensation to patients.

The authors, however, leave unanswered how we got to this situation. That story is long and complicated, but it is worth noting that the CMPA emerged as a solution to Canada’s first medical malpractice crisis.[1] 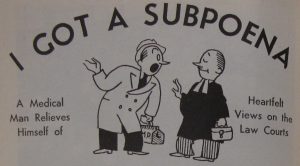 Prior to the last third of the nineteenth century, medical journals, law journals, and newspapers only sporadically mentioned malpractice cases. Newspapers and medical journals, however, referenced American lawsuits, which reflected concerns with the dangers of new medical procedures and highlighted perceived American litigiousness.

By the late 1860s, however, medical and legal journals began detailing instances of medical negligence in Canada and warning that such cases were becoming more numerous. In 1869, the Canada Medical Journal raised the alarm about malpractice allegations. Medical practitioners, said the journal, were “often the victim of vexatious and vindictive law proceedings.” A doctor’s best efforts might fail, and then he falls “into the hands of those prompted by greed and malice.”[2] Dr. William Bayard, in an address to the New Brunswick Medical Society in 1870, warned doctors of the threat of malpractice lawsuits. “Professional standing, character, or rectitude of conduct,” he claimed, would not exonerate a doctor facing a malpractice claim.[3] The Canada Lancet declared in 1881 that suits “for malpractice are the opprobria of surgical practice”[4] and ten years later the president of the Ontario Medical Association complained of malpractice suits, “which of late years have been so numerous.”[5]

Doctors and medical journals lamented the various harms they felt these lawsuits inflicted. They complained about the high cost of formulating a defence. Doctors lost time at work prepping for and attending court, paying lawyers, and covering the expenses of expert witnesses. Well-established doctors had the resources to conduct court battles, but doctors of less means might settle or abandon appeals of unfavourable trial verdicts.[6]

Doctors also complained about expenses incurred in preparing for cases that plaintiffs dropped before trial. This was a “great hardship” noted the Canadian Journal of Medical Science in 1880 in discussing a situation in which a doctor was “put to all the costs he could in procuring counsel, bringing lay and professional witnesses to the place of trial when, all at once the plaintiff, or the plaintiff’s counsel, finds he has no case, and withdraws the suit.”[7] If a jury failed to agree and a second trial took place, or if the case proceeded to the appeal courts resulting in the ordering of a new trial, expenses escalated quickly.

Physicians also had to dig into their own pockets to pay awards. Judgments ranged in size, but the threat of large awards loomed in many cases. The losing party could be ordered to pay costs, but doctors complained they were unable to receive compensation from poor patients, even if they won at trial. The Canada Lancet noted that courts refused to make patient-plaintiffs pay because typically “the party bringing the suit is financially worthless.”[8] The Canadian Practitioner meanwhile lamented that even if a physician won at trial “he may either whistle or sing psalm tunes for his costs without the slightest prospects of collecting them.”[9]

The medical profession also complained about the indirect financial harm experienced by doctors embroiled in malpractice cases. Suits risked damaging the reputations of doctors, thus harming their ability to attract and keep paying patients. Late-nineteenth-century newspapers still carried extensive coverage of local court cases, meaning that malpractice allegations received a public airing that, at best, was embarrassing, and, at worst, could drive patients to other practitioners.

The financial and reputational costs of malpractice suits led many doctors to respond ferociously to patients who made such claims. They frequently disparaged plaintiffs in colourful terms as charlatans, complainers, blackmailers, or unprincipled folk simply looking to avoid medical bills. For example, the Canadian Practitioner in 1884 complained about “every crippled pauper” with nothing to lose and everything to gain in bringing a lawsuit, even when it was against “the man who may perhaps have saved his life.”[10]

The growing concern with malpractice litigation led members of the medical profession to take several steps. Perhaps most importantly, in 1901 a small group of doctors formed what became the CMPA with a mandate to pool resources to fight lawsuits. This organization soon paid elite lawyers to represent physicians, voraciously fought legal claims on the assumption that patients were attempting to extort doctors, and lobbied for legislative changes to deter litigation. 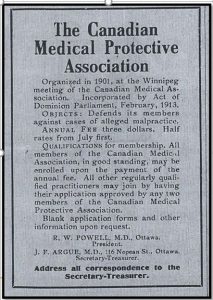 In the first half of the twentieth century, Canadian doctors proved remarkably successful in creating a national organization to defend against lawsuits and pursue changes to the common law and legislation. However, as Habiba Nosheen and Andrew Culbert have shown in their reporting for the CBC, we are still dealing with the consequences of the CMPA’s success.

R. Blake Brown (Twitter: @RBlakeBrown) is Professor of History at Saint Mary’s University and an Adjunct Professor at the Schulich School of Law.  He is one of the authors of A History of Law in Canada: Beginnings to 1866 (University of Toronto Press and the Osgoode Society for Canadian Legal History, 2018).