Today is the final day of ActiveHistory.ca’s special Theme Week on the 1919 strike wave. It is also the centenary of Bloody Saturday, 21 June 1919, the violent climax of the Winnipeg General Strike.

On that afternoon, one hundred years ago, special constables and the Royal North-West Mounted Police, backed by state officials and capitalists in the Citizens’ Committee of One Thousand, attacked strikers and their supporters during a peaceful demonstration, killing two and injuring many more. 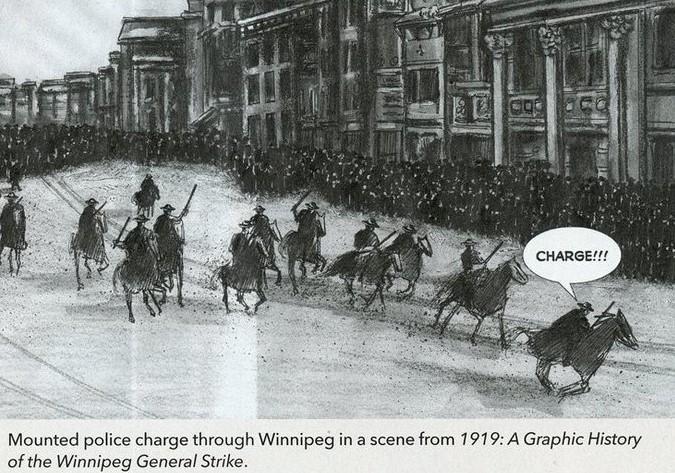 The events of Bloody Saturday are a stark reminder that to crush resistance to capitalist development and colonial expansion, the state is not afraid to bloody its hands. Indeed, less than 35 years separate the state’s attack on strikers in Winnipeg and its violent suppression of Métis, Cree, Assiniboine, and Saulteaux communities in the North-West in 1885.

To mark the centenary of Bloody Saturday, artist David Lester has produced a short film, using the dynamic illustrations he created for the Bloody Saturday sequence in 1919: A Graphic History of the Winnipeg General Strike (Between the Lines, 2019).

David also contributed an essay to 1919, explaining his process for creating the Bloody Saturday sequence.

The Art of Labour History: Notes on Drawing 1919
David Lester

It’s early morning in East Vancouver, summer of 2018. A steaming cup of coffee rests beside my drawing table. My mind is in the past. 99 years ago, in Winnipeg, to be precise. I stand, looking down at a watercolour painting on the table. In my hands I hold a toothbrush and a knife, my artistic tools of the trade. I am ready for another day of work on 1919: A Graphic History of the Winnipeg General Strike. 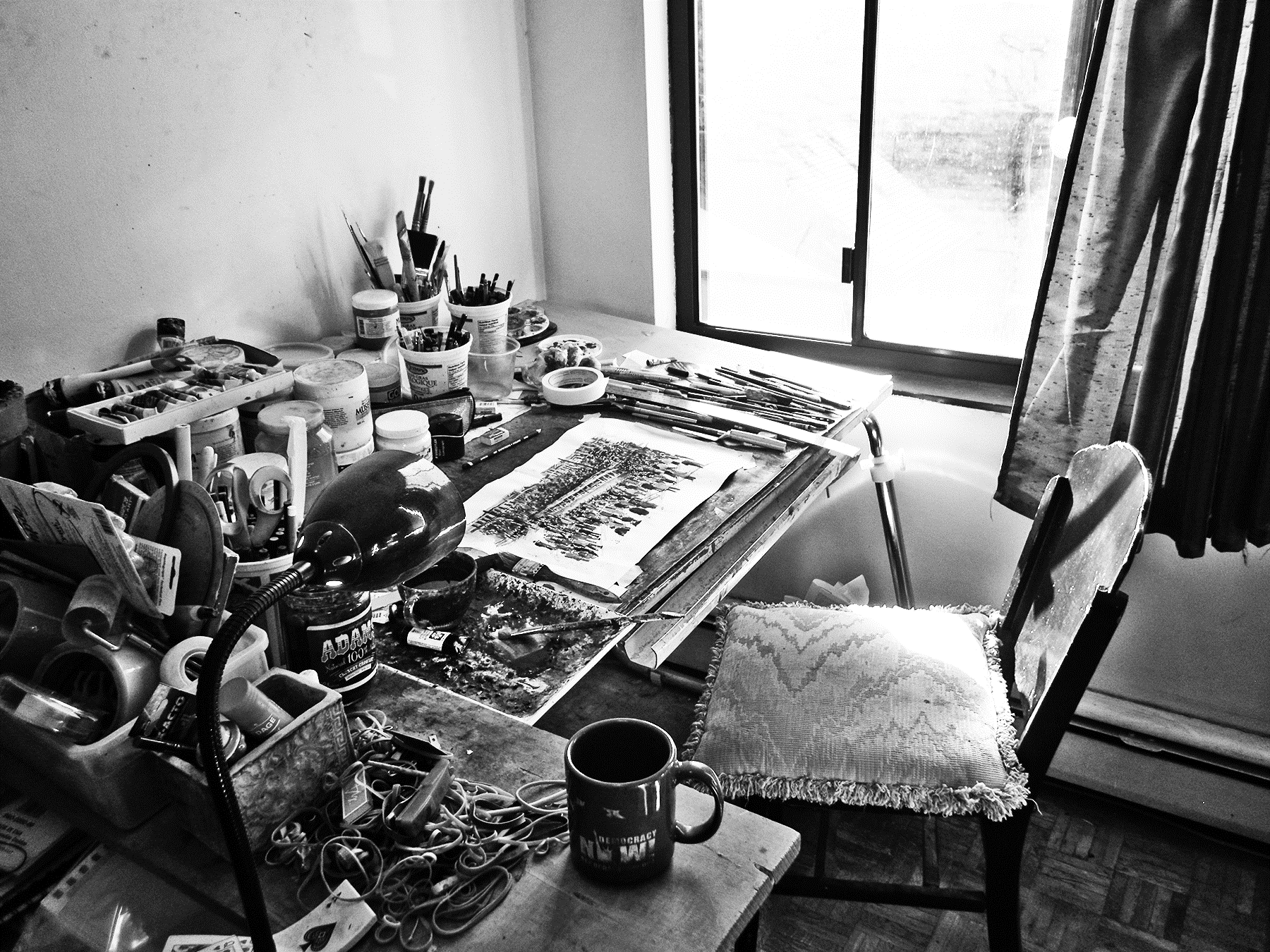 I have been illustrating 1919 on an extremely tight deadline, completing 93 pages in 53 days—about the length of the Winnipeg General Strike. I often work 10–12 hours a day. The summer has been a series of heat waves, in Vancouver as elsewhere, and my apartment is cooking at 32 degrees Celsius. The city, like much of Western Canada and the United States, is under a smoke advisory due to devastating wild fires. The world is burning, literally and figuratively. It feels like I am forging 1919 out of the fire. This intensity is playing out on the pages I am producing.

Today, I am illustrating the events of “Bloody Saturday,” 21 June 1919. In talking with members of the Graphic History Collective before starting the project, we decided to make an aesthetic connection between the violence of World War I and the brutality of class war in the streets of post-war Winnipeg, especially during the Bloody Saturday sequence. Many strikers and strike supporters, in fact, were returned soldiers and would have made a similar connection. 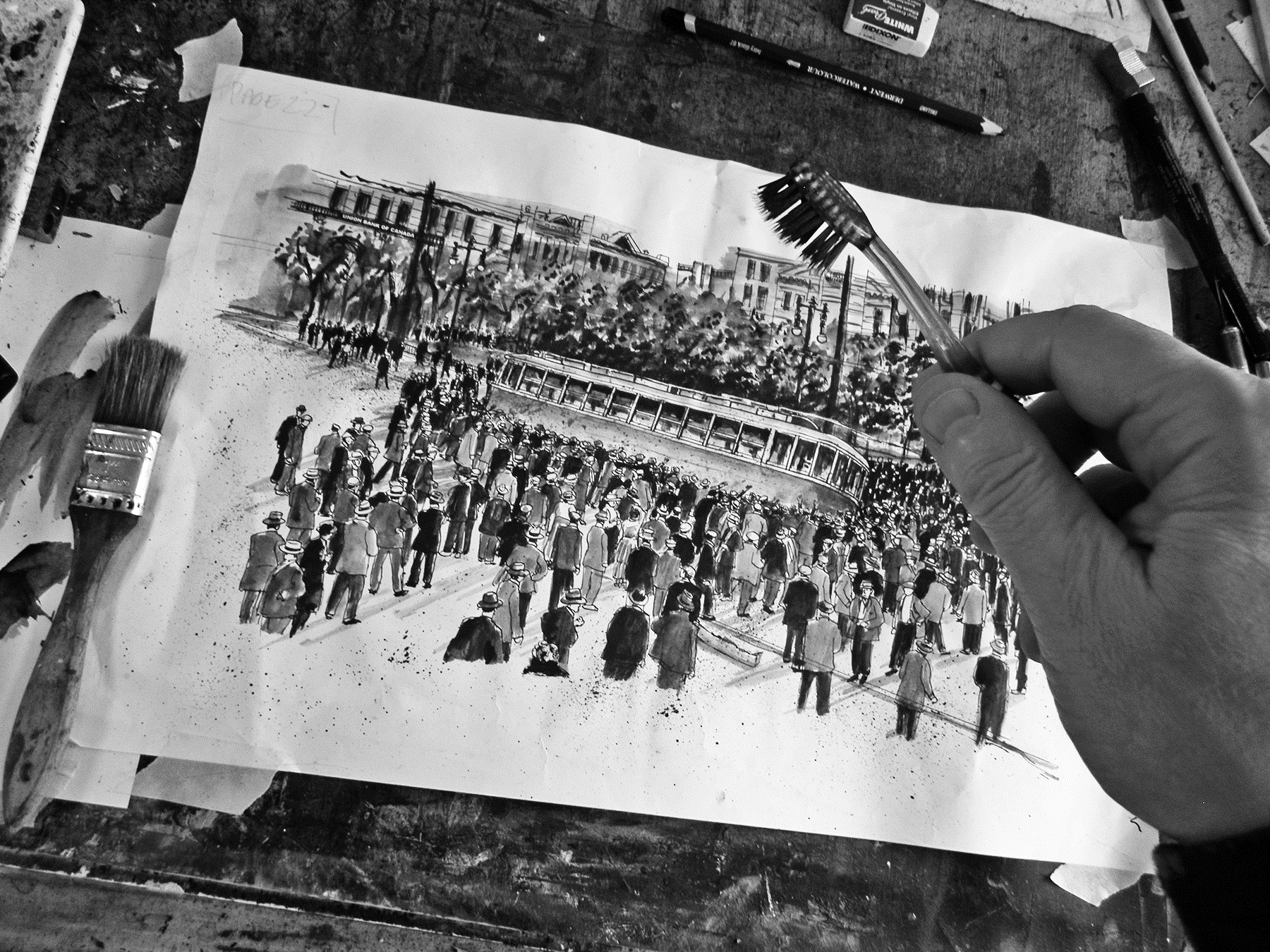 This idea, of drawing parallels between different kinds of war, has been a catalyst for me to illustrate the sequence of Bloody Saturday as if I were a war artist. I consulted the “war” art of Otto Dix and the anti-war art of George Grosz, Kathe Kollwitz, and Nancy Spero. I also looked carefully at the ultimate document of an artist bearing witness to war, Goya’s The Disasters of War. The horror depicted by these artists was not the same as that inflicted during Bloody Saturday, of course. But the parallel remains: of the state using men in uniforms to suppress the people. A truncheon is still a truncheon.

For further visual reference, in addition to the wealth of historical photographs from the Winnipeg General Strike, I drew inspiration from images of police and the military charging crowds on horseback, such as the attacks during the British miner’s strike of 1984, the civil rights marchers in Selma, Alabama in 1965, the anti-WTO Battle in Seattle in 1999, and in Montreal during an anti-police brutality demonstration in 2013. I want to convey the timelessness of conflict for justice in varying forms.

In the end, I have made over 100 raw sketches for the Bloody Saturday sequence. I did not concern myself about whether the drawings were proportional or even finished. They are meant to be in the moment. Unlike the carefully planned drawings in the bulk of 1919, these “war” drawings are frenzied and crude, and rendered as if in the panic of fleeing as the sound of horse’s hooves get closer. 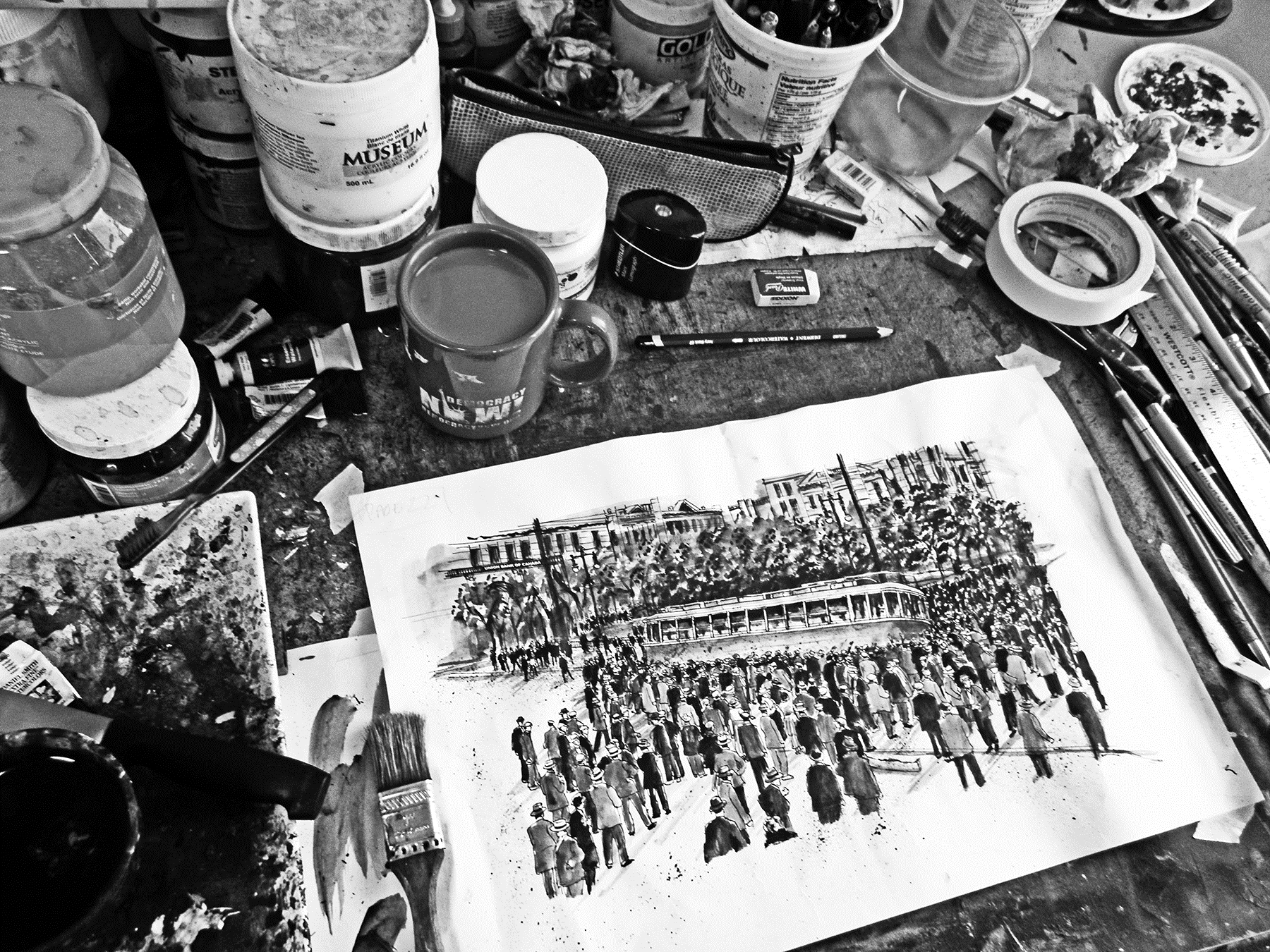 That is what I am trying to convey this morning, standing with a toothbrush and knife. I have already slathered watercolour paint on the line drawings, now I need to complete the art with the splatters of dirt, dust, screams, and blood.

The horror of Bloody Saturday is the climax of the Winnipeg General Strike, but it is not the full story, as 1919 makes clear. Nevertheless, the state’s crackdown on strikers, supported by capitalists and the Citizens’ Committee, is a reminder for workers today that society was—and still is—structured to serve the interests of capital.

Art bears witness to the injustices of the world and, in reflecting on the pain and struggles of the past, offers hope in working together for a better present and future. Art can aid the momentum of progressive social change, and that is what keeps me going this morning. I am trying to capture and convey the inspiration and spirit of solidarity in class conflict. That is the art of labour history.

David Lester is the guitarist in the underground rock duo Mecca Normal. He is the illustrator of 1919: A Graphic History of the Winnipeg General Strike (Between the Lines, 2019).

The Graphic History Collective is an activist arts collective.