100 years ago, in the spring and summer of 1919, thousands of workers across Canada went on strike to protest poor wages and working conditions and to grow workers’ power in society. In the century since, much has changed, but much remains the same.

Canada, of course, is still a capitalist settler society, complete with all of its deeply unequal features. High rates of unemployment and rising inflation, a growing gap between rich and poor, and the concentration of power in the hands of political elites and capitalists continue to define Canadian society today. These ills are compounded by increasing social inequality and climate crisis.

In our current conjuncture, as we argued in the Theme Week introduction, revisiting the 1919 strike wave and reflecting on the tactics and strategies of past labour battles does not give us a blueprint for social transformation, but it can yield important lessons for those battling to build a better world today. 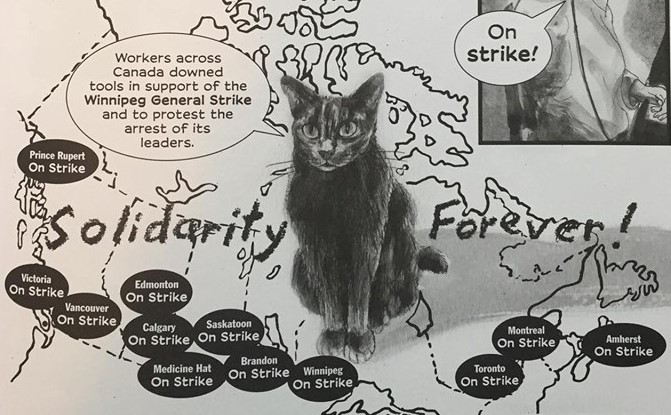 Art by David Lester, Direct Action Gets the Goods: A Graphic History of the Strike in Canada.

History is an important organizing tool. In that spirit, we offer this short conclusion and we have included a selected bibliography of further resources to learn more about the 1919 strike wave.

This Theme Week has not simply celebrated the workers’ revolt of 1919. As the posts highlight, many strikes failed—or were violently crushed—and there were a number of missed opportunities to develop wider circles of solidarity. Our goal has been to encourage critical reflection and contemplation on the strike wave in 1919 to inspire readers to think about what a strike wave in 2019 could look like.

Overall, the Theme Week was meant to revisit the workers’ revolt and showcase its national character to introduce new generations to the many lessons that working-class history holds for today. Learning those lessons—about organization and solidarity and the courage and sacrifices required to strike and challenge the capitalist status quo—can help reenergize our efforts to build a better world. Reflecting on the past can help working people today understand not only where we have been and where we are going, but also where we want to go and how we can get there together and leave no one behind.

Avery, Donald H. “The Radical Alien and the Winnipeg General Strike of 1919.” In The West and the Nation: Essays in Honour of W.L. Morton, edited by Carl Berger and Ramsay Cook, 209–31. Toronto: McClelland and Stewart, 1976.

Bernard, Elaine. “Last Back: Folklore and the Telephone Operators in the 1919 Vancouver General Strike.” In Not Just Pin Money: Selected Essays on the History of Women’s Work in British Columbia, edited by Barbara K. Latham and Roberta J. Pazdo, 297–313. Victoria, BC: Camosun College, 1984.

Campbell, Peter. “Understanding the Dictatorship of the Proletariat: The Canadian Left and the Moment of Socialist Possibility in 1919.” Labour/Le Travail 64 (Fall 2009): 51–73.

Kramer, Reinhold, and Tom Mitchell. When the State Trembled: How A.J. Andrews and the Citizens’ Committee Broke the Winnipeg General Strike. Toronto: University of Toronto Press, 2010.

Mitchell, Tom. “‘To Reach the Leadership of this Revolutionary Movement’: A.J. Andrews, the Canadian State and the Suppression of the Winnipeg General Strike.” Prairie Forum 18, no. 2 (Fall 1993): 239–55.

The Winnipeg Defence Committee. Winnipeg 1919: The Strikers’ Own History of the General Strike, edited by Norman Penner, introduction by Christo Aivalis. Toronto: Lorimer, 2019.