Tumult was everywhere in 1919. In an autobiographical work published in 1966, Kingsley Martin, British journalist and long-time editor of The New Statesman, recalled that “the only time in my life when revolution in Britain seemed likely was in 1919.”  It is true that in Canada an influential current of labour radicalism celebrated the Russian revolution and called for the end of capitalist rule. In Winnipeg, during the famous (for some infamous) meeting at the Walker Theatre on 22 December 1918 – R.B. Russell among others on the stage – motions celebrating solidarity with the most radical currents of European Marxism were approved with unanimity. Labour radicalism had its advocates in Winnipeg and across western Canada, but when members of Winnipeg’s organized labour movement elected a new President to lead the Winnipeg Trades and Labour Council in 1919, they chose labourite James Winning over R.B. Russell. And it was Winning, not Russell, who led Winnipeg workers into the general strike.

Perhaps not surprisingly, when the Winnipeg General Strike came, its opponents organized as the Citizens’ Committee of One Thousand ignored the real causes of the strike and cast the walkout as a version of Bolshevism. In the centennial year of the strike, variations of the Citizens’ anti-labour polemic deployed to effect in 1919 have appeared. The most recent is an op ed by Jenny Motkaluk of the Frontier Center for Public Policy, “Let’s Not Romanticize the 1919 Winnipeg General Strike,” which was published in the National Post 26 June 2019. Motkaluk’s narrative echoes various (false) Citizen refrains: the Strike Committee “sought to usurp the authority of the government,” the strike was directed against the “British Constitution with its liberties and democracy,” the strikers were demanding a “dictatorship.” These claims made by the Citizens in 1919 and by Motkaluk in 2019 were and are pure polemic designed to distract attention from the real economic and social injustice in which the strike was rooted. 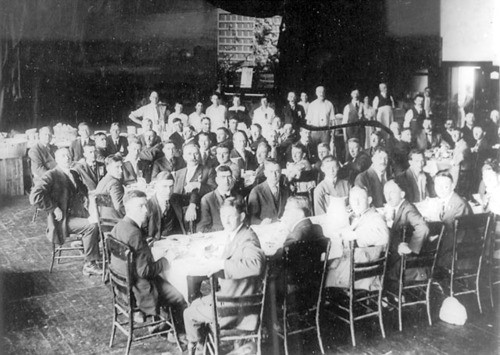 In the summer of 1919, in front of H.A. Robson’s  Royal Commission inquiry into the origins of the strike, James Winning explained that “Never before in his life had he found it so easy to take a strike vote. Every man seemed to have his own particular grievance.” He pointed to the high cost of living, wartime profiteering, the refusal by employers to recognize collective bargaining, poor working-conditions, and the threat of unemployment as sources of working-class anger and desperation. He recalled that Manitoba’s Minimum Wage Board had determined that a single woman had to receive a minimum of $12.00 per week to acquire “the bare necessities of life.” Winning had investigated wage levels across the city, and found that men with families to support were being paid $12, $15, and $18 per week.

Strikes of individual unions offered no solution to low wages in “Injunction City,” a sobriquet earned for Winnipeg by the harshness of its employing classes and their lawyers. Legal protection of picketing had been eliminated under the Canadian Criminal Code in 1892. With no legal right to peaceful picketing on the books, Winnipeg employers used injunctions to ban strikers from gathering anywhere near work sites. And in 1901, after the famous Taff Vale Railway decision in which British Law Lords ruled that firms losing money in a strike could sue unions for damages, Winnipeg employers did just that if a strike was threatened or called. Meat-cutters striking in 1917 were confronted with damage suits for $25,000 and perpetual injunctions against picketing. Ditto machinists at Vulcan Iron Works in the same year. At Woolworth’s, a similar $25,000 suit was slapped against striking female clerks who made $6 a week (at a time when room and board alone cost that). The judge imposing the injunction criticized the company for its heavy-handed suit, but imposed the injunction against picketing. The company refused to recognize the union and replaced the women.

Confronted with a general strike that could not be tamed with injunctions, the Winnipeg business community refashioned the anti-labour Winnipeg Citizens’ Alliance formed in 1918 modeled on the Minneapolis Citizens’ Alliance–an organization that deployed injunctions, labour spies, citizen arrests and prosecutions against labour–into the Citizens’ Committee of One Thousand and undertook a no-holds barred campaign to defeat the strike at all costs. The Citizens took steps to forestall any negotiated settlement of the strike, demonized central and eastern European immigrants, and, enabled by the federal department of justice, carried out vigilante arrests and criminal prosecutions of individuals selected by the Citizens as “strike leaders.” A detailed, documented account of the Citizens’ illiberal, race-based, and sometimes illegal campaign against labour in 1919 has been in the public sphere since 2010 in the pages of When the State Trembled: How A.J. Andrews and the Citizens’ Committee Broke the Winnipeg General Strike.

Anyone with a functioning moral compass might pause before dismissing the strike of 35,000 people as the product of a conspiracy–Bolshevik or otherwise. Even now, Motkaluk might take the opportunity to read Hugh Robson’s report in which he draws attention to the daily challenges of working-class life, to the terror of unemployment, and to the misery of poverty. Robson’s social commentary presents a scathing rebuke to Winnipeg’s status quo. “The grievance of class distinction” was, Robson observed, “deeply rooted” in Winnipeg’s social order. Working-class Winnipeg resented the fact that “self-indulgent” members of the “manufacturers and the merchandising class” prospered while labour suffered. Prosperous Winnipeg “never seems to be in want, neither in the matter of food, clothing, suitable residence, education, medical and other professional attention, or even recreation…  labour [was] not only never assured but [was] very often deprived of the essentials of these things.” In Robson’s view, Winnipeg in 1919 provided an unfortunate example of the ills wrought by economic and social inequality. “There has been and there is now,” he observed, “an increasing display of carefree, idle luxury and extravagance on the one hand, while on the other is intensified deprivation. The generally cold indifference of the one section to the condition of the other and the display of luxury aggravate this feeling of social disparity into one of active antagonism by the one class against the other.” Robson’s words provide a powerful antidote against those like Motkaluk who would romanticize the opponents of the Winnipeg General Strike.