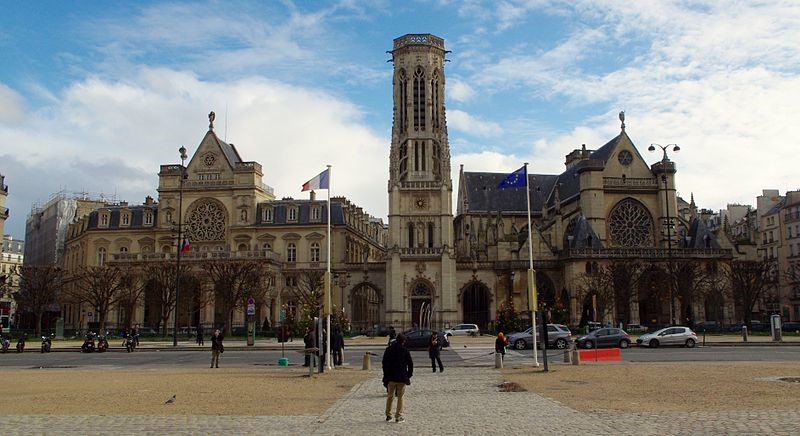 In 2006 Leonard Pitt observed in his guidebook Walks Through Lost Paris that “one would have no idea that this was the spot where Saint Bartholomew’s Day massacre was launched.”[1] The spot to which he referred, pictured above, is Paris’s l’Eglise Saint-Germain-l’Auxerrois, a gothic cathedral that has become a well known “dark tourist” destination for its role in the 1572 massacre. While “dark tourism” is a fairly recent term (coined in 1996 by Malcolm Foley and J. John Lennon), it is not a new concept.[2] The Catacombs of Paris, for instance, have been open to the public since 1809, and Pompeii has attracted European visitors since the mid-18th century.[3] However, guidebooks only began mentioning the darker side of Saint-Germain-l’Auxerrois’s history in the mid-19th century. By considering how guidebooks from different eras describe this church, I explore how historical memory of the site was tied to Paris’s changing urban landscape and suggest that references to the 1572 massacre in tourist literature only emerged as religious tensions in France diminished.

Saint-Germain-l’Auxerrois is situated in the heart of Paris. Taking a left off the Pont Neuf onto the right bank, the church is just a few blocks away. Turn right onto Place de l’École, then left onto Rue des Prêtres Saint-Germain-l’Auxerrois, and right again onto Place du Louvre. A few steps forward will bring you face to face with one of Paris’s most interesting historic sites (for historians of religion, at least). Looking between the buildings on either side of the ornate bell tower that is now situated between the Mairie for the 1er Arrondissement and the church, subtle signs indicate that the building to the right is much older. To truly appreciate the differences between the structures, pass through the gates into the courtyard where you can see that the church is adorned with gargoyles and flying buttresses—testaments to the building’s age.

From this vantage point, the original bell tower is visible. Most of the tower’s visitors these days are the staff who park their cars here, or the workers going about their tasks at the Mairie’s loading dock. A full view of the old bell tower is obscured by tree branches, and the tight quarters force you to tilt your head backwards to see the top. However, for this historian, this quiet spot in the courtyard is the most important part of the building. 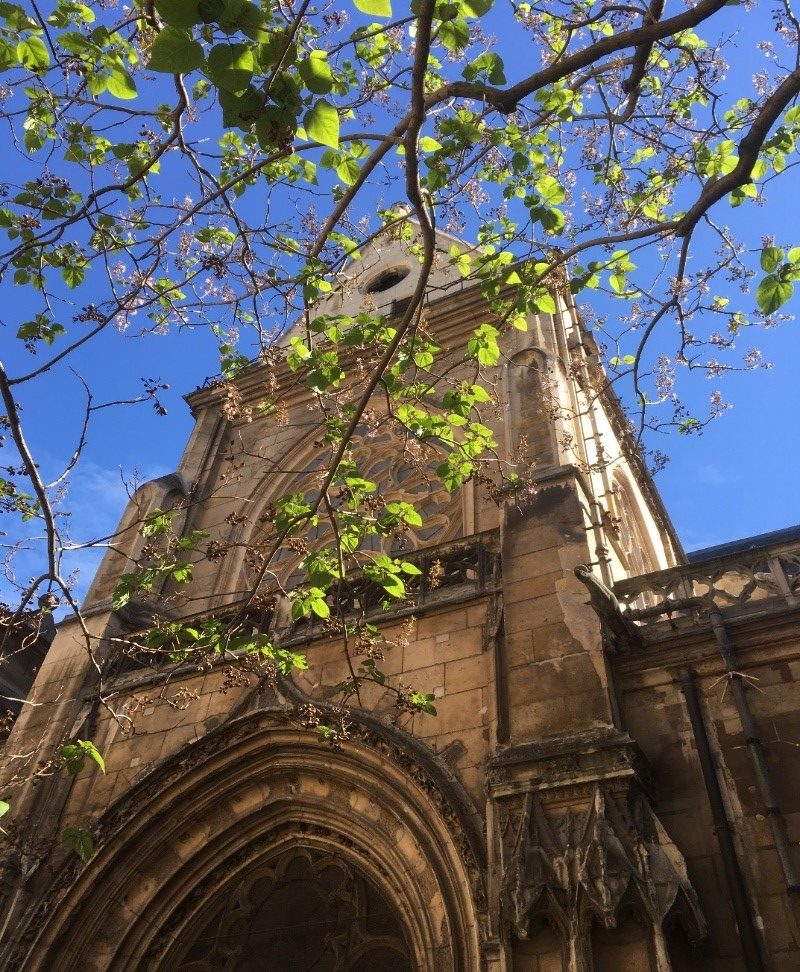 This bell tower was ground zero for one of history’s most infamous massacres, the Saint Bartholomew’s Day Massacre of 24 August 1572—an historic “red wedding” that would become a defining moment in the then raging French Wars of Religion (1562-1598). The French Wars of Religion consisted of eight civil wars fought between Protestant Calvinist Reformers and Roman Catholics. In 1572, the royal marriage between the Protestant Henry of Navarre and Catholic Margaret of Valois was meant to symbolize a coming together of the opposing religious sects. However, Catholics used the opportunity to descend upon and murder the thousands of Protestants congregated in Paris to celebrate the marriage. The signal used to commence this grisly event was the bell toll from Saint-Germain-l’Auxerrois.

The church’s role in this massacre draws visitors from around the world these days, but in former centuries, its dark history was not marketed to tourists. In contrast to modern guidebooks or travel blogs that use the allure of tragedy to draw visitors to this site, guidebooks produced prior to the 19th century focused on the building’s physical attributes or its functions as a place of worship. Failure to confront this topic in guidebooks represents a hesitance to engage in the political discourses surrounding religion in the 17th and 18th centuries. In contrast, the emergence of references to the massacre in these texts in the 19th century represents a religious settlement in France, and within the Church at large.

City guidebooks became a formal genre in the 17th century and many tourists began using them to find tips and information about the places they visited.[4] Germain Brice’s A New Description of Paris (1687) was a groundbreaking text, the first of its kind produced outside of Rome, and would become the template for similar guidebooks that were published in later years.[5] His short description of Saint-Germain-l’Auxerrois spans three pages and discusses details like the foundation of the parish and the ornamentation therein. Brice’s guidebook, like similar texts produced in the following century, ignored the church’s association with the 1572 massacre entirely. In fact, most 18th-century guidebooks ignored the church altogether. There was a lull in the production of new English guides to Paris in the 18th century, but Abbé Antonini’s A New View of Paris (1749) is one surviving example. Antonini’s book does not mention Saint-Germain-l’Auxerrois at all.

Despite this former neglect, something changed the following century. In the 1867 edition of John Anthony and William Galignani’s popular Paris Guides, the massacre gets a passing reference:

It was from its [Saint-Germain-l’Auxerrois’s] belfry that the fatal signal was given and responded from the Palais (now de Justice) for the commencement of the massacre on the eve of the Fête of St. Barthelemi, 23d August 1572; the bells of this church tolled during the whole of that dreadful night.[6]

But why did it take until the 19th century for references to the massacre to become common in guidebooks? Beyond changes in the genre itself between the 17th and 19th centuries, changes to the physical space and cultural relationship to the structure importantly influenced how it was represented in these texts. The Haussmanisation (the rebuilding of Paris) occurred between 1857 and 1859, a decade before the Galignani’s 1867 guidebook. During this time the new bell tower and symmetrical building were erected to the left of the original bell tower. 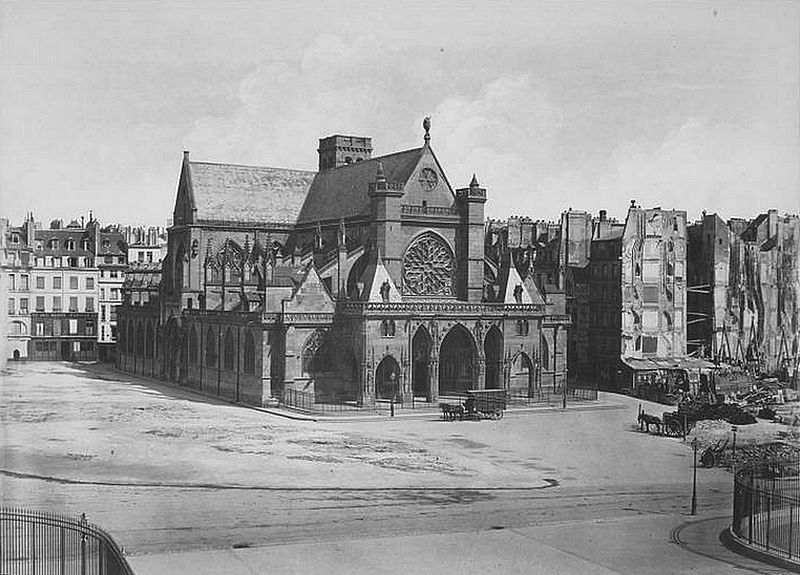 The church in 1858, prior to the construction of the new bell tower and Mairie. The original bell tower is completely visible from the street. Wikimedia Commons.

The choice to hide the original bell tower from view was intentional and important. Some say that Georges-Eugène Haussmann, the man behind Paris’s urban renewal, refused to raze the original structure because it would upset French Protestants or because he himself was Protestant.[8] So, instead of destroying the church, Haussmann hid the original bell tower. The centralization of the new tower draws the viewer’s eye to it. The newer additions are done in the same gothic style as the original building, which suggests that these structures are meant to blend in with the original church. It appears that Haussmann meant to cover over the history of the church by putting emphasis on the new bell tower—he replaced a symbol of religious persecution with a new tower that literally overshadows it, perhaps also intended as a subtle symbol of peace between Catholics and Calvinists.

Saint-Germain-l’Auxerrois’s representation in guidebook literature symbolizes a progression of stages in how France approached memory of the Wars of Religion. At first the connection between the Saint Bartholomew’s Day Massacre and the church was not discussed in guidebooks. In the wake of the Wars of Religion, there was a desire to cover up and create distance from the bloody history of Saint-Germain-l’Auxerrois. A veil was pulled over the topic: ignorance, though not acceptance, allowed for an allusion of peace between the French Protest and Catholic denominations. In the period of the Third Republic, Haussmann renovated the church as a means to change perception of the building. Despite his efforts to mask it, the church’s dark past has become its central attraction, an indication that tensions between Christian denominations gradually became less charged and thereby more openly discussed. In this modern age of secularism and ecumenism (or reconciliation between Protestant and Catholic denominations), far from a period where the violence of the Wars of Religion effected the lives of French citizens, the topic has become a source of fascination for modern tourists. These shifts are evident in the manner that the church is represented in guidebooks through the past four centuries.

Erin Isaac is a Master’s student in history at the University of New Brunswick. Her thesis Conflicting Christianities: Anglo-North American Anti-Catholicism and Its Exceptions, 1763-1780 considers the legacy of imperial anti-Catholic traditions as expressed during the Seven Years’ War (1754-63) among British North Americans and its effects on politics and culture between the Quebec Act (1774) and the Franco-American alliance (1778).