Brotherhood opens for a week-long engagement at the Cineplex Yonge & Dundas in Toronto starting December 6. It will also be shown at the Sudbury Indie Cinema on December 13. 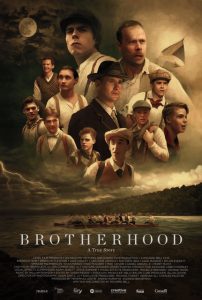 In the summer of 1926, a group of young men were attending a camp along the shores of Balsam Lake in Ontario. Part of the Brotherhood of St. Andrew leadership group out of Toronto’s St. James Cathedral, they had come to the lake for two weeks outside their daily lives in the city. Led by First World War veterans, the experience turned into a nightmare when they were caught on the lake in the midst of a major storm. What followed was a struggle for survival.

That real-world story is the subject of Brotherhood, a new historical drama written and directed by Richard Bell. In telling the story of the young men, both that lived and died during that fateful trip, Bell explores issues that not only shaped their lives, but also continue to influence life in the 21st century. From the impact of war to questions about masculinity to navigating adolescence, the film explores questions that, 100 years later, still confront young people as they transition to adulthood. Beautifully shot in northern Ontario, Brotherhood both tells a fascinating and captivating story in a visually striking manner.

In this episode of the History Slam, I talk with Richard Bell about the movie. We talk about his research into the story, masculinity in 2019, and the First World War’s role in the story. We also talk about the challenges of shooting on location, taking artistic liberty with historical events, and writing dialogue for real people who left no record.

Sean Graham is a historian with Parks Canada, an Adjunct Professor at Carleton University, and a contributing editor at Active History.