At the corner of Old Barrie Road West and Line 3 in the Township of Oro-Medonte, Ontario, Canada sits the Oro African Methodist Episcopal Church (OAMEC). Now open for tourists, special ceremonies, and celebrations, the church was originally built in 1849. Along with the plot of land on which it sits, it is a designated national historic site.

The site is surrounded mostly by farmland. But where there is a church, there is (or was) community. And with community comes history.

This community, originally named the Oro Wilberforce Settlement, was established in 1819 by racialized Black[1] former soldiers who fought for Britain in the War of 1812 with the promise of land in return for military service. The church, and the plaques and monuments around the church property, are the only commemorative markers of the former Oro Wilberforce Settlement. It was once comprised of approximately 60 homes and properties belonging to racialized Black individuals and families. 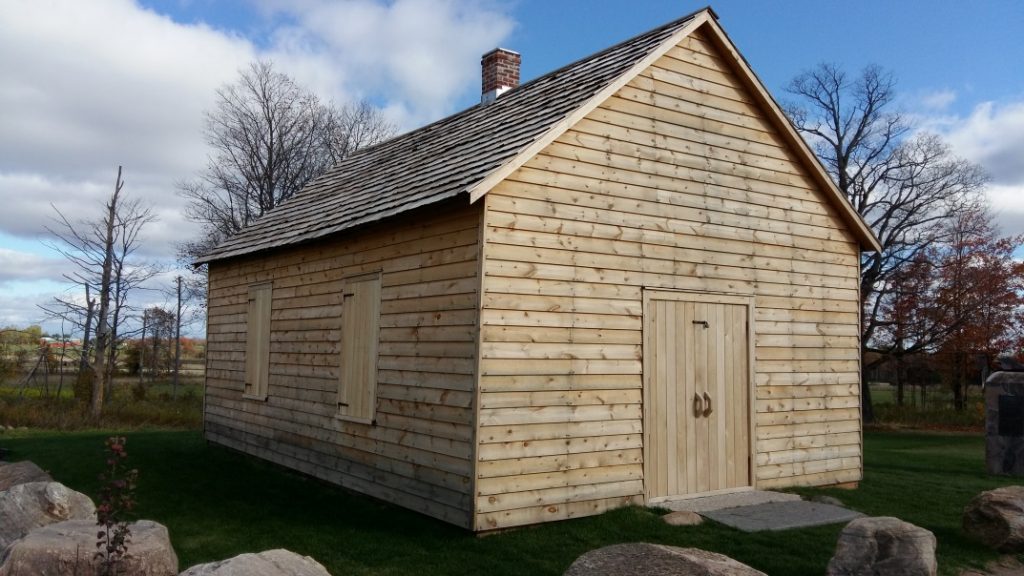 The brief narrative presented above is not simply a retelling of a history inscribed upon a single plaque. Rather, it is pieced together using various descriptions from numerous plaques that have been erected on the site since the late 1940s. Instead of removing an old plaque and replacing it with a new one, old markers have been left standing while new ones have been placed alongside them.

The oldest marker is a concrete monument unveiled in 1947; the most recent is a plaque put in place in 2015. Each plaque and marker tells a part of the community’s story. They add or omit details and use different terminology for the racialized Black inhabitants of this place. No two plaques have been put in place by the same government committee or sponsoring organization. So, while plaque designers may have examined the already-present plaques to take note of what information was already presented, none of the plaques read as if they continue a narrative that was started by a previously-placed plaque. Instead, more recent plaques attempt to update the language of the same story already told.

The occurrence of a new plaque being put in place while the older plaques are not removed is rare. Can this observable timeline of commemoration develop an historical narrative of this community?

The monument from 1947 was presented by Simcoe County and the Township of Oro (now Oro-Medonte). It makes no mention of ‘race’ and simply lists 24 family names of those known to be buried at the site. This “colour-blind” commemoration leaves open possibilities for monument readers to imagine the people as equal pieces in the ongoing assemblage of a national puzzle. On the other hand, by not acknowledging their racializations, the monument disregards significant elements that position the people and community within particular historical contexts. This monument only establishes one foundational point: we can identify the people who were there, and their stories can be told. 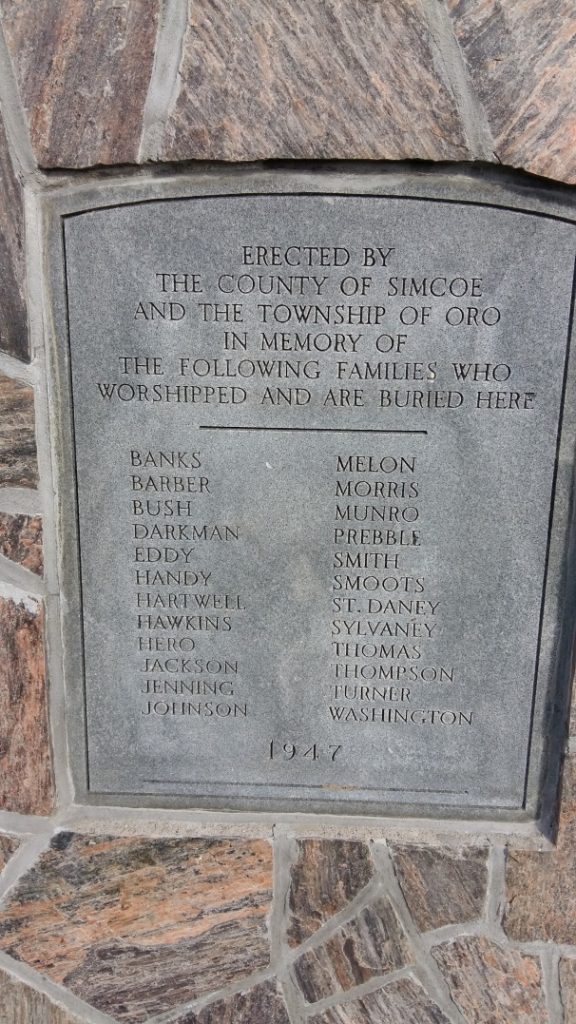 The next plaque is not dated, but it is chronologically next because it was produced by the Simcoe County Tourist and Industrial Committee—a committee that no longer exists and whose most recent available records are from the 1950s. The plaque reads, “Between 1830 and 1850 some 24 Negro Families who had fled from slavery in the United States to freedom in Canada” created homes in the community.

Simcoe County was named for Lieutenant-Governor John Graves Simcoe, who, in 1793, introduced the Act to Limit Slavery in Upper Canada. This act allegedly intended to gradually abolish slavery in what became Ontario. There is no mention on this or any of the plaques, however, of the 1793 act or of slavery in Canada being legal until the introduction of the Slavery Abolition Act, which was passed by the ruling British Parliament in 1833 and put into force in August 1834 throughout all of the British Colonies. On this plaque, slavery remains an American institution while Canada is presented only as an historical safe haven for Freedom Seekers. 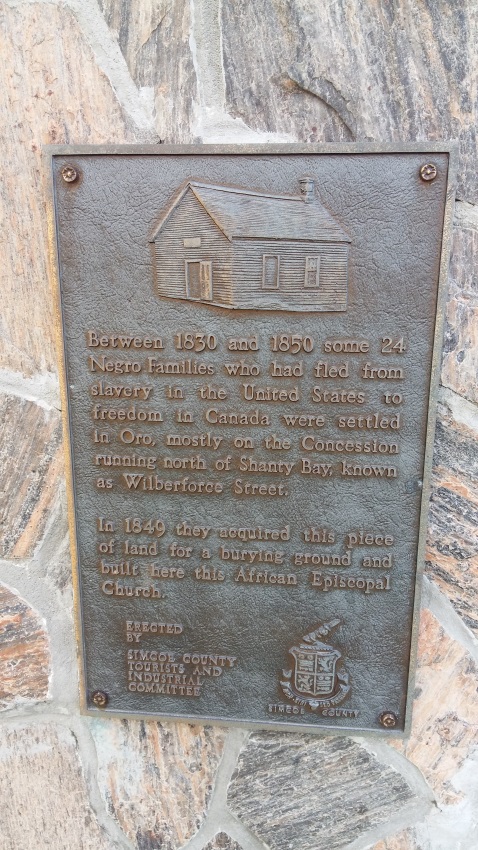 The 1999 plaque acknowledging the 150th anniversary of the building of the OAMEC refers to the “Black Pioneers who settled in this area.” It states that the community founders were “soldiers of Capt. Runchey’s ‘Company of Coloured Men’ who fought the Americans in the War of 1812” and adds, “The next wave of settlers were ‘freemen’ from the Northern U.S.” Here, the inclusion of slavery is only insinuated through the use of “freemen.” Labeling them as ‘pioneers’ who fought for Britain and as ‘settlers’ tells a story of people committed to developing a nation which they were welcome to join and to which they could contribute. These terms perpetuate a terra nullius view of a landscape to be conquered, ignoring the colonialism that disrupted and displaced Indigenous communities. Additionally, ‘pioneers’ and ‘settlers’ place these racialized Black people in positions of historical equality, which was not the case. The facts that the community’s original inhabitants had to petition the (then British) government for the land promised to veterans, and that it took five years after the war’s end for these former soldiers to finally receive their land compensation, is effectively swept under the grand nationalist rug. 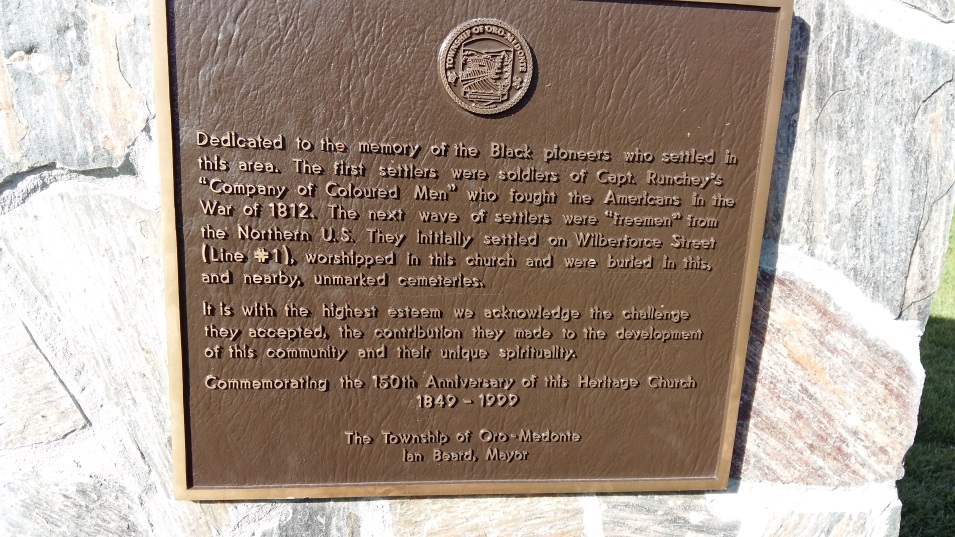 1999 plaque marking the 150th anniversary of the OAMEC. Photo taken by author. 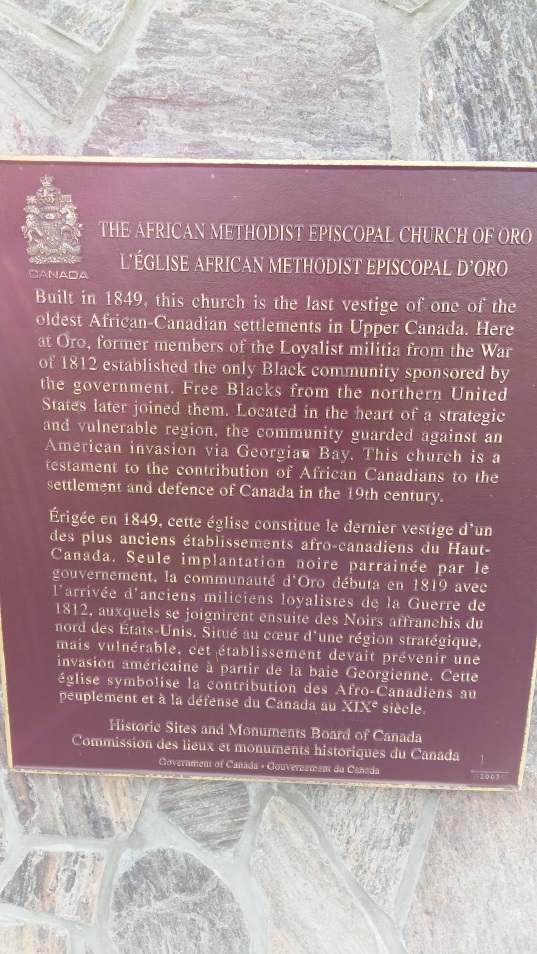 2002 plaque donated by the Historic Sites and Monuments Board of Canada. Photo taken by author.

Yet another plaque from 2015 is a belated marker for the bicentennial anniversary of the War of 1812, and is presented as a tribute to the racialized Black soldiers who fought for the British in the war. On the plaque is a declaration that, “All Canadians are indebted to those veterans.” Framing these soldiers in such national terms pushes a narrative of patriotism and national unity at a time when Canada was not yet a country. The racialized Black soldiers’ reasons for military service may or may not have been for any national or political allegiance to Britain or even to the land that became Canada. Nonetheless, this plaque also identifies those who first established the Oro Wilberforce Settlement as “Black Settlers” and “Black Pioneers.”

The developing label of the settlement as a Black community and of the people as Black Pioneers is vaguely but intentionally defined on the 2015 plaque. Stated on the plaque is that “Settlers” and “Pioneers,” with all the colonial connotations to these terms that I discussed earlier, were the people who “struggled in this area for survival, without roads or government assistance, so as to carve out of the wilderness a harsh and challenging life [but nonetheless a] life of freedom and racial equality at a time when Black slavery was considered ‘legal and necessary’.” By stating that slavery was legal when the community was established, this plaque comes closest out of them all to acknowledging slavery in Canada. But the plaque does not clarify that, in 1819, slavery was legal in Canada as well as the United States. When read in relation to the other plaques, this plaque continues to emphasize the dangers faced by racialized Black people south of the Canadian border, but not in Canada itself. 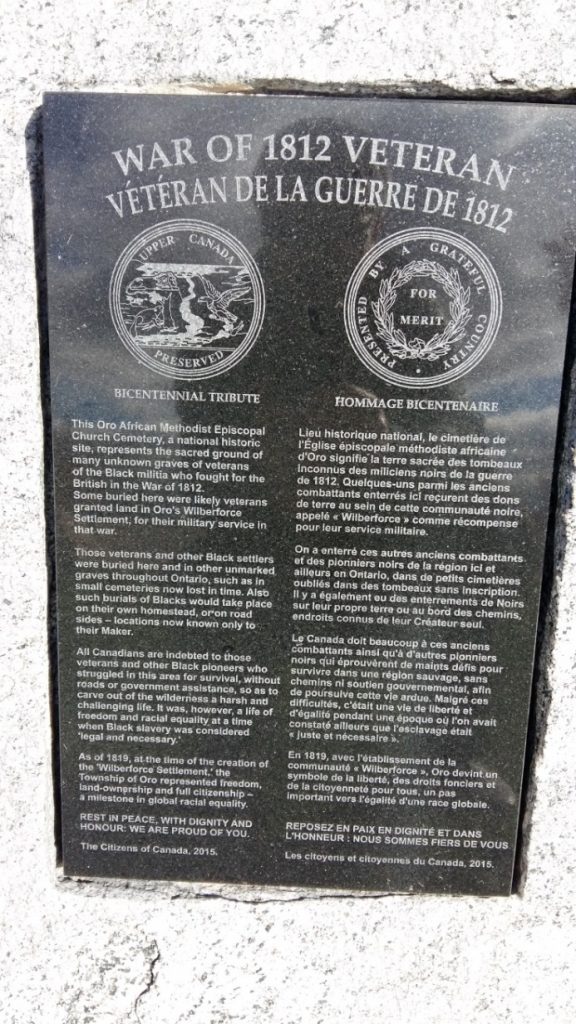 2015 plaque commemorating the bicentennial anniversary of the War of 1812. Photo taken by author.

While these markers together may portray an evolution of efforts to recognize and engage histories of racialized Black people and communities in Canada’s history—histories that indeed need to be told—these histories become couched in colonial narratives that reify the authority of a colonial government[2]. The changes over time shown through the markers indicate increasing space devoted to the telling of previously-silenced histories, but the space formed is such that racialized Black bodies must be qualified before being permitted to “fit” into dominant historical narratives. Increasingly, the markers reveal a historicity that shapes the inclusion of Black bodies in ways that adhere to a grand nationalist collective memory, placing the racialized Black people and community as contributors to nation-building, yes, but as secondary arrivals to an already-established country. With each added plaque, the lesson increasingly taught to site visitors has been one of racialized Black people patriotically joining what would become Canada and being varyingly positioned to do so by a benevolent government that showed a growing commitment to equality.

Mark T. S. Currie is a PhD Candidate and Teacher Educator in the Faculty of Education at the University of Ottawa. He focuses his research around public pedagogies, sociohistorical spaces, and enacting antiracisms.

[1] “Racialized Black” acknowledges the social construction of categories of ‘race’ as a process, ascribing and subscribing to identities that have historically been (re)created using different terms (e.g. Negro, Coloured, African-Canadian, Black). The former soldiers mentioned above are referred to using these various terms to identify them in terms of ‘race’. Each term highlights how these people were and are seen, rather than how they identified themselves.