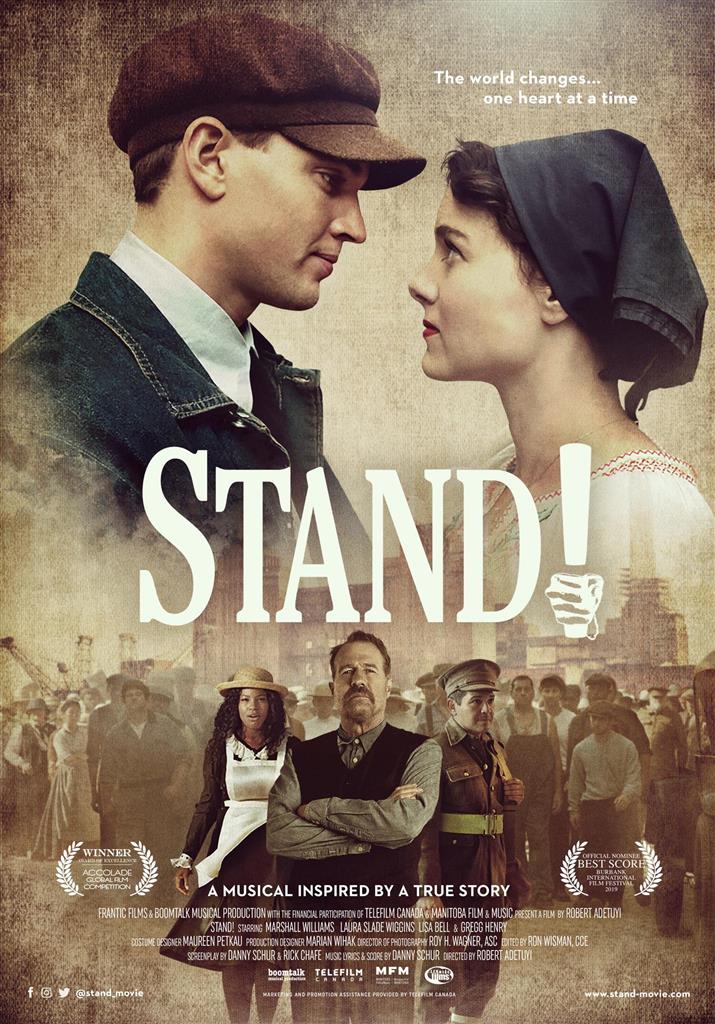 The catalogue of labour history films in Canada is a small one. There is a very good body of work in the documentary tradition, but you will not need a long weekend to screen all of the dramatic films related to this country’s labour and working-class history.[1] To this shelf, we can now add a new film based on the 1919 Winnipeg General Strike, arguably one of the best known events in Canadian labour history.[2]

Stand! is a film adaptation of the stage musical Strike! which was written by Winnipeg-based Danny Schur and Rick Chafe, especially Schur, who was responsible for the music, lyrics, and score. The musical was produced in 2005 and has played on summer stages in Winnipeg repeatedly since then. As the centennial year of the strike approached, Schur took up the idea of making a film adaptation. The producers were able to raise a $7 million budget, a substantial sum for any Canadian film. There was support from agencies such as Telefilm Canada and Manitoba Film and Music as well as from the Canadian Labour Congress and other unions. Shooting was completed in Winnipeg in 2018, under the direction of the Hollywood-based Canadian director Robert Adetuyi and the American cinematographer Roy Wagner.

The subject matter, of course, is well-known, or should be. For six weeks in the spring of 1919 one of Canada’s major cities was caught up in a general strike that attracted support from more than 30,000 workers. Most of the leadership were skilled workers from Britain who were seeking union rights and social reforms, but most strike supporters were not union members at all at the time. Many were hopeful immigrants from Eastern Europe; others were veterans returning from the horrors of the Great War. In the short run, the strike met resistance from the local establishment and the federal government, and the repression produced arrests, bloodshed, and defeat. In the long run, however, the strike entered history as a mythic event that contributed to the growth of union organization and labour political action.

How does the film present historical information and ideas? Keep in mind that Stand! is what historian Robert Rosenstone calls a “mainstream historical film.” By this we mean that it is a work of dramatic fiction, not a documentary or an experimental film. As Rosenstone points out, mainstream films follow an often unarticulated code of “cinematic realism” in constructing a plausible past. Stand! is certainly informed by the substantial research that exists on the strike, and this provides the context for the human drama at the centre of the film. Meanwhile, the film utilizes the devices of “simplification” and “true invention” to fictionalize details and highlight issues. Moreover, the film deploys the additional instrument of musicality as part of its language.[3]

This kind of mainstream drama insists on telling a story of individuals, and in this case we have two young immigrants, the Jewish activist Rebecca Almazoff (Laura Slade Wiggins) and the Ukrainian worker Stefan Sokolowski (Marshall Williams). These are invented characters, created in order to tell a story that revolves around their respective family sagas, their romance, and their relationship to the strike. Rebecca’s brother Moishe (Tristan Carlucci) and Stefan’s father Mike (Gregg Henry) are actual historical figures, but we have relatively little factual information about them, and the filmmakers engage in inventions that create a suspenseful plot and add to the emotional impact of the story.

Other historical individuals, such as the feminist organizer Helen Armstrong (Hayley Sales) and the establishment lawyer A.J. Anderson [name slightly altered] (Paul Essiembre) signify the major forces in opposition to each other, the Strike Committee and the Citizens’ Committee. While some returned soldiers stir up trouble for immigrant workers, a Métis veteran (Gabriel Daniels) recognizes that the war has given him hopes that he refuses to abandon. Under the rule of character compression, whereby several themes may be represented by a single person, Senator Gideon Robertson (Blake Taylor) has the heaviest load, as the Minister of Labour is pressed into service to represent both local, provincial and federal arms of the state.

The film resists the documentary impulse to use period photographs, but it gives us the look of the past in the material world of workplaces and neighbourhoods. Some scenes are shot in identifiable locations that add to the authenticity effect, and the muddy streets and crowded rooming houses of immigrant Winnipeg contrast sharply with the clubs and mansions that seem to belong to a separate world within the single city. Like the design of settings, the dress of the characters also conveys social standing in recognizable ways.

At the same time, this is a musical, a form that demands theatrical departures from realism as the characters turn to soliloquies or choruses to raise the emotional stakes. One impressive number features contrapuntal choruses, one male and one female, as they dream of higher wages – with a gendered gap in expectations that makes its point with subtlety. In another notable musical scene, the African-Canadian maid Emma (Lisa Bell) addresses a protest rap to the camera while her master and mistress sit frozen and unaware at their dining room table. Others will appreciate watching the head of the Citizens’ Committee pound out anti-strike propaganda on his typewriter or listening to Armstrong lead an anthem of protest into the den of the enemy.

The most important question Rosenstone asks about historical films is whether a film engages with the historical discourse. Does it simply adopt an historical landscape and ignore what is known of the history of the times, making it little more than a costume drama? Or does it try to reconstruct, in cinematic ways and with its own insights, the kinds of issues that concern historians? A film cannot engage all aspects of the historical discourse, but Stand! meets Rosenstone’s standard. We see the divisions between ethnicities, genders, and generations play out before our eyes, and we also watch the ideals of solidarity come to life in successive moments of illumination. At the same time, we bear witness to plenty of evidence of the ways the local establishment performs its mission of pulling strings, dividing the working class, and representing its own privilege as a defence of the public interest.

Stand! shows the strike as an urban rebellion by immigrants who expect a greater measure of fairness and equality within Canadian society at the end of the Great War. They want good wages and fair conditions, and they fear discrimination and deportation. The original collective bargaining dispute that precipitated the general strike is far from the centre of the story; nor are the radicals and revolutionaries of the time important to the action. But when we learn about the arrest of the strike leaders, we walk in the protest march that culminates in the events of Bloody Saturday. In one possibly controversial instance of compression, the day’s shootings and beatings seem to be attributed only to the Special Police rather than to the Royal Northwest Mounted Police. Of course, there is much more to be said about the history of the strike, and this can be pursued in the many books, articles and documents on the subject.[4] As a local Les Misérables, the film does not propose to rehearse the historiography but to present an affecting human drama. This it does superbly well, while also affirming the lasting relevance of the strike and its significance in Canadian history.[5]

Stand! opened on 29 November in more than 30 theatres, not a bad start for a Canadian film. Opportunities to see it dwindled after that. I did not see the film until January, when it received its one and only showing in my province. My local daily newspaper was satisfied to print a Postmedia review headed “A Heritage Minute disguised as a two-hour movie musical.” However, the Globe and Mail, known to be a tough sell, gave Stand! a generous 3.5 of 4 stars along with a positive review under the title “Winnipeg General Strike musical delivers a meaningful story.”

Judging from comments on the Cineplex website, some viewers loved the film and gave it a full four or five stars. “Excellent! People were clapping at the end,” read one comment; and another said “Great story, well told, beautiful music, and important messages that are relevant 100 years later!” Among those who wrote comments, the average score was 3.8 stars. But among all who rated the film, without making comments, the average was lower, at 2.15. Certainly Canadian films, historical musicals or not, are not the usual moviehouse fare. Audience expectations are only one of the challenges of distribution for presenting popular history on film.

Despite the limited response to date, Stand! is a polished and professional film that should continue to circulate well beyond the initial release. It is currently touring festivals and scheduled for release in the United States. In due course it should also appear on television or streaming services. Downloads and DVDs can be expected. Moreover, the film may also bring more attention to the original stage musical Strike! – an ensemble piece that should be a good candidate for high school musical productions. With luck, we can also hope the film will be complemented by the history and social studies curriculum.

David Frank is a professor emeritus in Canadian history at the University of New Brunswick.

[1] See my chapter, “In Search of the Canadian Labour Film,” in Malek Khouri and Darrell Varga, eds., Working on Screen: Representations of the Working Class in Canadian Cinema (Toronto: University of Toronto Press, 2006), pp. 26-45, which includes some discussion of films about the Winnipeg General Strike, actual and potential, pp. 31-34.

[2] How was the film? Thumbs up! In thinking about how to answer more fully, I realized that I had spent a good deal of time discussing this very thing in an introductory course called Canadian History on Film. My comments here flow from the questions students addressed in writing about historical films.

[3] See Robert Rosenstone, “The Historical Film,” in his Visions of the Past: The Challenge of Film to our Idea of History (Cambridge: Harvard University Press, 1995), pp. 45-79, and his History on Film / Film on History (Harlow: Pearson Education Limited, 2012).

[5] The film seems to have attracted some interest in the Wikipedia entry on the strike, which has been relatively stable and reliable at least since June last year. Usage peaked at more than 400 daily page views on the weekend Stand! was released and has settled down to an average of 100 since then. During the anniversary events last summer, however, daily page views were running about 2,000 on 15 May (the start of the strike) and 21 June (Bloody Saturday).

One thought on “Stand! Show and Tell (and Sing)”