The saying goes that we don’t really see infrastructure until it fails. 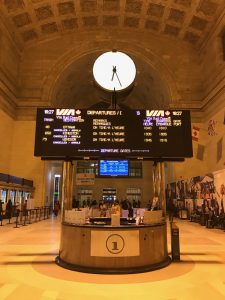 Over the past week, thousands of Canadians have seen their travel plans disrupted by Indigenous demonstrations blocking both Canadian National (CN) and Canadian Pacific (CP) railway tracks in British Columbia, Saskatchewan, Ontario, and Quebec. The actions are in support of the Wet’suwet’en fight against the Coastal GasLink pipeline project that crosses their territory in Northern British Columbia, as well as the RCMP response to their demonstrations. While many elected band councils have approved the pipeline, the hereditary chiefs have not, laying bare the complexities of the colonial relationship between the Crown and Indigenous peoples in Canada.

The most significant of the blockades is at Wymans Road, east of Belleville, Ontario. This level crossing, known to railroaders as Marysville, sits on the edge of Tyendinaga Mohawk Territory. Since February 6, a camp has been set up at the crossing, making it unsafe for trains to pass.[2] 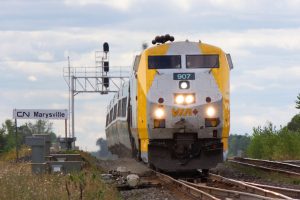 Photo of a VIA train at Marysville on August 24, 2019. This is the site of the blockade and I was standing right where the camp is now. (Photo by author)

Not only is Marysville on the CN mainline between Toronto and Montreal, but it is also the route used by all VIA Rail passenger trains on the Toronto-Ottawa and Toronto-Montreal routes. On February 13, CN announced it was shutting down the eastern portion of its national network because the blockade had caused a week’s worth of freight trains to clog its yards and tracks.[3] Around dinner time, VIA Rail announced that CN was “no longer in a position to fulfill their obligations under the Train Service Agreement” and that all VIA trains across the country were cancelled.[4]

That railway tracks were chosen as protest sites highlights the strong colonial symbolism attached to railway development in Canada, but the blockades also show how precarious passenger rail is in Canada today. While passenger trains once crossed the country, many parts of Canada haven’t seen a passenger train in years. How did this happen?

Railways were integral to the expansion and settlement of Canada by Europeans, but the carrying of passengers was always of secondary concern to the railway companies.

Even with government subsidies, railways built in 19-century Canada were private companies that relied on freight revenues to operate.[5] Passenger trains carried settlers who were potential freight customers for the railway companies.[6] Despite the narrative popularized by Pierre Berton, the settlement of the Prairies was a way for the railways to generate traffic rather than building a nation.

From an infrastructure perspective, Canada has always presented the double challenge of a large landmass with a small population, and rail was the best means of crossing long distances well into the 20th century.

The increased use of cars and of road building projects, especially the Trans-Canada Highway after WWII, hurt ridership numbers on medium-distance routes as people embraced the North American culture of automobility. The growing popularity of air travel came to dominate long-distance travel across Canada, further hurting passenger rail. But despite dwindling passenger numbers, the federal government required CN and CP to continue running passenger trains as part of their operations.

By the 1960s, the situation had become dire, and CP wanted out of the passenger business entirely. CN had a harder time since it was a Crown corporation with a more service-oriented mandate. Both railways’ passenger trains limped on with federal subsidies until the 1970s.

South of the border, American railroads were also struggling and the National Railroad Passenger Corporation (Amtrak) was formed in 1971 as the federal government took over passenger trains from the railroads.

In Canada, CN rebranded its passenger trains as VIA-CN (in the bilingual zeitgeist of the day) in a last-ditch attempt to attract passengers back to the train. But the losses kept piling up. In 1977, the federal government bought the VIA concept from CN and began integrating CN’s and CP’s trains into a more unified network. In 1977, VIA Rail Canada was established as its own Crown corporation through an Order-in-Council, and in 1978, VIA officially took over CP’s passenger trains, thereby relieving both of Canada’s major railways of their passenger operations.

During the 1980s, neoliberalism reached the Canadian government. Successive Liberal and Conservative governments reshaped VIA’s network in the face of mounting subsidy costs and partisan squabbles.

In 1990, the Mulroney government dealt a major blow, cutting VIA’s routes in half, laying off a third of its employees and gutting the subsidies. Major communities such as Thunder Bay, Regina, Calgary, and Fredericton lost all their passenger trains, as did countless small towns that had to rely entirely on roads for the first time.[7] As part of the cutbacks, most remaining VIA routes were consolidated into a skeletal system running on CN’s tracks because both were Crown corporations. 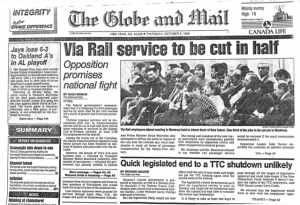 Front page of the Globe and Mail announcing Brian Mulroney’s massive cut to VIA rail service.

This decision is why CN’s shutdown this week took VIA down with it. When the federal government privatized CN in 1995, the new company embarked on an aggressive plan to boost shareholder returns, which meant prioritizing freight trains on its tracks. On almost all of its routes, VIA operates as a guest.

Created by Order-in-Council, VIA has little protection and continues to receive federal funding at just above a maintenance level.[8]

Since the massive cuts in 1990, VIA has operated more like two entities: an intercity service in the Toronto-Ottawa-Montreal corridor, and a dwindling national network. Ridership and train frequency in the corridor continue to grow, while cuts continue elsewhere. When the Bank of Canada issued a $10 bill depicting VIA’s national network in 2013, the map on the bill was quickly made inaccurate by the abolition of service on Vancouver Island and the Gaspé Peninsula, both cuts the result of increased maintenance costs.[9]

Several regional railways have continued to operate their own passenger trains independent of VIA. On the West Coast, the provincially-owned BC Rail (formerly Pacific Great Eastern) carried passengers between North Vancouver and the interior until 2002, when it was deemed unprofitable.[10]

In Ontario, the Algoma Central operated both passenger and tourist trains between Sault Ste. Marie and Hearst. These continued with government subsidies even after the line was bought by Wisconsin Central and later by CN. Algoma Central’s passenger service survived until 2015, when the federal government and CN could not reach a subsidy agreement (the tourist train continues).[11]

The provincially-owned Ontario Northland operated numerous services from North Bay through Northeastern Ontario to Moosonee near James Bay. In 2012, after decades of gradual service reduction, the provincial government tried to divest itself of Ontario Northland, but ultimately settled for selling its telecommunications division and cancelling the Northlander passenger train between Toronto and Cochrane.[12] In Vancouver, Toronto, and Montreal, commuter rail continues to grow, suggesting that passenger trains still have a place, if only in Canada’s largest urban centres.

Once the only way to cross the country, passenger trains have been propped up by the federal government and continue to run. However, the lack of legislative protection, the skeletal network, and the continued aversion to government subsidies mean that passenger rail’s future outside of the Toronto-Ottawa-Montreal triangle is no more certain than it was when VIA was established in 1978.

Thomas Blampied is a PhD candidate in the history department at the University of Toronto. His research focuses on railway development in Northern Ontario and its impact on Indigenous communities. In 2014, he published Call of the Northland about the Ontario government’s attempt to divest itself of the Ontario Northland Transportation Commission and the cancellation of the Northlander passenger train. He tweets @ProBonoHistory.

[1] For an excellent primer on the issue of elected and hereditary chiefs, see Kate Gunn and Bruce McIvor, “The Wet’suwet’en, Aboriginal Title, and the Rule of Law: An Explainer,” First Peoples Law, February 13, 2020, https://www.firstpeopleslaw.com/index/articles/438.php.

[4] “Cancellation of VIA Rail Services,” February 13, 2020, https://www.newswire.ca/news-releases/cancellation-of-via-rail-services-825749159.html. A subsequent release clarified that services not relying on CN infrastructure in Manitoba and Northern Ontario would continue to operate, “Update: VIA Rail Cancels Most of its Services,” February 13, 2020, https://www.newswire.ca/news-releases/update-via-rail-cancels-most-of-its-services-814158913.html.

[5] Canadian National, a federal Crown corporation, was formed in 1919 in response to the near-collapse of several railroads, including the Grand Trunk, National Transcontinental, and Canadian Northern. It was privatized in 1995.

[8] There have been over a dozen studies on how to improve service in the Toronto-Ottawa-Montreal corridor with high-speed service, but little has changed. New trains will begin entering service in 2022 and a new rail corridor in Ontario and Quebec is being proposed. “About VIA,” VIA Rail, https://corpo.viarail.ca/en.

[10] BC Rail Annual Report, 2002, https://www.bcrco.com/2002report.pdf. A shuttle service is operated by CN (who bought BC Rail in 2004) between Lilloet and D’Arcy for the benefit of the Seton Lake First Nation.

[12] For a detailed discussion of the divestment and service cuts, see Thomas Blampied, Call of the Northland: Riding the Train That Nearly Toppled a Government (Whitby, ON: Northland-Book, 2014).