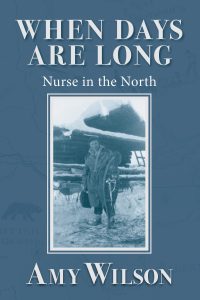 In 1949, Amy Wilson accepted a nursing job that took her from her Edmonton home to northern British Columbia and Yukon. In the position, she was responsible for covering over 500,000 sqaure kilometres and serving around 3,000 Indigenous Peoples in the North. Upon her arrival, she was confronted with a diphtheria epidemic and pushed for the immediate transportation of supplies and medications for the communities.

This was the start of her career, which saw her serve as not only a health professional, but also an advocate, partner, and friend. In her letters and reports, she would write of the challenges faced by northern communities and the damage of colonization. She would use her position to advocate and fight for those who had been deliberately ignored by colonial structures. At the same time, her travels across the North were deeply personal journeys. A closeted woman who was not accepted at home, her time in the North provided her space and time to feel more comfortable with herself and establish a social system in which she could find support.

In 1965, her memoir No Man Stands Alone was published, shedding more light on conditions in the North and the consequences of the government’s actions. Over 50 years later, the book is being re-published under the title When Days Are Long: Nurse in the North. In a time when the importance of quality medical professionals has, again, been highlighted, the book offers a unique insight into life in the North during the mid-20th century while also serving as a reminder of the damage done by colonial systems and how little has changed. To help foster change, all residuals from the book will be donated to the Canadian Indigenous Nurses Association’s Jean Goodwill Scholarship.

In this episode of the History Slam, I talk with Amy Wilson’s niece Laurel Deedrick-Mayne, who wrote the foreword to the new edition. We talk about the family’s memory of Amy, her motivation for going north, and the desire to re-issue the book. We also talk about the challenges of nursing, Amy’s relationships with northern communities, and her legacy.