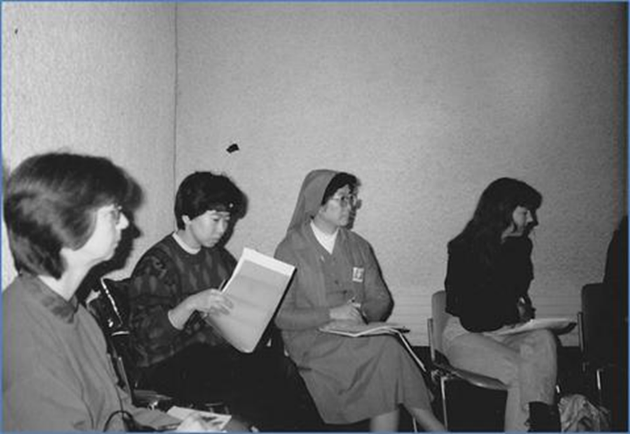 Pictures are powerful. They can tell strong stories.

This post accompanies a new e-dossier that tells the history of a Canadian campaign for international human rights through images (http://historybeyondborders.ca/?p=220). While the full photo history looks at a range of groups that worked for human rights in Timor-Leste (East Timor) when it was under Indonesian military rule in 1975-99, this post zeroes in on one, the East Timor Alert Network (ETAN). Full disclosure: I am telling a history that I was also involved in, as an ETAN member from 1986 to 1996.

East Timor is not well known, but it matters for the study of transnational history. The international solidarity movement for East Timor may be the single most successful such movement in the late twentieth century. It was a transnational movement with a high degree of women’s leadership, and it proved highly effective. 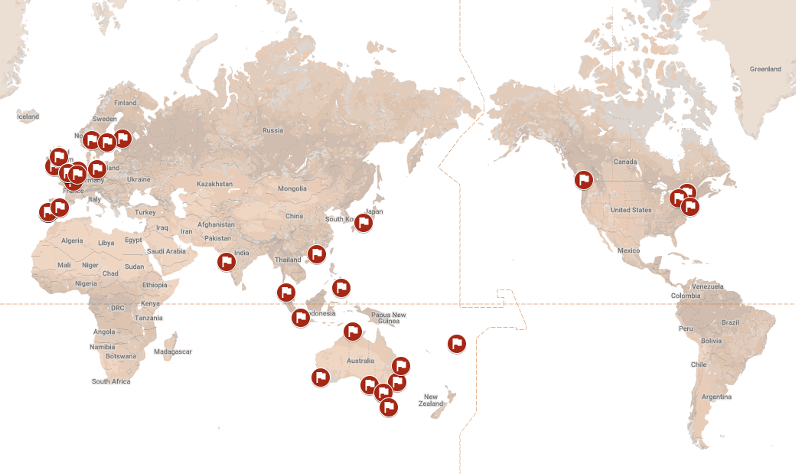 Mapping the movement: members of the International Federation for East Timor (based in Kyoto with a UN office in New York), 1999.

A tiny country of fewer than a million people, East Timor declared independence from Portugal in November 1975. Within days, it faced invasion from a much bigger neighbour, Indonesia. Indonesian diplomats and generals were able to convince Western policymakers from Henry Kissinger to Pierre Trudeau to Australian Labor prime minster Gough Whitlam that an independent Timor-Leste would represent “another Cuba” within the vast and wealthy islands of Indonesia. All these leaders knew an invasion was coming.

On the Friday before the weekend invasion (troops landed on 7 December 1975), Indonesian diplomats told the Canadian embassy directly that they would soon intervene in Timor-Leste. Over the weekend, they landed troops and began an organized killing spree. On Monday morning, the Pacific division in Canada’s Department of External Affairs threw together an anodyne note in case the issue came up in parliament, adding a single-sentence “confidential comment”, which declared there was no “viable” solution other than Indonesian rule. This hastily constructed argument became the basis for more than two decades of Canadian policy:

Solidarity groups worked in support of Timorese resistance diplomats and fighters to back the Timorese right to self-determination. A minnow against an Indonesian whale backed by not one, but both superpowers, they nevertheless changed government policies around the world, including in Canada.

How did that happen? It’s one of the main questions I try to address in Challenge the Strong Wind: Canada and East Timor 1975-99. The book addresses both Canadian government diplomacy and the efforts by Canadian activists to change government policy. This post looks at the activist campaigns, trying to read their performances as texts which amplified the voices and activist performances of the Timorese resistance globally.

Performance as text: “reading” the visuals of a demonstration 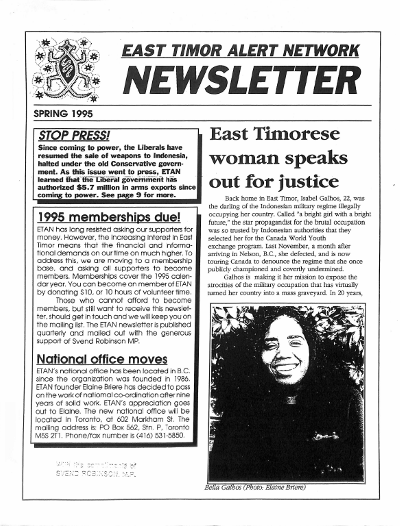 Bella Galhos on the cover of ETAN Newsletter, Spring 1995, from ETAN files. 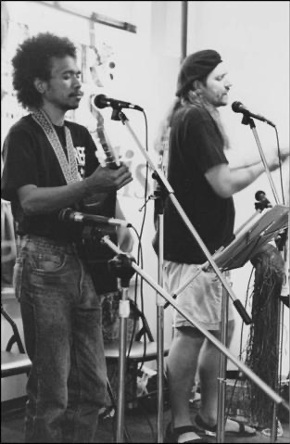 Abe Barreto in concert with Aloz MacDonald, from ETAN files. 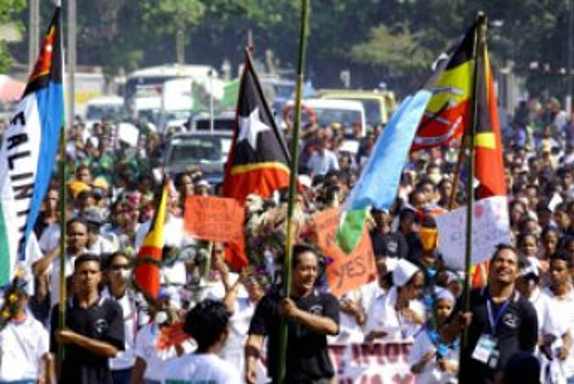 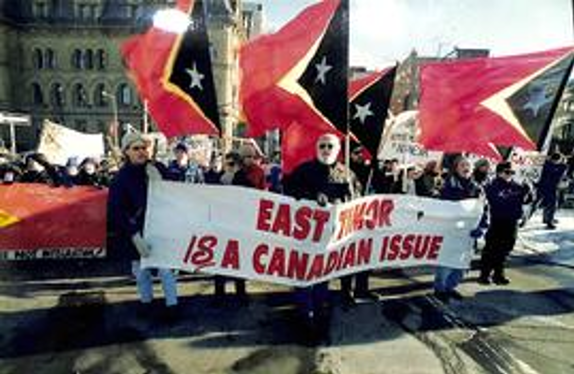 Following Clifford Geertz (http://hypergeertz.jku.at/GeertzTexts/Deep_Play.htm), we can read a performance or an event as a text. One example of this was a key demonstration in Ottawa in December 1995. Organized by ETAN, the protest echoed the visual style of a famous rally on 12 November 1991 in Timor-Leste, which filled the streets of the Timorese capital city and ended in a hail of bullets fired by Indonesian troops at the Santa Cruz cemetery. Like the Timorese rally, the one in Ottawa aimed to fill the streets with Timorese flags and banners in order to deliver a clear message in support of Timorese independence.

Reading this demonstration, and especially its images, provides insights into the nature, and effectiveness, of transnational activism around East Timor in this period.

The protest began on a stage in front of the Indonesian Embassy on 7 December 1995. After a consultation with the local police, Bella Galhos delivered a speech. Along with Abé Barreto Soares, Bella Galhos was a student who sought and received refugee status in Canada, and then devoted himself to the Timorese diplomatic struggle. Galhos, Soares and others influenced the solidarity movement activity through close contact and encouraged duplication of tactics. 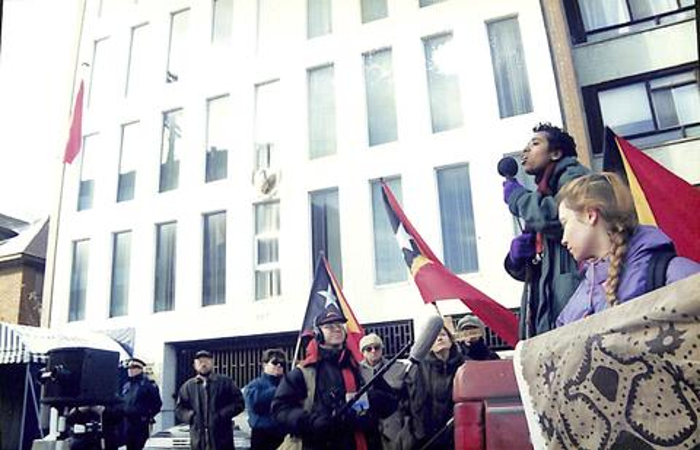 Protesters then took to the streets. They walked through the city centre to the Canadian Human Rights memorial where Galhos spoke again. The crowd grew as it moved back on to the streets. 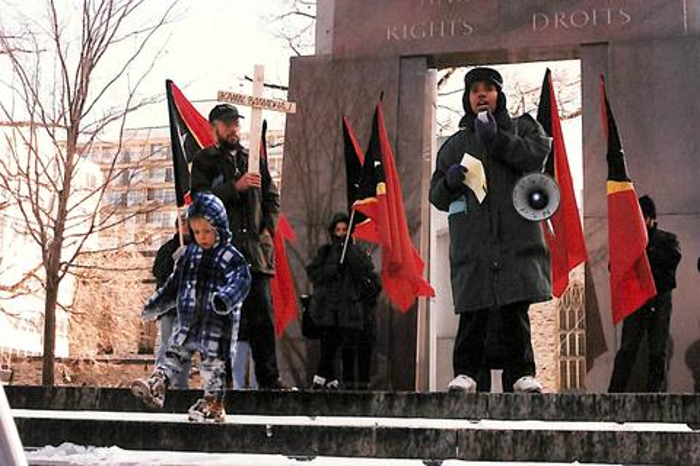 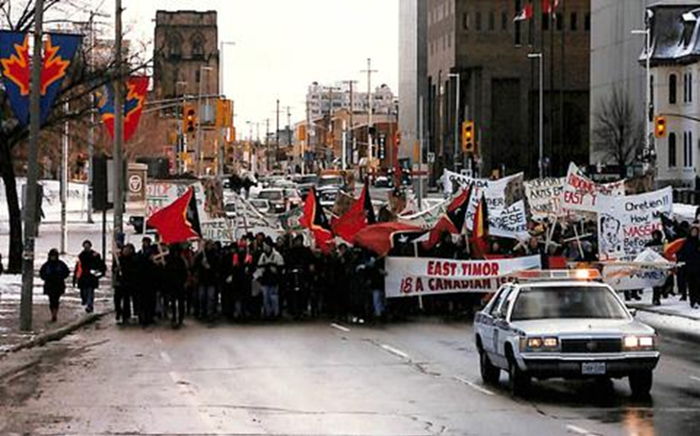 Arriving at Parliament Hill, protesters laid down crosses with the names of people killed at the Santa Cruz massacre on parliament’s front steps, then turned and faced the city with parliament as the backdrop to their banners. The Timorese flag was flown by a Timorese woman at the heart of Canada’s government, who walked the cold pavement alone for a time. 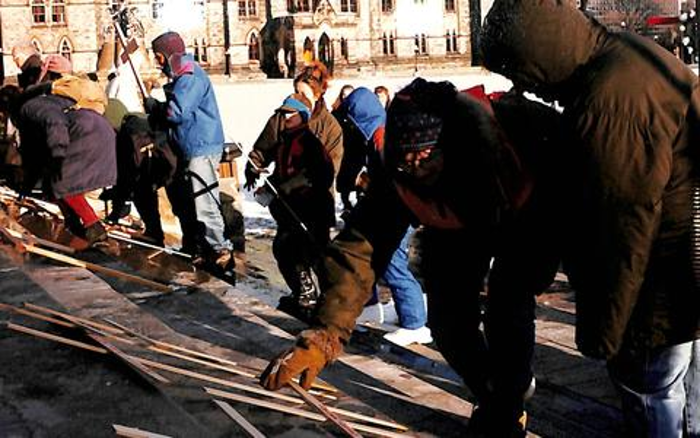 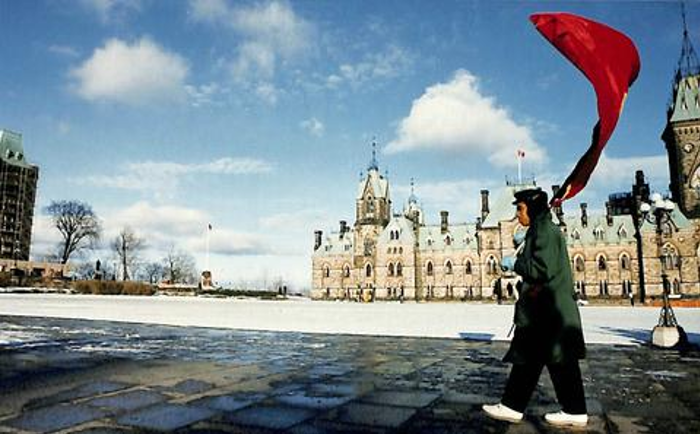 How can we “read” this demonstration? Its date insisted that, in the Timorese resistance slogan, “to resist is to win.” Two decades of occupation saw more resistance than ever. Its route mapped the connection between the Indonesian and Canadian governments, from the embassy to parliament. Messages on banners underlined the point: the lead banner declared “East Timor is a Canadian issue,” not a far-away forgotten struggle. A stop at the human rights memorial evoked themes of human rights that are dear to the Canadian self-image.

The Timorese flags, sewn by local activists, made the march into a block of vibrant reds with tones of black and yellow, and forced onlookers to ask whose flag that was – an invitation to ask questions. Crosses evoked tragedy and Christian undertones while insisting on speaking the names of the dead – themselves known thanks to clandestine research in Dili and transmitted on new electronic communications networks.

At parliament, the crowd performed mourning – the laying down of the crosses – and then activism, with the display of banners that had been less visible on the streets. Each banner drew a direct Canada-Indonesia tie, from arms sales to business handshakes to the use of Canadian tax money to support the Indonesian government. The messaging was immediate, not distant. East Timor mattered, it was here in Ottawa, and its tragedy was directly tied to Canadian support for the Indonesian dictatorship.

The messaging was consistent and the support growing in Canada. By 1995, Canadian government officials were saying they had to do something for Timor-Leste, if only to “get ETAN off our backs.”

Needling, visual demonstrations, vigils, fax blasts – the tools of the ETAN campaign, the government’s files show, made an impact. ETAN was “the most energetic and single minded of NGOs that I have to deal with,” one official wrote in clear irritation to a colleague.

The exchange underlines growing solidarity movement coordination with Timorese diplomatic front leaders. The same is evident in, for instance, the 1997 APEC summit in Vancouver. An alternative “People’s Summit” invited José Ramos Horta to be keynote speaker, and Bella Galhos released photos of torture victims – visceral visual messages themselves – to the media.

The photo of that event is now itself framed by text in the Chega! exhibit in Dili, flecked with virtual blood. It shows the continuing power of images, and of the display of powerful images, in protest – and the power of protest to deliver change. A little over a year after APEC, the Canadian government accepted ETAN demands that it support the Timorese right to self-determination. Within two years of APEC, Indonesian troops were leaving and Timor-Leste was on the road to the restoration of independence. Protest worked and reading the visual record of public demonstrations such as the one held in Ottawa on 7 December 1995 provides insights into the impact of a powerful transnational protest movement. 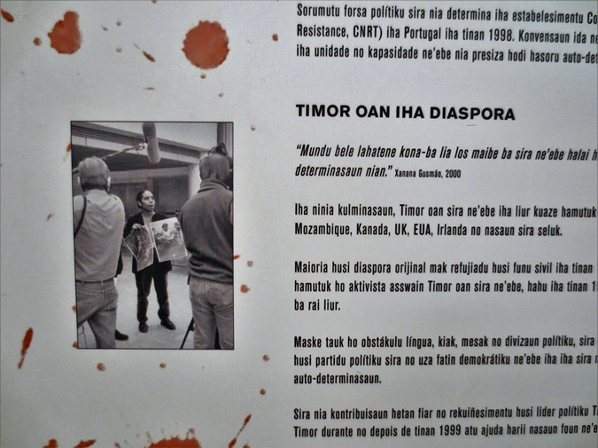 Bella Galhos releases photos of Timorese women being tortured, at the People’s Summit on APEC, Vancouver, 1997. The image is reproduced in the Chega! exhibit in a former political prison in Dili, Timor-Leste.

David Webster teaches History and Global Studies at Bishop’s University. He is author of Challenge the Strong Wind: Canada and East Timor 1975-99 and co-editor (with Greg Donaghy) of A Samaritan State Revisited: Historical Perspectives on Canadian Foreign Aid. A former member of the East Timor Alert Network, Webster currently serves on the international advisory council of the Centro Nacional Chega, the Timorese centre for truth and reconciliation.