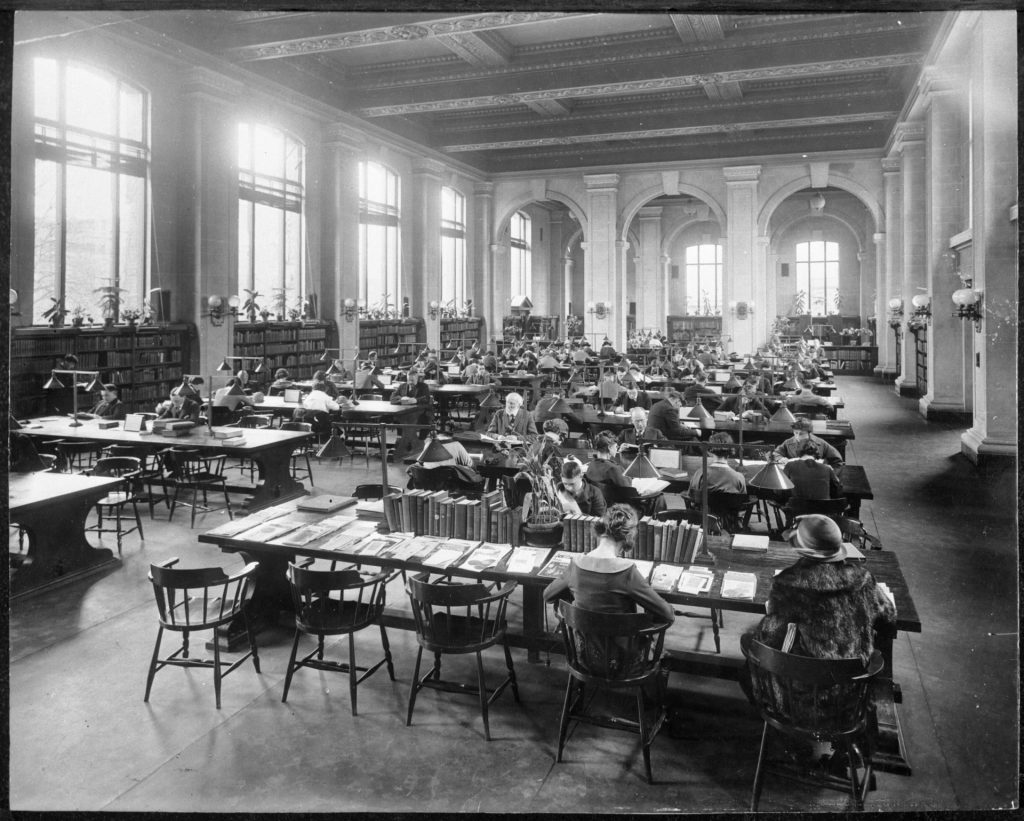 1. Toronto Central Library, 1920. The reading room was the heart of the library until it was renovated in 1930 to create a circulating library. Courtesy of Toronto Public Library.

As public buildings closed their doors in March in response to the COVID-19 pandemic, public libraries across Canada pivoted to strengthen connections with communities online, offering virtual story times and lending out wi-fi hotspots in addition to adapting ongoing work ranging from providing reading recommendations to supporting Indigenous language revitalization.

Yet when the Toronto Public Library was established in 1884 it had no home of its own. Two years previous, provincial legislation enabled municipalities to collect a levy in support of free public libraries. Although the Toronto Public Library opened in a former Mechanics’ Institute building downtown and soon expanded to communities including Parkdale, Islington and Highland Creek, for its first two decades the library lacked dedicated space and instead rented facilities.

It was not until 1903 that a grant from the Carnegie Foundation enabled the construction of a central library and three branches. The Carnegie Foundation distributed the fortune of industrialist Andrew Carnegie to build libraries and supported the construction of more than 2,500 around the world and 125 in Canada. Of these, 111 Carnegie libraries were built in Ontario with ten in Toronto. There were three conditions for receiving a Carnegie grant: the community had to provide land, cover operating costs once the library was built and offer services for free.

In addition to meeting these conditions, many Carnegie libraries shared an aesthetic. The Corinthian capitals of Toronto’s former central library demonstrate the dominance of neoclassical architecture for civic buildings at the turn of the 20th century. The style spread across North America after architects trained at the École de Beaux Arts in Paris brought back influences from ancient Greece and Rome, Renaissance Italy and 18th century France.

Toronto’s central library was designed by Wickson & Gregg and A.H. Chapman, Associated Architects. Chapman had apprenticed on Carnegie libraries elsewhere in Ontario and applied the neoclassical emphasis on symmetry and order to these projects. Size and ornament were used to communicate a hierarchy of spaces. 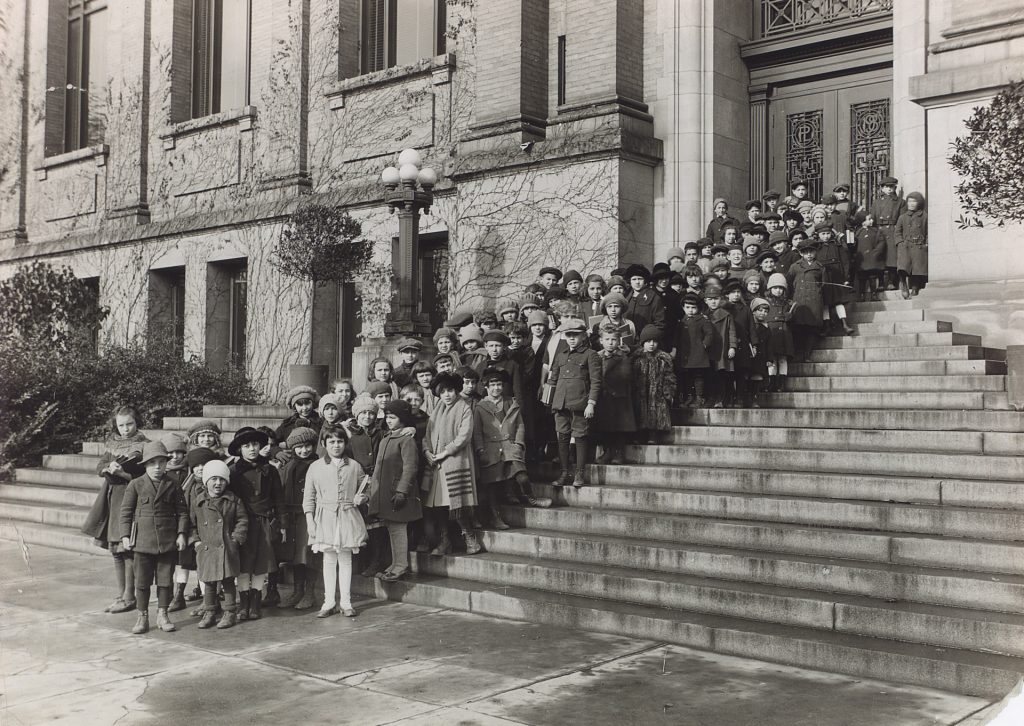 2. Children standing outside the Toronto Central Library, 1921. During the 1920s and 30s it was not unusual for more than 100 children to attend story time under the leadership of Lillian H Smith, head of children’s services. Courtesy of Toronto Public Library.

At the central library, the most important part of the building was the reading room. Two-storey windows provided natural light for readers while an ornate ceiling offered lots of room for minds to wander. Unlike libraries built later in the century, the focus of Carnegie libraries was on reading, not browsing, because books were only accessible by request from a librarian. It was not until 1930 that the central library was renovated so that readers could stroll among the stacks.

Yorkville Public Library is another example of a Carnegie library built in Toronto and, due to its size, more representative of other Carnegie-funded projects across Canada. Now the oldest of the Toronto Public Library buildings, the Yorkville branch was designed by Robert McCallum and opened to the public in 1907. 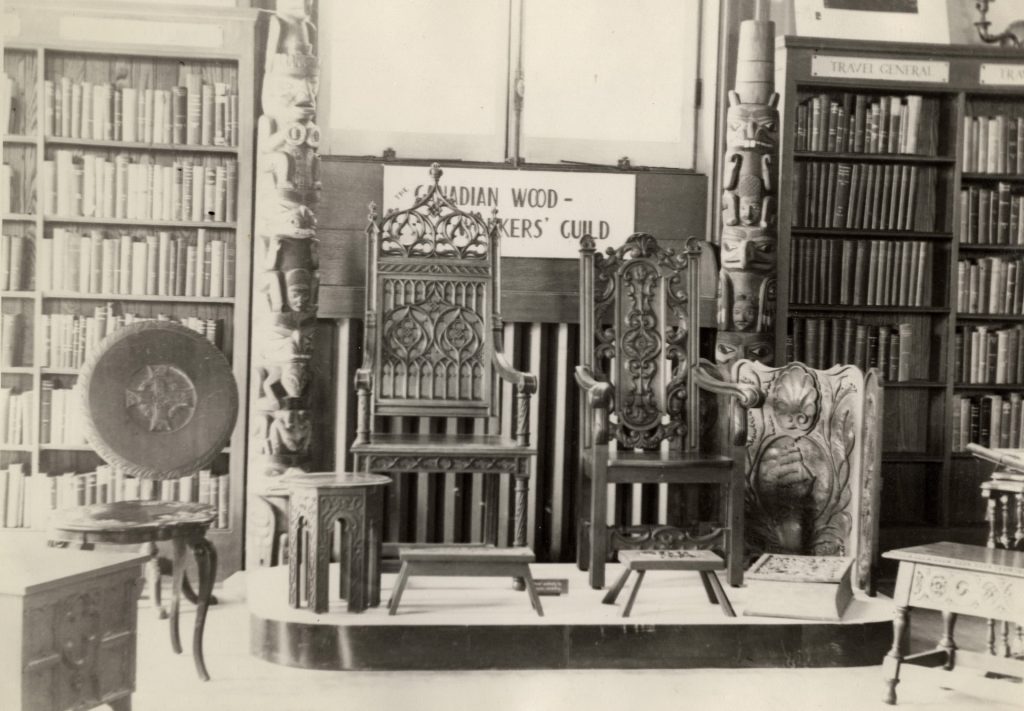 The Yorkville branch and other Carnegie libraries are firmly neoclassical: the sturdy symmetry and simple columns became landmarks in many Ontario towns that secured Carnegie funding. Inside, like Toronto’s central library, other Carnegie buildings were dominated by a light-filled reading room scaled to the size of the community, and stacks that only later opened to browsing book borrowers.

The last Carnegie library funded in Toronto was completed in 1916, but by that time the city had already gained experience financing its own buildings, opening what is now the Bloor/Gladstone branch in 1913. Over the decades that followed, the public library system continued to expand, particularly during the postwar boom. By the 1950s, the library had a regional role, serving not just the City of Toronto but the rapidly growing metropolitan area. 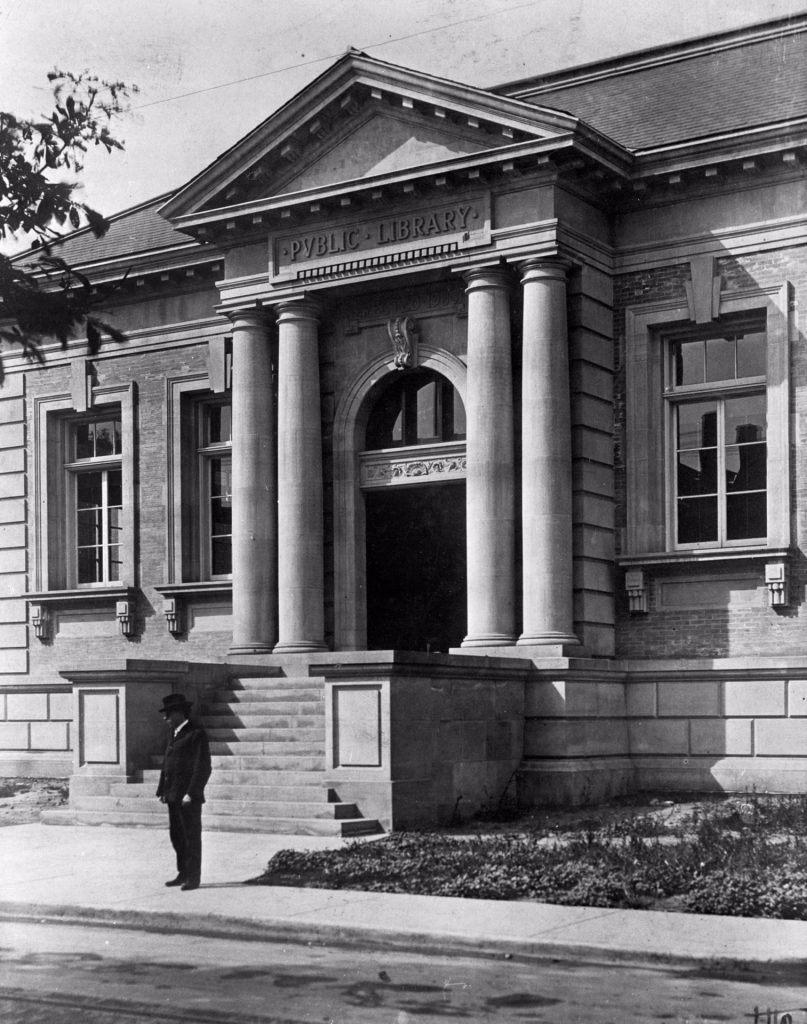 Mimico is one example of a neighbouring municipality that built a local library with Carnegie funding in 1914 only to be integrated into the Toronto Public Library system later. In 1966 the Carnegie building was demolished to make way for a library marking Canada’s centennial. Although the brick-clad Mimico branch remains an example of mid-century style, other architectural trends would prove less enduring. Brutalist libraries constructed in the suburban communities of Etobicoke and North York in the 1960s and 70s were renovated to soften the concrete that made the buildings look more like bunkers than Greek temples.

Following this period of rapid growth and shifting styles, the Reference Library set the tone for a new kind of library. Built to meet the needs of the metro region once the 1909 central library could expand no further, the Reference Library was designed to serve residents of the suburbs but also animate a downtown strip at the junction of two subway lines.

The original plans by Raymond Moriyama Architects proposed a glass cube that would reflect the surrounding streetscape by day and expose tiered stacks that rise around a five-storey atrium by night. But the Toronto of the 1970s was still a red-brick city and even the most ambitious projects needed to respect the architectural template set by the city’s Victorian core.

Facing pressure from Toronto City Council, the architects clad the Reference Library in reassuring red brick and stepped it down to the street to blend with the neighbourhood. Despite these external changes, some things hadn’t changed since the introduction of circulating services at the central library in 1930: when the Reference Library opened to the public in 1977, it still relied on an analogue card catalogue. 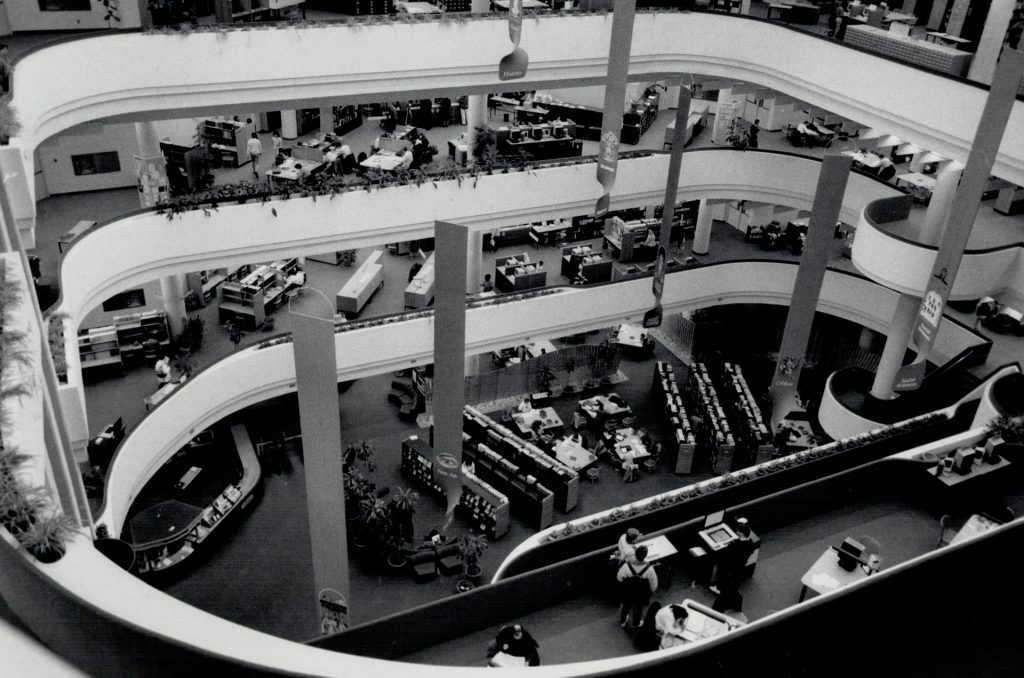 5. Reference Library, 1977. The Reference Library’s tiered atrium has become an iconic location, appearing in the graphic novel Scott Pilgrim vs. the World and a music video by The Weeknd. Courtesy of Toronto Public Library.

A major renovation of the Reference Library in the early 2000s demonstrated how quickly technology had transformed library services and how firmly the building had come to serve as the city’s living room. The renovation refreshed the building’s interior and prepared the library to lead in a digital era. It integrated computer labs and collaborative workspaces and made space for a 3D printer and other technology to support creation and experimentation.

The spirit of collaboration and connectivity was also reflected in updates to the exterior. The creation of a glass foyer surrounding the main entrance introduced elements of the glass cube that had been unpalatable in the 1970s. A café and gift shop added at street level strengthened the connection between the library and the sidewalk, encouraging pedestrians to drop by and bringing the building into conversation with the surrounding stores.

The Lillian H Smith branch is another library in conversation with its surroundings, in this case thanks to the mythological creatures that flank its main door. Yet the griffin and the winged lion are not only guardians of a busy street but also protectors of the library’s past.

The building is named for Lillian Helena Smith, who joined the Toronto Public Library as the first head of the Children’s Department in 1912. By the time she retired in 1952, she had established children’s services at 30 schools, 16 libraries, two settlement houses and the Hospital for Sick Children.

The branch that now bears Smith’s name is a testament to the international reach of her legacy as the first professionally trained children’s librarian in the British Empire. In 1934, British librarian Edgar Osborne visited Toronto and was so impressed with Smith’s work that he donated his personal collection of rare children’s books to the library. 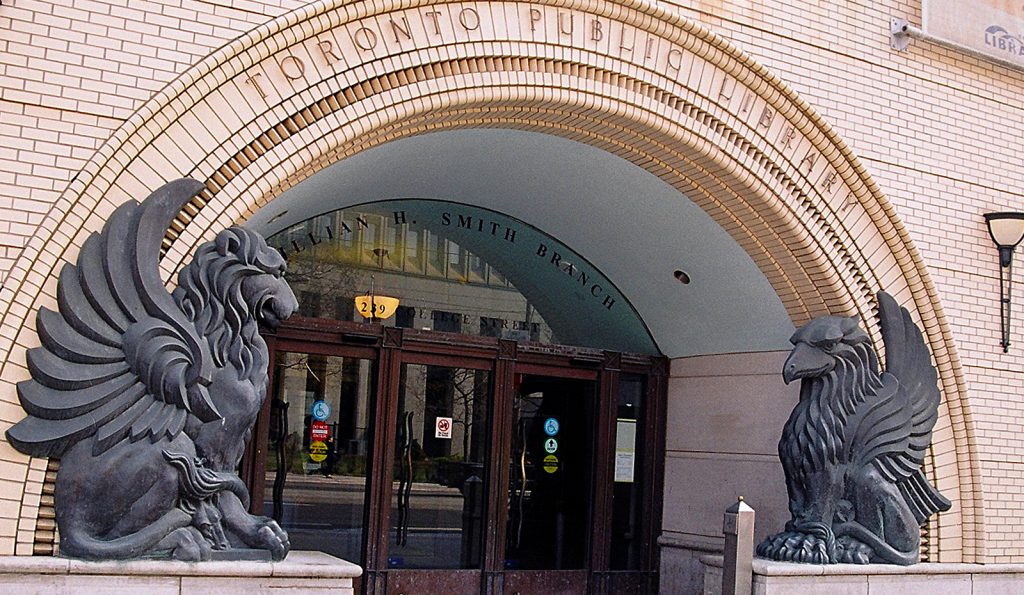 6. Lillian H Smith Library, undated. The mythological creatures that guard the entrance of the building echo the illustrations in the Osborne Collection of Early Children’s Books found inside. Courtesy of Toronto Public Library.

The Osborne Collection of Early Children’s Books has grown from this initial gift of 2,000 books to over 80,000 items. Later, another visitor to Toronto left a mark on the library: writer and illustrator Maurice Sendak was so enchanted by the Osborne books that he doodled a griffin that became the symbol of the collection.

This creature in turn inspired the magical main entrance of the current building (designed by Phillip H Carter Architect) that opened to the public in 1995. But the mythical creatures were almost axed from the plans because the library was built in the midst of a recession. Just as in the 1970s city council had opposed the proposed glass walls of the Reference Library, in the early 1990s, elected officials debated whether the griffin and her friend were too extravagant for an economic downturn.

From the hierarchy of spaces and classical influences of Carnegie libraries to the post-modern pastiche of the Lillian H Smith branch, libraries are expressions of the historical moments in which they were built. In the words of Andrew Carnegie, “we believe in the future so we build to last.” As learning supports and cultural experiences are increasingly accessed online, libraries are now at the forefront of creating inclusive digital infrastructure. If the past century of public libraries was defined by shared spaces, the next century will be shaped by equitable online engagement.

Beckman, Margaret, Langmead, Stephen. and Black, John. The Best Gift: A Record of the Carnegie Libraries in Ontario. Toronto: Dundern, 1984.

Stevenson, Siobhan. “The Political Economy of Andre Carnegie’s Library Philanthropy, with a Reflection on its Relevance to the Philanthropic Work of Bill Gates,” Library and Information History, 26 (2010): 237-257.