On a hot night in June, 1966, 18-year-old Matthew Charles Lamb woke up from a beer-fueled evening nap at his uncle’s house in East Windsor, Ontario. Released from the Kingston Penitentiary only seventeen days earlier, Lamb was resentful about the conditions of his parole, and depressed about his future. He got up, grabbed his uncle’s gun and a box of ammunition from the closet, and walked out into the night. In a series of seemingly random encounters on Ford Boulevard, he shot twenty-year-old Edith Chaykoski, her older brother Kenneth, and their 21-year-old friend, Andrew Woloch. He ran across the street, shot and injured a girl he saw silhouetted in the doorway of her house, then walked two blocks, knocked on a random door, and told the elderly lady who lived there he was going to shoot her. After she threatened to call the police, he left out the back door, abandoning his gun, and returned to sleep in his uncle’s house, where he was arrested the next day. Edith Chaykoski and Andrew Woloch died of their injuries, and Lamb was charged with two counts of capital murder, which in 1966 carried a mandatory death sentence.

Who was Lamb, and why did he perform this act of seemingly senseless violence? Was this Canada’s first “spree killing”, a harbinger of a new kind of modern murder? So argues RCMP veteran and former history teacher, Will Toffan, the author of Watching the Devil Dance: How a Spree Killer Slipped Through the Cracks of the Criminal Justice System (Windsor: Biblioasis, 2020). 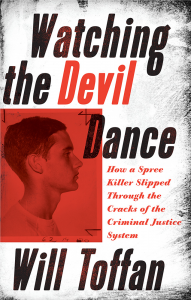 Toffan suggests that the increasing prevalence of spree killers, mass murderers and serial killers in the 1960s and 1970s reflected a profound social fracturing in North America, and the rise of a new type of personality: the criminal psychopath. In the book, Toffan combines extensive research into Lamb’s life and crimes with the stories of the more infamous psychopathic killers: Zodiac, Ted Bundy, David Berkowitz, John Wayne Gacy, etc. He also details the fascinating history of psychological research into psychopathy as a mental disorder, from the 1940s work of prison psychologist Hervey Cleckley to the later analyses of Robert Hare in British Columbia, whose checklist of psychopathic traits is widely used today.

Psychopathy is not recognized as a medical disorder in the Diagnostic and Statistical Manual of Mental Disorders (DSM5), (unlike antisocial personality disorder, which shares many of the same traits), but is estimated to affect 1% of the population and up to 25% of incarcerated criminals. While the severity of psychopathic traits varies by individual, psychopaths are defined by their cold-bloodedness: they lack affect and empathy for others as well the emotions of shame and guilt. They have no conscience; no internal guide to ethical behaviour. They are narcissistic, often with fragile self-esteem that they try to protect at all costs. They are prone to violent and risk-taking behaviour, and tend to hate authority figures, especially the police.

Lamb fit the psychopathic profile perfectly. Abandoned by his fifteen-year old, single mother, Lamb was mostly raised in poverty by his grandmother and her abusive second husband. In trouble from an early age, he showed a pronounced lack of affect. The survivors of his murderous spree described him as emotionless in the moments before he opened fire. Kenneth Chaykoski testified that: “He was just like anyone else talking. There was no emotion at all,” and the others described his voice and demeanor as “cool” and “cold”.

Similar testimony was given nine years later against James Hutchison, a killer who, along with Richard Ambrose, shot two handcuffed Moncton policemen in the backwoods in December 1974, and who was described over and over again in trial testimony as “cool and calculating”.

Psychopathic killers are generally considered legally and medically sane, as they are aware that their actions are wrong while they are committing them. But Lamb got enormously lucky at his trial, according to Toffan. Because of the random and motiveless nature of his attacks, his defense counsel was able to convince the judge and jury to find him not guilty by reason of insanity, and he escaped both hanging and prison.

Lamb was sent to Oak Ridge, the forensic mental health care unit for the Penetanguishene Mental Health Centre, then run by the controversial doctor Eliot Barker. Barker believed he could cure psychopaths and schizophrenics through “therapeutic community.” Treatment involved drugging them with hallucinogens, forcing them to sit immobile or handcuffed to chairs while subject to abuse, and eventually locking them naked in small groups in a brightly lit isolation pod called the “Capsule” for up to 11 days, while other patients watched and recorded their interactions.  Barker believed these immersive treatments would take patients on a journey of self-discovery and build empathy within psychotic individuals. But psychopaths who had received two years or more therapy at Oak Ridge were even more likely to violently re-offend, with a recidivism rate of 86% (click here for more about Oak Ridge).

Lamb thrived at Oak Ridge, becoming a model prisoner and a protégé of Barker. After only five years, his release was approved by an independent review board and the Ontario Executive Council. Lamb was discharged to Barker’s custody and lived with him and his family for a year before going abroad in 1973 to become a military mercenary, a career for which his experience at Oak Ridge had trained him well.

After being rejected by the Israeli defense forces, Lamb enlisted in the all-white Rhodesian Light Infantry (RLI), a commando battalion fighting against black nationalist guerrillas struggling towards independence. After one trip home where he proudly walked the main street in his uniform of the elite Special Air Service, he was killed by friendly fire in 1976. Rhodesian Prime Minister and white nationalist Ian Smith gave him a funeral with full military honours. When the Rhodesia Herald, a few weeks later, printed an article entitled “This Man was No Hero” about Lamb’s murderous past in Canada, Smith and others demanded the newspaper retract and apologize, which it did.  Lamb’s ashes were returned to his relatives and buried in Windsor.

James Hutchison was not so lucky. Sentenced to death in 1975, his punishment was commuted to life imprisonment after the abolition of judicial hanging in 1976. With the exception one brief period of parole, he spent the remainder of his life in prison, being denied parole a final time as an 83-year-old man in a wheelchair a few weeks before his death in 2011. His accomplice Richard Ambrose is still in prison.

Were these men psychopaths? Psychopathy is notoriously hard to precisely define, as it is not a medical condition, but usually a label based on the evidence of a criminal history and on a perceived lack of affect. But is it an actual disorder, a function of a faulty connection between the brain’s amygdala and frontal lobe, as Toffan argues? And if so, can it be treated? Was Lamb really helped by the treatment at Oak Ridge, or did he just find new environments where his violent and amoral tendencies could be seen as assets?

Barker’s optimism about treating psychopaths has been replaced in the Canadian justice system with an increasing focus on retributive punishment rather than rehabilitation, as attested to by the contrast between the fates of  Lamb and Hutchison. In 2011, the Harper government passed the “Protecting Canadians by Ending Sentence Discounts for Multiple Murders Act”, which allowed judges to impose consecutive rather than concurrent life sentences. Three men have since been sentenced to minimum 75- year sentences, most recently Justin Bourque, another young “spree killer”, who shot five RCMP officers in Moncton in 2014. As lawyer Alexandra Pester points out, the main purpose of the 2011 amendments “was to allow for a punishment-oriented mechanism for sentences for specific offenders where rehabilitation is futile.”

But new research seems to suggest that some psychopaths can be successfully treated, at least younger ones. Psychologists at the Mendota Juvenile Treatment Center (MJTC) for the most violent adolescent male prisoners in Wisconsin have successfully used intensive tailored therapy tied to a reward system (candy, video games and private music), and found that inmates’ social behaviour and their unemotional and narcissistic personality traits improved in the short and long term.

Could Mathew Lamb’s murders have been prevented if he had received treatment earlier?

While he was in Kingston Penitentiary, he was flagged as having violent criminal fantasies, and Toffan describes an incident in which Lamb was observed walking down the prison corridor with a mop handle shoved up his rectum, laughing as he dragged the mop behind him. (79). He was then admitted to Kingston Psychiatric Hospital for treatment of possible mental illness in March of 1966, but then released back to prison four weeks later and was out within three months.

If Lamb’s life is to serve as a cautionary tale, as Toffan intends, it seems to be for those in the criminal justice system to intervene at warning signs of escalating violence, before it’s too late.

Amy Bell is a Professor in the Department of History at Huron University College.  Her current research focuses on the history of crime, forensics, and attitudes to capital punishment in Canada and the UK.  For more information, visit her website or send her an e-mail at abell44@uwo.ca.