Canada Post just released a commemorative stamp for the community of Willow Grove, New Brunswick. Located east of the City of Saint John, it forms the core of what was the “African Settlement” set aside by the New Brunswick colonial government for Black refugees fleeing the United States during the War of 1812.

For more than twenty-five years, the new settlers fought for permanent grants to that tract of land near Loch Lomond. It was not until 1837 when seventy-four refugees were finally confirmed in their fifty-five-acre lots, which they only temporarily occupied by a special license. For many of these settlers, they struggled to exist. Most found it necessary to migrate to the city to survive at all.[1]

Eliza Taylor was one of those original Black refugees.

What we know of Eliza is revealed principally in her death notice carried in the Saint John Evening Gazette on 2 July 1889.[2] Although she seems to have had a long residency at Willow Grove, her later years from the 1870s onwards were spent as a widow, living with her son, John D. Taylor, in South End, Saint John.[3]

Residents referred to her as the “Belle of Loch Lomond.” Born in 1783 in Richmond, Virginia, Eliza Fisher was enslaved on the plantation of Royal Dobbins. Dobbins was reputed to be a master of 200 to 300 people under a system of chattel slavery. When four years of age, Eliza was carried by a British man-of-war to Halifax with 400 others. Due to the lateness of the winter season, the ship was diverted to Bermuda until the Spring.

By then the captain was ordered to Saint John and Eliza became servant to James Peters’ household in Gagetown for the next fifteen years. In 1800, she fled the estate and met James Taylor of French Village. They were married by Parson Willis out of Saint John. Within a few years, they joined other Black people who were granted lands by the Crown in the Loch Lomond area.

While resident at Willow Grove, they had at least one son. He may have been John Daniel Taylor, known as Daniel. Sometime after 1851, they moved into the city.[4] She was a resident of the alms house in Saint John where she died at an estimated age of more than 105 years.[5] At her death, Eliza was survived by Daniel and one grandson, Henry Thompson, along with five great grandchildren.

She was remembered by Saint John residents for her peddler stand on the corner of Sydney Street and King Square near her home where she bargained over “a few brush brooms, a pair of chickens or a pail or berries.”[6]

Her most outstanding public feature was her appearance. Eliza wore long flowing dresses with many colourful skirts and was often  accompanied by a parasol. Often, the dress was matched with a straw hat decorated with ribbons and flowers. This style was popularly known as “Dolly Varden.” Named after a character found in the 1839 Charles Dickens novel, Barnaby Rudge, it was in fashion between 1869 and 1875. Indeed, a song written by American Alfred Lee in 1872 captures the favour of the costume:

Have you seen my little girl? She doesn’t wear a bonnet.
She’s got a monstrous flip-flop hat with cherry ribbons on it.
She dresses in bed furniture just like a flower garden
A blowin’ and a growin’ and they call it Dolly Varden.

As late as 1904, the local city promotional magazine, The Gripsack, carried an article and picture of Eliza, who was affectionately referred to as the “Belle of Loch Lomond” under its header of, “Old Time Local Celebrities.” The recently identified photo was taken by George F. Simonson, matching the date of her appearance on the streets of Saint John in 1872. 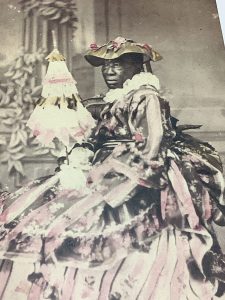 Simonson had a studio and gallery at 71 Prince William Street near the old Bank of New Brunswick.[7]

During the course of her promenades, she was chaperoned by a well-known teamster and horse trainer, Robert “Bob” Bustin. The article describing her triumphant travels was met by jubilant spectators as she exhibited her fashionably flowered dress with polonaise overskirt made from chintz or cotton. An anonymous author at the time penned a poem in honour of the occasion called, ‘The Colored Dolly Varden”, encompassing eight verses:

From “Liz Taylor, the Belle of Loch Lomond, in Her ‘Dolly Varden’ Suit,” The Gripsack, July 1904.

In addition to the photo taken by Simonson in August 1872 and housed in the Tennant Collection at the New Brunswick Museum, James Notman also captured Eliza’s image about the same time: 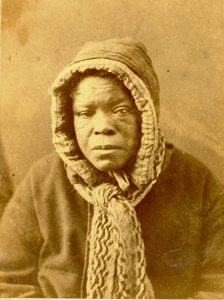 These are the earliest known photographs taken in New Brunswick of a Black person.