Of all the living history museums in the United States, Jamestown Settlement in Virginia and Plimoth Patuxet in Massachusetts are arguably the most famous. Understandably, these museums are very frequently compared. Both were built in the 1970s. Both recreate early Anglo-American colonial settlements. And both celebrate America’s “founding.”

For me, however, there is no comparison—Plimoth Patuxet’s approach to living history is simply better.

Plimoth Patuxet succeeds in several ways that Jamestown Settlement, a museum that is very similar on paper, does not. The primary distinction that caught my attention was Plimoth Patuxet’s insistence on transparency.

What do I mean by “transparency?” Plimoth Patuxet is upfront and honest about what visitors will see in each living history site on their grounds. They explain their approach in each space clearly. They justify why certain decisions have been made—for example, their choice to recreate Plymouth in 1627 is because that’s the date they have the most information about for the early settlement.

They do not commit to the same version of living history in the Wampanaog Homesite and English Village because the approaches taken in one do not make sense to force upon the other. The Wampanoag Homesite—the first site visitors experience in the museum—is staffed primarily by Indigenous cultural advocates, not historical interpreters or actors as in the English site. The site is a recreation of Hobbamock (a Pokanoket man)’s homesite based in part on records about him from the 1620s.

There are certain difficulties at the Jamestown site in offering the same level of specificity.

Despite these limitations, one thing every museum has the means to do is explain why they have created their exhibits the way they have, as the sign below, from Plimoth Patuxet’s Wampanoag Homesite, does briefly and effectively. 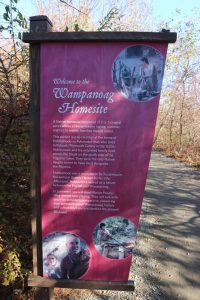 Sign posted on trail leading into the Wampanoag Homesite at Plimoth Patuxet, photo courtesy of author, 2019

Another easy, but important, thing Plimoth Patuxet does that Jamestown Settlement does not, is explain that their staff in the Wampanoag site are Indigenous. While it is clear through discussions I have had since my visit to Jamestown that the museum makes an effort to staff the Powhatan village with Indigenous interpreters, there is nothing on site that makes this clear.

In contrast, Plimoth Patuxet makes this obvious for visitors through descriptions placed on the maps given to guests at the visitor centre and signage placed along the trails leading into the Wampanoag Homesite. It’s made clear to guests that only staff of Indigenous descent will be wearing Indigenous apparel, in addition to clarifying that these staff are cultural advocates and educators—not role-players as visitors experience in the English Village.

Another sign (below) invites visitors to ask guides in the Wampanoag Homesite what Nation they are from—a small but effective way to start a dialogue with guests about recruitment practices. 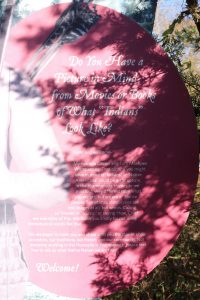 The same trend towards transparency continues into the English village, where guests have a map indicating the family names associated with each recreated house and each historical interpreter is assigned the role of a person known to live in Plymouth in 1627. The museum makes it clear in the video guests are asked to watch before entering the outdoor sites that these role-players will not break character, speak in 17th-century English, and will go about their work while you explore their space. This warning prepares visitors for what to expect in this site.

In response to my video essay about Jamestown Settlement, a volunteer from that facility left a comment in which he thanked me for my “concern” but assured me that they “have it all figured out.” History museums have not traditionally been as receptive to the review process as books, movies, or scholarship, but this does not mean they should be exempt from criticism. Putting museums’ methods in conversation with one another is valuable and, while I do not intend to disparage the work of anyone in the heritage industry, shows how these much-loved local institutions reflect specific choices and decisions about the past and how it is interpreted.

When I talk about my love for living-history museums with colleagues in academic history, I almost always get the same response. “Living history is fun, but you have to check your academic cap at the door.” I think Plimoth Patuxet is one museum that proves this isn’t true and one that seeks to bridge the gap between academia and public history.

No museum gets everything right. Being explicit about their choices and the reason for presenting their living history as they do, however, Plimoth Patuxet allows visitors to learn both about the recreated 17th-century life presented in their exhibits and also the historical process at work. The museum tells you both what they know about the settlements they have recreated but also how they know it.

There are several other ways in which the history at Plimoth Patuxet is noticeably more thought-out than the experience offered at Jamestown Settlement. For a full description, however, you’ll have to watch our review of the museum.