I visited the Notre Dame basilica in Old Montréal for the first time in 2018. Having recently had the opportunity to visit the Sainte Chapelle in Paris, I was excited to see how the basilica’s architects were inspired by, or deviated from, the 13th century chapel built in the Gothic Rayonnant style. 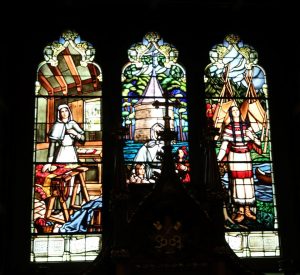 Wanting to learn more about the windows and the stories depicted, I set to researching them. To my surprise, it was difficult to find resources about the windows (at least, in English). Few lists describing their contents exist, and the ones I was able to track down (en Français) were incomplete, lacked information, or had incorrect information.

I was lucky to be able to visit the basilica again in 2020, just days before the Covid-19 lockdown was announced, and spent the better part of a morning taking a closer look at the 11 stained glass windows that line the ground floor. They commemorate French Canadian the heroes and heroines, mainly from the 17th century and present an idealized past—one that excludes less popular moments in French Canadian history like the conquest of Québec in 1759. 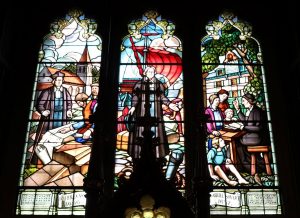 Window commemorating the arrival of the Sulpicians. Photo by author

The moments depicted were chosen by Olivier Maurault, the parish priest, who commissioned the windows to celebrate the basilica’s centennial. They were designed by Jean-Baptiste Lagacé, a Québécois artist, and built at the Francis Chigot workshop in Limoges, France.

But commemoration is fickle thing—especially when myth and history are entangled. To better understand the histories behind each window, I spoke with Dominique Deslandres (Université de Montréal) and Patrice Groulx (Université Laval).

Dr. Delsandres and Dr. Groulx walked me through each stained glass window and explained that these are the stories that, in the 20th century, they were taught in school when learning Canadian history. We reflected on the effect of presenting history this way and the ways the windows inform on as well as obscure the history of Montréal. For this special tour of the basilica, check out the Historia Nostra video “Commemorating French Canadian History at Notre Dame de Montréal.”