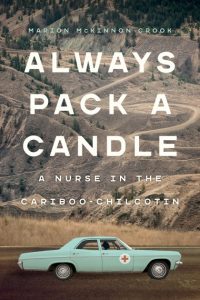 I’m one who believes that, at its core, history is about storytelling. Historians tell the stories of those who came before – and the best historians do so in a way that is both engaging and meaningful to the audience. For some, that has included telling their own stories and using their life experiences to illuminate larger trends and offer a window into specific times and places.

That is certainly the case with Marion McKinnon Crook‘s new book Always Pack a Candle: A Nurse in the Cariboo-Chilcotin. The book follows Marion in her first job after graduating university as a travelling nurse in northern British Columbia. Responsible for a 9,300-square kilometre area, Crook had to travel between communities, often navigating treacherous roads and struggling against a health system that allowed too many people to fall through the cracks. In telling her story, Crook highlights how she learned that she didn’t know everything, how she found systemic injustice, and how she managed her relationship with the provincial bureaucracy. A writer with many fiction titles to her name, Crook effectively employs a literary style that kept me engaged though the entire memoir.

In this episode of the History Slam, I talk with Marion McKinnon Crook about the book. We talk about her motivation for telling her story, her background in nursing, and the practical challenges of public health work. We also chat about the realities of working in such a vast area, systemic injustice in the health system, and what the challenges of dealing with skeptics of medical advancements in the 1960s can tell us about today.