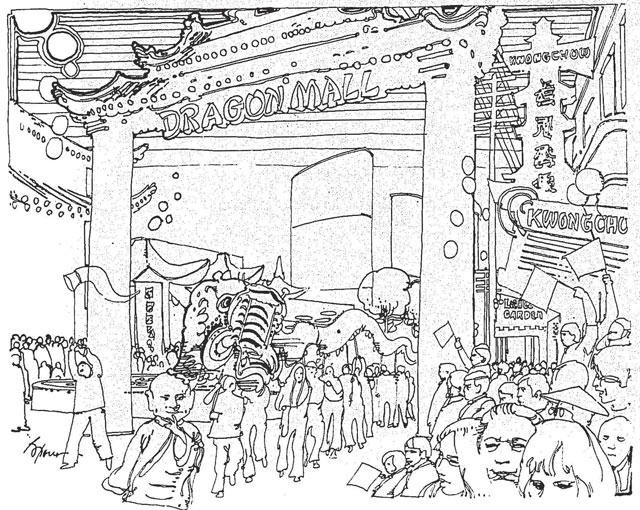 2021 has been a difficult year for Chinatowns across Canada. In mid-April, a coalition of community leaders from six cities released a statement calling on the federal government to make it a “national priority” to support Chinatowns struggling with the fallout of the COVID-19 lockdown and a new spike in anti-Asian racism. In both Montreal and Toronto, local activists are working to protect a heritage and community-centred vision of their districts from the twin pressures of redevelopment and gentrification. As these examples suggest, both the problems faced by inner city Chinatowns and the solutions proposed for meeting them intersect with many of the key urban and social debates of our time.

None of this should be a surprise to anyone familiar with the last century of North American urban history. Saving Chinatown has been on the urban agenda in cities across the continent since the mid-twentieth century, whether in the context of community fights against urban renewal and infrastructure projects, or the longer-term transformation from a racially segregated enclave to a commercial and cultural hub for a dispersed diasporic community. In this post, I present one minor episode in that longer history: the Dragon Mall, a street festival organized by Toronto’s Chinese community in the 1970s, amid widespread concern that the city’s Chinatown was on the brink of erasure. By looking at this event through three lenses—as an ethnic celebration, as part of the political mobilization of Chinese Torontonians, and as one path for renewing the heart of the city—I hope to highlight how in the 1970s, as today, debates over saving Chinatown were entangled with larger discussions of the urban future and the nature of Canadian society.

The Dragon Mall was an annual event that transformed Toronto’s Elizabeth Street—a north-south downtown street lined with Chinese restaurants and shops—into a car-free festival of Chinese Canadian culture. Visitors entered the street through a ceremonial gate, passing by ornamental fountains and telephone booths decorated as pagodas, temporary versions of the distinct architectural flourishes that have since the 1960s become immediately recognizable the world over as the “Chinatown aesthetic.” Food stands and restaurants offered variations on Chinese cuisine tailored to a Euro-Canadian audience, including chicken chop-suey burgers, pineapple with ginger, and Mongolian barbecued beef. Folk culture performances and demonstrations—Chinese dancing, calligraphy, watercolour printing—were juxtaposed with rock and jazz music and t-shirt vendors. The dragon, omnipresent motif of the festival, featured in street murals and decorations, and most visibly in the parade that followed a 60-foot paper mâché dragon from City Hall to Elizabeth Street on opening day. 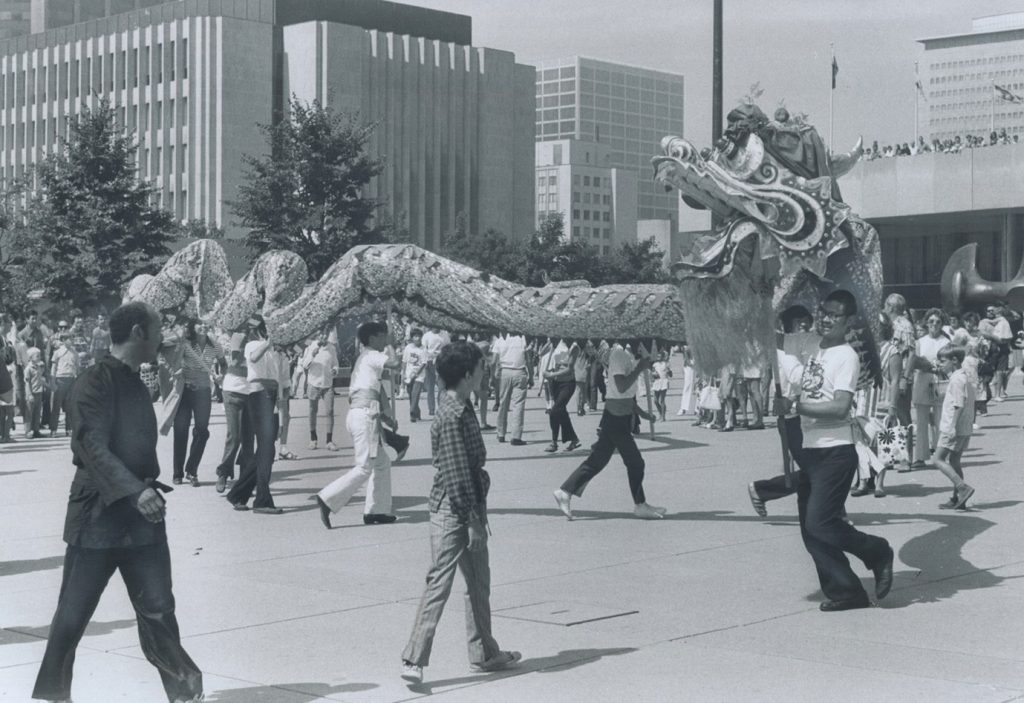 The opening ceremonies of the Dragon Mall in front of City Hall, 1971. TPL Toronto Star Collection.

The Chinese Canadian presence in Toronto had never been so visible. Today, the city hosts dozens of ethnic street festivals each summer, but in the early 1970s the Dragon Mall was one of a small number of pioneering public celebrations of Toronto’s emerging multicultural identity. By 1971 the city was the main destination for immigrants to Canada, with a population that was 44% foreign-born (although still overwhelmingly Euro-Canadian). As in other gateway cities, local ethnic associations and public institutions negotiated a growing place for cultural pluralism and performative multiculturalism in the city’s civic identity, often with the help of substantial financial support from the federal government. Neighbourhoods like Greektown and Little Italy began to use ethnic celebrations to develop as tourist and dining destinations, and from the late 1960s larger festivals, including the multi-ethnic Caravan and West Indian Caribana, became staples of Toronto’s summer cultural scene. While in 1971 the Dragon Mall was financed entirely by Chinatown businesses, in 1972 both the Ontario and Toronto governments sponsored the event, allowing for more elaborate temple structures and landscaping and a wider range of cultural programming. The hugely popular festival was also extended in length from nine days to over three months, amid calls that it be made a permanent feature of the downtown landscape. The only critics of the event were members of the Chinese Overseas Student Association at the University of Toronto, who found the festival’s reliance on an “archaic and misleading” version of Chinese culture (read: rickshaws and pagodas) out of step with the modernizing China of the 1970s. 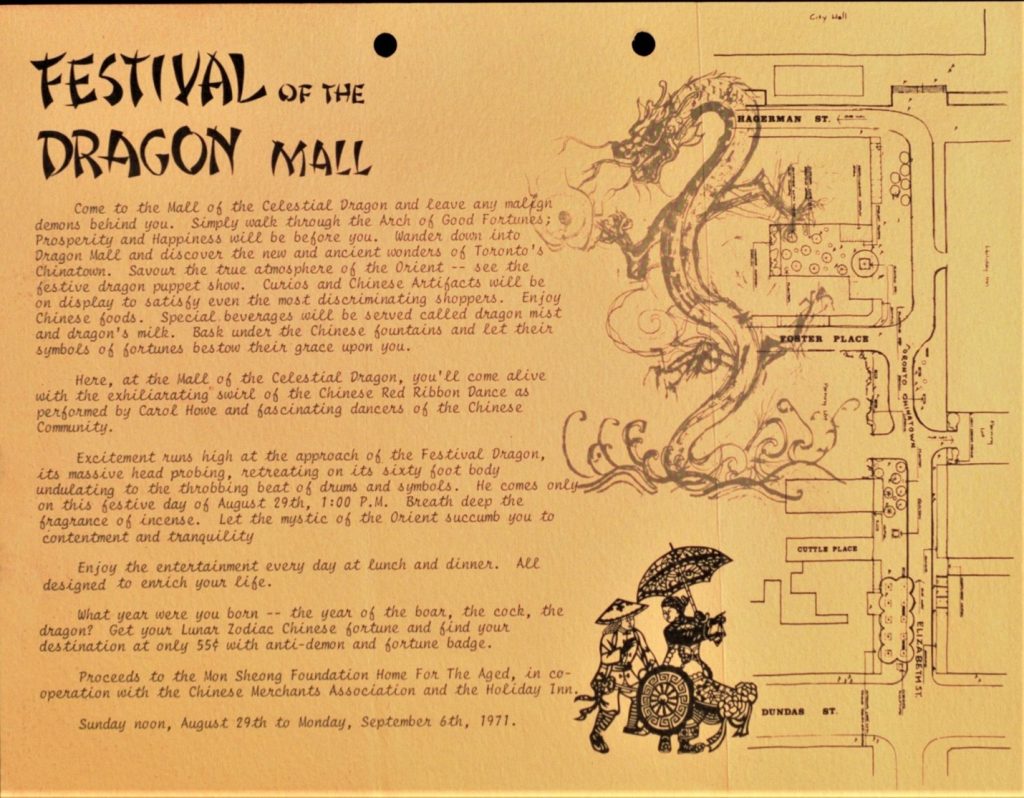 Leaflet for the Dragon Mall, 1971. City of Toronto Archives.

Promotional materials for the event highlighted its fun and festive atmosphere, but as one Toronto Star journalist pointed out, “there is serious work afoot at Dragon Mall.” For its organizers, the future of Chinatown was at stake. The mall was part of a larger pattern of political mobilization that, beginning in the 1960s, made Toronto’s Chinese community a small but significant actor in downtown politics. Centrally located, full of older structures, and occupied by a racialized population, Chinatowns across North America were targeted in the postwar decades for rebuilding, often under the auspices of urban renewal programs. In Toronto, the largest public renewal project of the era, the construction of a new City Hall (completed 1965), was made possible by the bulldozing of two-thirds of the city’s Chinatown, centred on Elizabeth Street. A few years later, a “Save Chinatown” campaign, spearheaded by local business owners and community activists—including restauranteur Jean Lumb—successfully resisted plans for further expropriations, although they continued to resurface throughout the 1970s. Around the same time, the city’s first Chinese Canadian politician, Ying Hope, was elected in the ward that included Chinatown. Both Lumb and Hope were key players in the Dragon Mall project, which presented to an appreciative public the Chinese community’s claims to both urban space and political voice in 1970s Toronto. The first claim—to a revitalized Elizabeth Street as the heart of the city’s Chinatown—would not last, in large part because residents and businesses were already moving west to cheaper, less constrained premises in the “new” Chinatown on and around Spadina Avenue, or in some cases further afield. But the place of business and community leaders like Lumb and Hope in the landscape of downtown politics would endure. 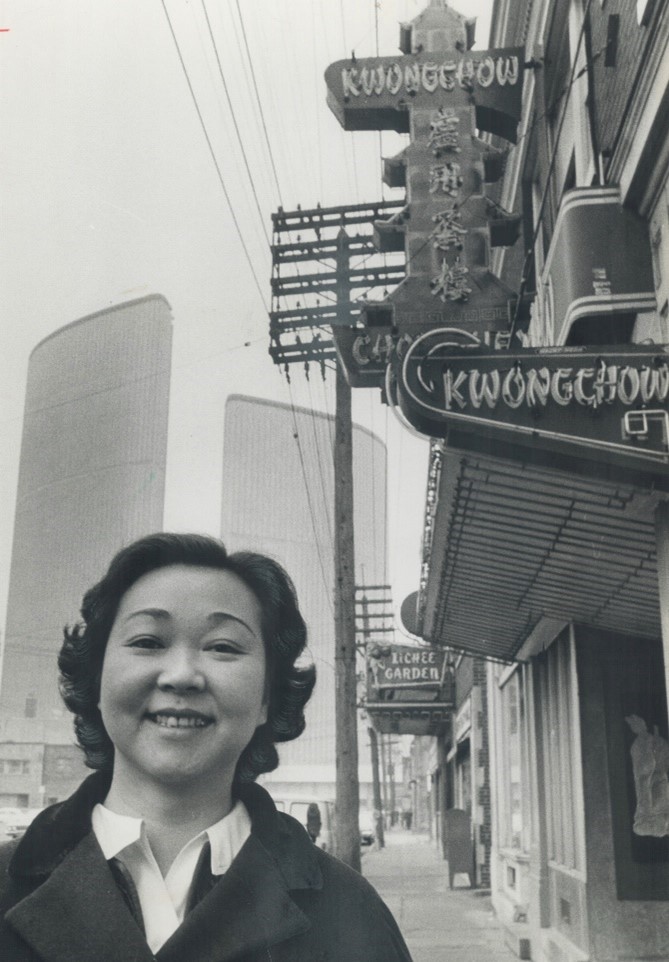 Jean Lumb in old Chinatown (and in the shadow of City Hall), 1967. TPL Toronto Star Collection.

Chinatown was not the only section of downtown Toronto that seemed in need of saving. Following a larger North American trend, from the 1950s onwards, the idea that renewal or revitalization was essential to the future of the city’s commercial core became gospel in the city. The main path for change was rebuilding, as suggested by the scale of the New City Hall project and the encouragement given to private landowners and major corporations to invest in building higher, denser, and more modern constructions. The Dragon Mall was one of a series of initiatives by downtown actors who did not see their aspirations or interests reflected in this largely elite vision. The event was directly inspired by the idea, first floated in 1963 and implemented the same summer as the first Dragon Mall, of pedestrianizing the nearby Yonge Street entertainment and retail strip. Making “people space” in a downtown increasingly dominated by tall buildings and the automobile appealed to small merchants and restaurant owners, who wanted to leverage public space to reverse their declining fortunes; it also appealed to urbanists and activists eager to promote alternative modes of transport and a more festive, human-scaled city. However, excitement for pedestrian malls did not last, and plans for a permanent car-free street in Chinatown—or on Yonge—were quietly shelved in the mid-1970s, even as downtown shopping centres (the pagoda-ed China Court in 1976; the Eaton Centre the following year) opened offering some of the same amenities, but in a controlled, privately managed indoor environment.

Does the Dragon Mall offer lessons for today’s struggles to define Chinatown’s future? The short answer is no; no simple ones, at least, particularly given the particular context of the COVID-19 pandemic. Current efforts to revitalize Canada’s Chinatowns as neighbourhoods, destinations, and community hubs will inevitably butt up against some of the larger structural challenges first identified in the second half of the twentieth century, including the suburbanization and fragmentation of the Chinese diaspora, dynamic downtown real estate markets, and changing consumer tastes. They will likely require both ethnic solidarity and strategic partnerships—something activists like Jean Lumb knew well—to achieve success. And whatever the strategies adopted, in most cities Chinatown’s spatial boundaries, economic functions, and cultural meanings will continue to evolve. For me as an urban historian, what the story of the Dragon Mall really highlights is that the stakes in this process are high, not just for Chinatown and the Chinese community, but for Canadian cities more broadly. For more than fifty years, saving Chinatown has been on the urban agenda, and that struggle, led by community members and their allies, has been tightly bound up in larger transformations in our cities and society. It has also contributed directly to shaping and resisting those transformations. As a result, today, as in the 1970s, it is difficult to imagine a future for downtowns in Canada that does not include Chinatown. As cities across Canada discuss how to restart central business districts largely abandoned during the pandemic, that is a history worth remembering.

Daniel Ross is a member of the Active History editorial collective and an assistant professor at UQAM, where he teaches and researches Canadian and urban history. His first book, on the history of efforts to revitalize and remake Toronto’s downtown in the twentieth century, will be published with UBC Press in Spring 2022.