This is the second in a series, “History En Vêlo,” about cycling and thinking historically, shared with NiCHE.

I am always looking for an excuse to ride a bike and work at the same time. During the extreme challenge of balancing work, parenting and exercise during COVID 19, I’ve done most of my “reading” while biking. Did you know Bathsheba Demuth’s exceptional Floating Coast: An Environmental History of the Bering Strait is available as an audiobook? Or Anne Lowenhaupt Tsing’s The Mushroom at the End of the World? You can also listen to classics by William Cronon, Stephen Pyne, and James Scott or best sellers by Andrea Wulf and Charles C. Mann. I’ve managed to bike my way through a lot of audiobooks in the past 18 months (there might have been a little nordic skiing in the mix, along with too many hours riding my bike on a trainer in my basement). Without audiobooks, I don’t know if I would have read any history books during COVID or been able to keep exercising without feeling guilty about all the work I was behind on. 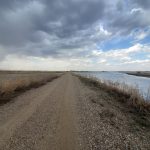 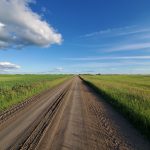 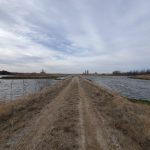 I’ve spent hours cycling on the gravel grid roads around Saskatoon, escaping to follow whales off the coast of Beringia, mushroom pickers in forests in Oregon and Japan, and Alexander von Humboldt as he summited mountains in the Andes. But, if I think back to the Before Times, when I used to travel outside of Canada for research in the UK, I have vague memories of using a bike to explore the landscapes shaped by the timber trade between Canada and Britain. I’ve biked extensively around London’s nineteenth-century suburbs, thinking about the forests along the Miramichi, Ottawa and Saguenay rivers contained within the brick-walled row houses. I’ve biked, walked, and jogged through the old docks in London, exploring the remnants of the Canada Docks Rotherhithe peninsula, where dockers unloaded most of the imported timber and sawn lumber in the nineteenth and early twentieth centuries. Unfortunately, redevelopment has not left many traces of the timber trade in South London. A trip to Scotland gave me the chance to explore a place still marked by the transfer of vast pine forest across the Atlantic.

Unlike the Canada Docks in London and Liverpool, the timber trade in the Clyde did develop in an enclosed dock near the centre of Glasgow. In fact, the timber trade on the Clyde looked a lot like the timber coves found in Quebec City. The timber was unloaded into the river from ships arriving from Canada, New Brunswick, Prussia or Russia and then formed into rafts and moved to one of the timber ponds for storage. Posts driven down into the riverbeds held floating timber in place. These timber ponds, as they were labelled on the Ordnance Survey maps, extended along the shores in Greenock and Port Glasgow and continued upriver for a number of kilometres. These were not the enclosed timber ponds found in London and other ports, that were built adjacent to the docks to store floating timber. Instead, they were holding pens, used to secure the timber as it floated along the Clyde’s riverbanks. The scale of these simple timber storage infrastructures provides a clear insight into the importance of imported timber to the Glasgow region. And the outlines of some of the coves can still be seen from space. When I found myself in Glasgow, I knew I needed to see them for myself.

I set out from Glasgow following a cycling route west towards Port Glasgow. Along the way, I caught the occasional glimpse of the Clyde estuary while biking through suburbs along the south banks of the river. After arriving in Port Glasgow, I needed to backtrack and find the park with views of the timber ponds. The public history display was vandalized and teenage kids were drinking in the park as I struggled to ride my rented road bike on rough trails. But after starting to worry I was not going to find the right location, I arrived and saw the remnants of the ponds. They were impressively large and knowing the use to extend further along the river helped me confirm the size and scale of the holding ponds and the timber trade.

Or maybe it just gave me an excuse to go for a bike ride and call it work.

Image credits: All photographs by the author.