By Louis Reed-Wood and Erin Isaac

In October 2021, three former University of Saskatchewan history nerds met up in Ottawa, Ontario to answer the call of destiny (or something like it…). We’d come to the outskirts of Ottawa to sleuth around the Diefenbunker: Canada’s Cold War Museum — a museum we three (Hannah Cooley, Louis Reed-Wood, and Erin Isaac, now all PhD students based in Ontario) had heard a lot about while working at the Diefenbaker Canada Centre (DCC), Canada’s only Prime Ministerial Library. The DCC, during our stint there, was oft confused with the Diefenbunker on tourism sites where contented visitors sometimes left glowing reviews for the Cold War museum on our own museum’s pages. Naturally, having heard so much about the Diefenbunker, we were eager to see what this museum has to offer. We were not disappointed. 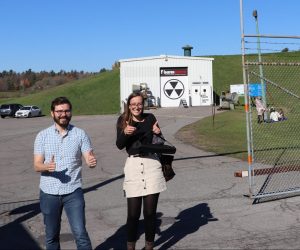 Erin and Louis hard at work!

The Diefenbunker was built between 1959-61 and was meant to house Canada’s government and key operations underground in the event of a nuclear attack. Top officials would have lived, worked, eaten, and had leisure time all within the bunker’s four storeys in the event of nuclear war. It even has a morgue. In 1994 it was decommissioned and transitioned into the museum visitors can explore today.

So this week on the Off-Campus History podcast and Historia Nostra, we’re asking “what makes the Diefenbunker so special?”

Louis is the host of Off-Campus History, a podcast focused on nonacademic portrayals of history. In each episode, he interviews another historian about one of these public-oriented representations—perhaps a museum or historic site, a theatrical production, or a game. On the show’s most recent episode, Louis has a conversation with Erin about our visit to the Diefenbunker and our impressions of how it represents the history of the Cold War. We also get some behind-the-scenes details about what goes into creating Historia Nostra!

In this month’s episode of Historia Nostra, we’re going behind the scenes with Diefenbunker Visitor Experience Manager Sean Campbell. We’re chatting about the bunker’s transition from an active military site into a museum and thinking about the stories that matter most when teaching Cold War history. The Diefenbunker is a preserved site, but it’s also continuously changing as its keepers seek to balance its role as a community institution and national historic site. Come along with Louis and I as we head underground to see what the museum currently offers and explore some of the ways this site is truly unique.

Off-Campus History is created and hosted by Louis Reed-Wood (PhD Candidate, University of Toronto). You can find the show on all the major podcast apps, or listen at  https://offcampushistory.podbean.com/. The show is also on Instagram and Facebook (both @offcampushistory). Get in touch by writing to offcampushistory@gmail.com; fellow historians are encouraged to reach out if they have a topic they’d like to discuss on a future episode!

The Diefenbunker: Canada’s Cold War Museum is a once-top secret, four-storey underground bunker, now a unique learning environment preserving and promoting Canada’s Cold War history. The museum and national historic site welcomes visitors to step into history and participate in award-winning programs, tours, events, and exhibitions. Visit the current Artist-in-Residence exhibition, Akìmazinàzowin | An Image of the Land, featuring the work of Algonquin artist Mairi Brascoupé. The exhibition is open until January 31, 2021, and admission is included with general admission to the Diefenbunker. Book your visit underground at https://diefenbunker.ca/ .