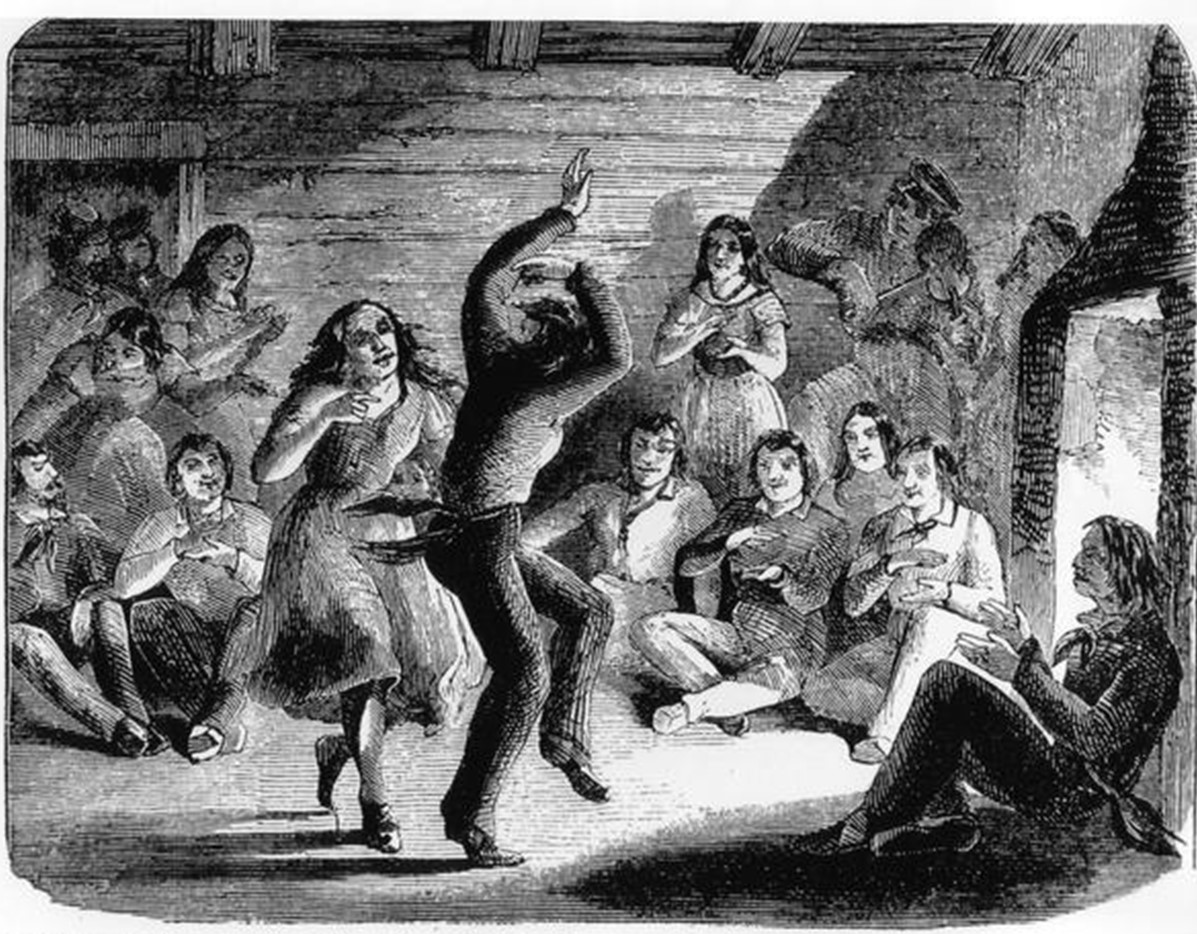 It is impossible to study early Canadian history without understanding the fur trade, and impossible to study the fur trade without coming across the records of the Hudson’s Bay Company. Some of the most useful and interesting records are the journals that kept daily accounts of post activities. Among the entries that jotted down the weather, visitors to the post, activities of the employees, and their general struggle for survival, one day of the year consistently stands out: New Year’s Day.

New Year’s Day was the most festive day of a trading year. It brought together post employees and their families, management, First Nations, retired traders, and sometimes even people from rival trading posts. The day was celebrated across the fur trade network at posts from James Bay to Vancouver Island. Like they did at Christmas, post employees had the day off from their usual duties. But the Christmas festivities usually paled in comparison to the raucous traditions of the first day of the New Year.

Many early fur traders came from Scotland, where elaborate Hogmanay celebrations on New Year’s Eve included gift-giving, feasting, and visits with family and friends. New Year’s was also a special time for the early voyageurs from France, who brought their traditions of gathering with kin and sharing food. As Indigenous families became involved, they brought their own touch to the event, and New Year’s celebrations at trading posts evolved into a unique set of traditions.[1] These New Year’s traditions persisted long after the fur trade ended, inspiring the public “levees” held by Manitoba’s Lieutenant Governors, and Métis New Year’s traditions that continue today.[2]

Fur trade New Year’s traditions were in place by the late 1700s, when North West Company traders travelling through Athabasca recorded celebrating “the usual custom.” On January 1, 1793, famed explorer Sir Alexander Mackenzie wrote that his “people awoke [him] at the break of day with the discharge of fire-arms, with which they congratulated the appearance of the new year. In return, they were treated with plenty of spirits, and when there is any flour, cakes are always added to their regales, which was the case, on the present occasion.”[3]

Mackenzie had outlined the basic structure of New Year’s celebrations that was adopted at trading posts throughout Canada. The people of the post woke up at dawn to welcome the New Year. During the day they visited the Postmaster or Factor (who oversaw the post) and received food and drinks to enjoy on their day off.

If it was a large, wealthy post, the daytime festivities tended to be more formal. At Michipicoten in 1831, the post servants honoured Chief Factor George Keith with a military salute before being welcomed into his house for “several Glasses of Liquor (a mixture of Whiskey & Brandy) and a due proportion of Flour cakes.”[4] The Métis and First Nations wives and daughters of the voyageurs were included in the festivities too. After the men left, satisfied with their share of cakes and liquor, the “Ladies next came and made their curtsies and being introduced to the family apartment were treated in the best possible manner.”[5] Keith was less generous with the First Nations hunters who showed up at Michipicoten that day, but still gave them small portions of food and drinks to share with their families. Keith tried to discourage the First Nations who called on him from joining the festivities because he thought they were “at risk of neglecting their more necessary and becoming pursuits,” like trapping fur-bearing animals to sell to the post.

After the day’s events, the celebrations continued into the evening when there was usually a party with dancing and fiddle music. It was a time for all the people at the post to come together. As Mattawa’s Postmaster Colin Rankin wrote in his personal journal in 1850, “the drinking began with a Vengeance, old and young, Married & Single, he and she.”[6] Liquor continued to flow, though there were limits on how much the Hudson’s Bay Company could sell to its employees in the later years of the fur trade.[7]

Sometimes the parties got out of hand and exposed rifts between the people of the post, like at Moose Factory in 1859, when tensions between Métis and Norwegian post workers culminated in a brawl.[8] There were seventeen Norwegians at Moose Factory that winter, many of whom apparently did not get along with their Métis coworkers. They all partied together in the carpenter’s shed on New Year’s Day, but by 7 p.m. there was a “serious disturbance” between the two groups that resulted in the Norwegians hiding in the barracks, three or four of them “badly cut.” The fight allegedly started because Métis women refused to dance with them.[9] Some of the Norwegians were so upset that they refused to work after the party, choosing to abandon their contracts and return home in the following months. This was a memorable New Year’s: over 100 years later, Métis around Moose Factory could recall the stories of their grandfathers and great-grandfathers standing up to the Norwegians on New Year’s Day.[10]

The New Year’s Day party tended to go late into the night, and the people of the post were often in no condition to work the next day. The more generous postmasters let them recover on January 2 before returning to their usual duties the following day. Sometimes one day wasn’t enough. In 1838, Fort William’s Chief Factor Donald McIntosh allowed his men an extra day off on January 3 to “repose themselves after their Bousing in order that the Fumes of the liquids they swallowed might evaporate.”[11] Although life at a trading post was difficult – or perhaps because of it – the people who lived there knew how to throw a good party.

Jessica Di Laurenzio is a Historical Researcher at Know History, a historical consulting firm in Ottawa, Ontario, where she specializes in archival research for Ontario Métis projects. Jessica holds an M.A. in Public History from Western University.

[7] After the HBC merged with the North West Company in 1821, HBC leadership started to minimize liquor sales to First Nations. In 1837 the HBC ordered “That Liquor be not made an article of trade or medium of barter with Indians for furs in any part of the Country and that not more than 2 Gallons of spirituous Liquor and 4 Gallons Wine be sold at the Depots to any individual in the Company’s service of what rank soever he may be.” Hudson’s Bay Company Council Minutes, 1837. Printed in The Canadian North-west: its early development and legislative records Vol. II, ed. E.H. Oliver (Ottawa: 1914), 772. Liquor sales were completely prohibited in the “North-West Territories” in 1875 as part of the North-West Territories Act, which would have impacted New Years Day festivities across most of Northern Ontario and the northern Prairies. “North-West Territories Act,” The Canadian Encyclopedia, https://www.thecanadianencyclopedia.ca/en/article/north-west-territories-act.