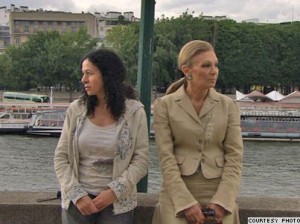 The Queen and I (2008), directed and produced by Swedish-Iranian filmmaker Nahid Persson Sarvestani, follows the former Empress of Iran, Farah Pahlavi and Sarvestani as they discuss their life stories following the 1979 Iranian Revolution. These two women are unlikely confidants; Sarvestani is a former communist who participated in the Revolution in her youth; Pahlavi is the widow of Mohammad Reza Pahlavi, the last Shah of Iran. The documentary draws you in right from the beginning.

In 1979, the Iranian monarchy (the Pahlavi dynasty) was overthrown and was replaced by an Islamic Republic led by Ayattolah Ruholla Khomeini. The royal family chose to flee Iran and Farah Pahlavi lives in exile to this day. Following the revolution, Khomeini was quick to silence those who did not support his regime. Like the royal family, Sarvestani and her family struggled following the revolution. They were targeted as communists and escaped the country in order to survive. They eventually made it to Sweden after living underground for several years.

Sarvestani tells us that she was enchanted by Pahlavi in her youth and watched Pahlavi’s fairy-tale-life unfold through television and magazines. Sarvestani’s reality was much different; growing up, her family was poor and her father was very ill. Her mother had to weave carpet in the family home to make ends meet for her eight children. Sarvestani began to hear about the tyranny and oppression under the Shah’s rule and eventually participated in the revolution with her brothers. Almost 30 years later she wants to make a film about Farah Pahlavi and her life since the revolution. The focus of the film shifts after the two women develop an unexpected friendship.

Viewers sense the interpersonal tension between the women right from the beginning of the film, as we watch Sarvestani waiting impatiently in Pahlavi’s lavish Parisian living room. She is meeting the former Queen for the very first time. Sarvestani is dressed casually, in jeans. “What would you like to be called?” she asks Pahlavi. “You may call me your Majesty,” Pahlavi replies. When narrating the film Sarvestani refers to Pahlavi by her first name, “Farah.”

Sarvestani is in search of answers. What was Farah’s life like after the revolution? How could she love the Shah, a man who had caused so much suffering to Iranians? The viewer is taken on her personal journey into the private and exclusive world of the former Queen of Iran. On the 29th anniversary of the revolution, Pahlavi and Sarvestani sit together in the same room as Pahlavi tends to her correspondence. “How ironic that we are sitting in the same room together, the Queen and someone who fought to remove her from her power,” Sarvestani remarks.

In the end both women come to an understanding as they open up and share intimate details of their lives with each other. Sarvestani finally asks Pahlavi the more difficult questions about the Shah’s oppressive government, questions she was uncomfortable asking during the beginning of the film. Pahlavi’s answers are surprisingly honest.

By the end of the film I fell in love with the elegant Pahlavi who, despite her involvement with the Shah, appears to be remorseful and deeply concerned over the situation in Iran. At first she is very uncomfortable and weary of Sarvestani and her film. She questions Sarvestani’s motives for making the documentary and the film is called off a few times after Sarvestani’s communist past is uncovered.

In my opinion, Sarvestani does a good job of maintaining objectivity throughout the film. The film shifts back and forth through time; from the Revolution; to Pahlavi’s engagement and marriage to the Shah; to Sarvestani’s stories of escape and survival, and so on. I enjoy that the narrative is not chronological. The past is deeply entwined in their current lives and the filmmaker does an excellent job of illustrating this. The women are always living in the shadow of the revolution.

This is a touching story about two women from very different worlds sharing stories of exile. Following the revolution both suffered the loss of loved ones and both can never safely return to their homeland. Underneath their political and ideological differences lies a common longing for Iran. Both desire change, and both share hope for the future of their country. Their lives share the same past, although their stories play out from very different forms. They are citizens of the world, together in exile.