If you have an everyday place that has helped you to engage with the past more deeply or more critically, send an e-mail to tspeace[at]gmail.com and I will add it to this post. 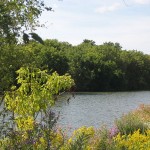 Place: East Dundas and the Desjardins Canal – Hamilton, ON
What about this place opened your eyes to the past: For a short time, before the railway boomed, the Desjardins Canal brought ships from Lake Ontario into Dundas Ontario.  Today, the canal has silted up and the space has become a wetland known as Cootes’ Paradise.  The canal, and the trails around it, tells much of this community’s history.  The canal ends where one of Ontario’s first roads begins (built on a well-established Aboriginal portage between Lakes Ontario, Erie and St. Clair).  The community was well situated to be one of Ontario’s key transit points and a booming industrial hub.  Instead, however, it developed into a small town and is a (relatively) small suburb of the City of Hamilton.  In a province dominated by large cities, the canal, and Dundas itself, is a good reminder of the failed promises of the past.  It challenges us to think about the environmental, technological, social and cultural reasons why this community did not develop like its much larger eastern neighbours. 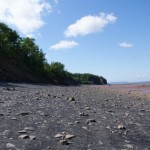 Place: Blue Beach – Hantsport, NS
What about this place opened your eyes to the past: There are many rocky beaches in Nova Scotia, and it can be fascinating to dig amongst those rocks to find different ‘gems’ – seashells of all shapes and sizes, and many types of stones like agate, amethyst and quartz.  What is even more fascinating, but not always visible right away, is finding layers of shale, or some other stone, and seeing within those layers the imprint of an ancient creature which has been solidified in that stone for millions of years.  It’s a history that goes back well beyond any human impact, a time when nature itself was the only influence.  People can look at these fossils and layers of rock to determine various things about the past, like what a particular climate was like and for how long.  Humans have come up with many ways of recording the past, but nothing seems to record the past so concretely as something that has been solidified in stone for such a long time.  And although they do not have specific details that come with them, these stone records can provide a lot of information about the earth’s past, how it evolved into what it is today, and how it may change in the future. 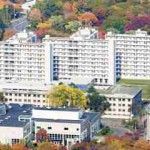 Place: Université Laval – Québec, QC
What about this place opened your eyes to the past: Although there are many wonderful historical sites in the area around Quebec City, it is the campus of Université Laval that helped me to best understand the history of New France.  From atop the campus residences, you can see why Quebec was chosen to be the centre of France’s seventeenth and eighteenth century colony.  At Quebec, Atlantic and Great Lakes geography meet.  To the east, the St. Lawrence widens and steep mountains rise as the river flows towards the ocean; to the west, the St. Lawrence narrows significantly and the landscape flattens and becomes more pastoral.  From this vantage point, it is not only possible to see the town’s strategic location, but also how it was suited to support most elements of the colony’s economy (fishing, trading and agriculture).