This is my favourite time of the year to be in Quebec City.  With the school year drawing to a close, a seemingly endless train of tour buses bear down on the city. Ontario’s youth are here to learn about Canada’s roots in the berceau of the nation. Our story starts here… or at least so the tale goes. Sitting at my hotel-room desk in Quebec – straddled between two days of national celebration – I can’t help but consider the stories we use to describe who we are and where we have been as a country.

On Sunday Canadians will celebrate another one of Canada’s beginnings: the 145thanniversary of Confederation. Indeed, Canada Day, and the confederation it marks, is only one of many events used to encourage Canadians to remember our collective roots. Only a few short years ago, for example, we celebrated the founding of Canada during the Acadian and Quebec quatercentenary. Currently, we are planning to celebrate the birth of ‘our nation’ during the War of 1812. And in the not too distant future, we’ll have an opportunity to toot our horns during Sir John A.’s bicentenary. 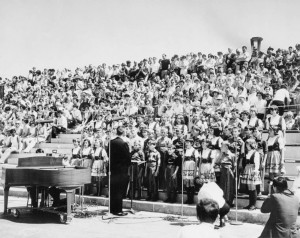 Each of these moments fits within a well-trod trajectory of Canadian nation building. From the arrival of Europeans to the formation of the United States to the creation of Canada and some of ‘our’ first acts as a nation, this narrative points us to an ever enlightening future that is embodied by a dominant central government and often populated by ahistorical and homogenous ‘French’ or ‘English’ Canadians.

In this popular use of the past, events with considerably different historical contexts are situated on a path that inevitably leads to nationhood. Men like Samuel de Champlain and Isaac Brock are transformed from individuals working for competing crowns (and alongside many others) into heroic Canadians single handedly building a democratic nation-state. First Nations’ migrations during the seventeenth and eighteenth centuries (like that of the Wendat to the north shore of the St. Lawrence River or the Haudenosaunee to the Grand River) become events that ‘we’ (as Canadians) allowed and directed, despite the French and British empires having only a marginal presence in these areas at the time.

Don’t get me wrong. There is both merit and some truth to Canada’s national narrative as it is often celebrated. There have been some great figures and pivotal events in Canada’s past (both Champlain and Confederation fit this bill). But my point here is that these ‘great’ moments and people, who are often chosen by the political elite for narrow and often partisan purposes, can obscure other ways of telling stories about Canada.

Seldom do we remember, for example, that on the first Canada Day, many Nova Scotians mourned their union with the Canadian colonies. Well into the twentieth century, some people continued to fly their flags at half-mast on July 1st as a testimony to their displeasure. For the people who actually lived through the event, today’s popular narrative about a positive founding moment in 1867 would be hardly recognizable. In fact, Canada Day itself was only sporadically celebrated until after the Second World War, as most (white and English) residents sought to fête the British Empire instead.

Perhaps even more to the point, many groups of people important to the country’s social and cultural fabric did not participate or support the events used to bolster our national historical consciousness. For no group is this more evident than for First Nations people. Although scholars like John Ralston Saul (and others) have sought to change this, First Nations are rarely included in the key events in our national narrative. Although often present at – and almost always deeply affected by – these historical events, their perspective is seldom included in our collective remembrances (though this is changing). For some First Nations people, many of whom are still struggling with our country’s continuing colonial legacy, this is because the arrival of Europeans in North America and even Canadian Confederation are events to lament rather than celebrate.

These two examples, of course, are just as important for understanding Canada’s past as those we celebrate. But all too often these types of stories are forgotten. Or, worse, they get deliberately ignored because of their political consequences. In our current and future heritage related celebrations, we need to be certain that our zeal for a positive message does not eclipse the less savory aspects of Canada’s past nor reduce the historical rigor with which it is approached. This is all the more important in this era of austerity, where access to our national archives and archaeological collections is currently being drastically reduced.

Thomas Peace is an editor with ActiveHistory.ca and a SSHRC postdoctoral fellow in Native American Studies at Dartmouth College.