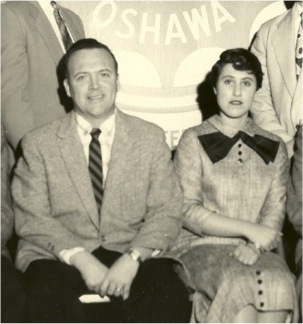 Sometimes ordinary people can do extraordinary things. I had the pleasure of witnessing an example of this recently when I attended a tribute luncheon in honour of the 23rd annual Agnes Macphail Award winner, Beverly McCloskey.

Agnes Macphail was the first woman in Canada elected to the House of Commons and first woman sworn into the Legislative Assembly of Ontario where she played a leading role in passing Ontario’s first equal pay legislation in 1951.

Despite this first legislative step, it was still legal in Ontario to employ “girls” in segregated workspaces, enforce separate seniority lists for men and women, and to negotiate very unequal collective agreements on their behalf. For a group of seven women from UAW Local 222 in Oshawa who were capable of doing the same jobs as their male coworkers, this was grossly unfair. More importantly, they set out to change it.

In 1962, the Ontario Human Rights Code barred discrimination on the basis of colour, race, creed, and national origin, but did not include sex. In 1969, members of the newly formed UAW Local 222 Women’s Committee approached their NDP MPP, Cliff Pilkey, convincing him to present a bill outlawing sexual discrimination in employment. Following a lengthy year and a half of lobbying, building coalitions and much protest, Bill 83, “An Act to Prevent Discrimination in Employment because of Sex or Marital Status,” passed into law, leading to the amendment of the Human Rights Code in Ontario to include sex.

Bev McCloskey, a trailblazer among the seven women who lead this challenge, will be among the first to point out that legal changes only grant a small foothold in our much larger uphill battle. Bill 83 is just one achievement in a much larger, ongoing struggle that she has spent a lifetime fighting.

Bev began working at General Motors in 1949 when she was 20 years old. A 22-day-long wildcat strike that year was her first experience with the union, where she learnt to play Euchre while picketing at Gate 8 of the North Plant; she has remained a steadfast union and social activist ever since. She has continuously held a number of elected positions through her years of employment at GM: committeeperson, alternate committeeperson, acting district committeeperson, along with her work on many standing committees.

She served on the Executive Board of UAW Local 222 for 17 years as Recording Secretary, the only executive position a predominantly male membership would allow a woman to hold at the time. Bev calls it the “best job going,” however, and keenly points out that it was a position that could also carry great power. For example, the wording of motions is an important task that falls largely upon the secretary.

Bev was first exposed to the new and radical idea of a “women’s committee” as a UAW Convention Delegate. Upon returning to Canada, she actively began signing women up, forming the first women’s committee in the Canadian Region of the UAW in September of 1968. They could have began by fighting for sexual equality in their own unionized workplace, but they wanted all women to benefit rather than just those in their union, so they were soon lobbying for legislative reform in the province.

Long retired from the job, but never the fight, Bev has continued her social activism in her city. She remains highly active politically and socially, organizing line dancing, tai chi, yoga, casino trips, and a dizzying array of buses to protests. She is a founding member of the Durham Region Unemployed Help Centre and Sunrise Seniors Place, and sits on their Boards. She is also an esteemed Friend of the Second Marsh, working to conserve Oshawa’s waterfront. A vegan, environmentalist, social activist and political dynamo, she continues to work exhaustlessly to achieve greater justice and equality.

Women continue to face many barriers to full equality. Simply recognizing the actions of women like Bev McCloskey will not change this. But she can also offer us inspiration. With a lot of will, determination, and a little help from friends, sometimes ordinary people can do extraordinary things.

Christine McLaughlin is an editor at ActiveHistory.ca and a PhD Candidate at York University.