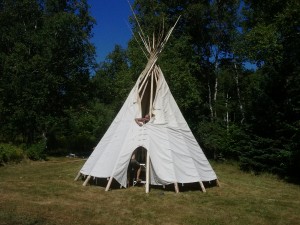 Constructing a tipi at the Home Again 2012 reunion. Photo by the author.

One of the defining countercultural phenomena of the 1970s was the back-to-the-land movement. During this period, tens – maybe hundreds – of thousands of North Americans abandoned their urban dwellings for a rural lifestyle. This movement, which eschewed the postwar consumer culture, brought thousands of people “from away” to Prince Edward Island. Some stayed a few weeks; others a few seasons. Some never left.

This past weekend saw roughly one hundred members of the Prince Edward Island back-to-the-land community assemble in Mount Vernon for the Home Again 2012 reunion. Over the course of three days those gathered shared stories about the idealistic abandonment of cities in favour of the Island countryside, the building of homes, and surviving the first winter. There was art, music, and incredible food. (The menu included brick oven pizza, curried mussels, seafood chowder, and roasted pig.)

Alan MacEachern and I have been researching the history of the Island’s back-to-the-land community for several years. “Back to the Island,” a digital exhibit featuring some of our earlier research, was launched in 2009. Since then we’ve continued to conduct interviews with back-to-the-landers. The Home Again organizers were kind enough to extend an invitation to us to continue our work during their event, enabling us to conduct additional interviews and expand our understanding of the topic. I was also given the opportunity to lead a group discussion with children of back-to-the-landers – or the “Children of the Hummus,” as Alan and I like to say – regarding their experience. That this discussion was held inside a large tipi, specially constructed for this event, made it even more memorable.

Alan and I were not the only academics at work during this event. Amish Morrell, an instructor at the University of Toronto Mississauga’s Department of Visual Studies, and Pan Wendt, curator at the Confederation Centre of the Arts’ Art Gallery, led a two hour walk showcasing the architecture of homes built by local back-to-the-landers. For me, this walk was one of the highlights of the weekend.

All of this raises a question: what is the role of academics – and historians more specifically – at such gatherings? It seems to me that many reunions could benefit from the inclusion of an oral history component. The presence of an individual trained in the art of oral history would be an ideal for capturing stories. By “trained” I hasten to note that I do not necessarily mean a historian with a PhD. A historically-attuned family member could do a great job recording stories at a family reunion. With the advent of computer software such as Omeka, building an online history exhibit, complete with oral interviews, has never been easier.

Do you have any reunions on your agenda? Between your schooling, family, and social circles, odds are you do. If you think those gathered might have some interesting or insightful stories to share, perhaps you can turn it into an oral history project.