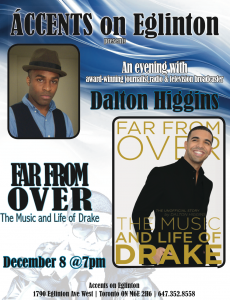 Click through for a PDF version of the poster.

On Saturday December 8th at 7pm, please join Accents on Eglinton and host Francesca D’Amico (York University PhD candidate in music history) for an evening with Dalton Higgins, award-winning journalist, radio and TV broadcaster, to discuss his latest book Far From Over: The Music and Life of Drake (ECW Press). Higgins and D’Amico will engage in a conversation intended to use the life and music of Drake as a lens by which to discuss and highlight how the historical meets the contemporary. The issues that will be under discussion will include: the history of urban music in Toronto in particular, and Canada at large; race and ethnicity (given that Drake is of Jewish and African American descent, born and raised largely in Toronto, and has spent the ocasional summer in Memphis, TN prior to signing with his American record label); the role of media and industry; music and technology; and the current state of Hip Hop, Canadian culture and Canadian cultural icons as exports in a global market.

Far From Over is the first biography of the platinum-selling hip-hop artist; it examines Drake’s transition from Aubrey Drake Graham, heartthrob Canadian actor on the hit show Degrassi, to Hip Hop emcee. Featuring original interviews and insights surrounding the history of Canada’s Hip Hop scene, technology, social media and the music industry, and detailing the social and cultural conditions in Toronto that helped create the Drake phenomenon, Far From Over reveals the still unfolding story of an artist whose star continues to rise.