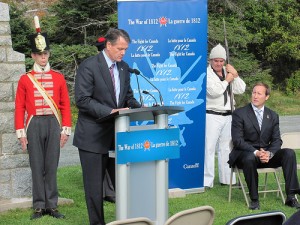 “Canada’s history is worth emphasizing,” according to a recent pathetically inoffensive editorial headline in the Globe and Mail. Such an argument is so bland and broad as to be almost entirely pointless. What drove the editorial team at the Globe to boldly stick its neck out with such a feeble statement? The temerity of the Leader of the Official Opposition, Thomas Mulcair, and his critique of the federal government for its use of historical commemorative events as “political branding” and a form of “jingoism.” “If it is an act of “jingoism” to commemorate such events, or to mark the bicentennial of the War of 1812,” according to the Globe, “then let’s have more of it. These are critical opportunities to educate Canadians about their history and thereby enhance their identity.” In short, more Canadian history means more better!

How can one criticize a government for devoting resources to raise awareness of Canadian history? As James Carville might say, “It’s the emphasis, stupid.” What history is worth emphasizing and how should it be emphasized? Whose stories do we tell and how do we tell them? These questions actually matter. To historians and public history professionals these questions are obvious and basic. By implication, the Globe and its sympathetic readers, argue that any effort to place emphasis on any aspect of the past is a good thing. It is simply a “wise recognition of the need to celebrate Canadian identity.” The argument is either ignorantly oblivious to the significance and political weight of public commemoration or it is dishonest. Either way, it is embarrassing to see in print.

The “more Canadian history, more better” argument, of course, lies at the heart of the controversy over the proposed changes to the Canadian Museum of Civilization. Who could possibly object to the creation of a  Canadian Museum of History? Is it not inherently a good thing? As some of the staff at the Canadian Museum for Human Rights recently discovered, emphasis and selection in historical commemoration is not a politically neutral act. By placing emphasis on the commemoration of wars and political “fathers,” the federal government has made deliberate statements about Canadian identity, statements that exclude and omit other aspects of Canadian history, including the 1763 Royal Proclamation and the 1982 Constitution Act and Charter of Rights and Freedoms.

The money also matters. Where the government spends its money shapes its representations of Canadian history. The federal government has not simply poured more money into Canadian history evenly across the board. It has selectively diverted money away from arms-length research institutions, including Library and Archives Canada and the Social Sciences and Humanities Research Council of Canada, and shifted it toward special commemorative funds and other limited-term projects under direct ministerial control. The War of 1812 Commemoration Fund changed the traditional funding structure for federally funded historical research. Typically, historical researchers would apply to the Social Sciences and Humanities Research Council of Canada, an independent government research agency, for such funds. Panels of expert researchers adjudicate applications to SSHRC and other federal research agencies. War of 1812 Commemoration Fund applications are reviewed by the federal secretariat, a political branch of government connected to Treasury Board and Canadian Heritage. The federal government’s changes to the funding of historical research in Canada have moved money from branches of government outside the political reach of cabinet to those directly under the control of Ministers of the Crown.

Canada’s history is worth emphasizing, but the important choices of emphasis should not be left in the hands of those with a direct political stake in reshaping the meaning of Canadian identity. Canada’s history is also worth supporting beyond commemorative events and celebrations. Our archives, libraries, and other research institutions are vital to the ability of Canadians to know their collective pasts and to tell our own stories. Without support for Library and Archives Canada and the Social Sciences and Humanities Research Council of Canada, Canadians will become culturally impoverished and limited in their knowledge of the past. More Canadian history is not inherently a good thing.