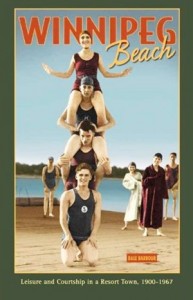 Dale Barbour’s Winnipeg Beach: Leisure and Courtship in a Resort Town, 1900–1967 chronicles the rise and fall of a Manitoba resort community. Not only does Barbour craft a history of Winnipeg Beach, he explores how ideas of public dating influenced the resort’s growth and popularity. Established at the turn of the twentieth century, Winnipeg Beach was marketed by the Canadian Pacific Railway (CPR) as a summer resort community, and its popularity continued to be intimately tied to that of the railway. Despite advertising aimed at the upper classes, Winnipeg quickly became the vacation destination for Canadians of various backgrounds. As its popularity with the working classes rose, the CPR shifted its marketing of Winnipeg Beach specifically to young men and women as the ideal location to meet someone special in the countryside. At its peak popularity, the beach was the go-to meeting place for young Winnipeggers.

Barbour spends a considerable amount of time demonstrating how Winnipeg Beach emerged as the premier location for young adults eighteen to thirty years old, along with why the transition from private courtship to public dating made the beach such a popular destination. The specially designed boardwalk, amusement area, and dance hall allowed young adults a safe, comfortable, and, above all else, fun location to mix and mingle with members of the opposite sex. Barbour argues that from the 1920s to the 1940s, the public areas in and around the boardwalk afforded a degree of privacy, but not enough to cause a moral panic. In this setting, young adults could gather, yet still remain under the watchful eye of society. Nevertheless, a moral panic concerning youth culture in the 1950s and 1960s, along with the shift from trains to cars as more popular mode of transportation, contributed to the decline of Winnipeg Beach. As Barbour explains, a busy train could deposit 1,600 people at a time on the boardwalk, and the excitement of an arriving train brought a buzz of activity to the beach. By 1961, however, regular passenger service to Winnipeg Beach was cancelled.

Barbour has created a well-written and -researched history of Winnipeg Beach that is accessible to all interested readers. He outlines his arguments in the introduction in a straightforward manner, and provides the reader a clear path to follow. Barbour uses each chapter to build upon the foundation laid out in the introduction, adding additional detail to his narrative. However, while a certain amount of repetition is expected and welcomed in an account such as this, I was surprised by the degree of restatement of certain information. Chapters often feel like they were designed to be stand-alone articles, as many subjects are re-examined in detail without adding significantly to the argument. This unfortunate redundancy makes the work feel longer than necessary and may distract the reader from the merits of Barbour’s arguments.

As I read, I was certainly able to piece together a clear picture of Winnipeg Beach. Barbour effectively discusses the initial establishment of the resort and details the role that the CPR played in its formation. I do think this book would have benefited from the use of a map or two to better contextualize the location of Winnipeg Beach in this area of Manitoba. He discusses other resorts in the region, but without a map it is difficult to imagine how Grand Beach or Victoria Beach might have served as competition. Barbour also could have made better use of the photographs found throughout the book. I found it curious that a photo of the Empress Hotel, with a caption mentioning its well-known bar, is found amongst a discussion of the experiences of various ethnicities at the beach, rather than with the details of the hotel in the text. Similarly, an advertisement from 1920 is discussed at some length on page 33, yet a reproduction of the advertisement itself is found three pages later. These are but two examples of odd layout choices that make the book feel jumbled and unorganized at times.

Despite these shortcomings, Barbour has crafted a very readable history of Winnipeg Beach that illustrates well the type of summer-time fun that this area provided for countless people throughout much of the twentieth century.

Ruthann Lablance is a public historian and Manager of Digitization at the Ontario Genealogical Society. She holds an M.A. in Public History from the University of Western Ontario.

One thought on “Trunks & Trains: Summers at Winnipeg Beach”