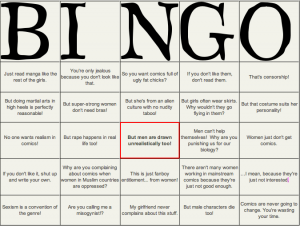 When I ask my students who identifies as a feminist, usually only a few hesitantly raise their hands. I appreciate their reluctance to label themselves. As Ruth Rosen aptly illustrates in a recent article, feminism has been forcefully infused with negative connotations. Students of women’s history learn how cartoons and other forms of humour have been a key means of demonizing suffragists and feminists, reinforcing negative perceptions of women seeking equal rights.

My focus here is on one tool for maintaining a language of masculine empowerment and feminine and racist oppression: the joke. Uh-oh! Here we go! Another “man-hating,” “over-reacting” “feminazi” who “can’t take a joke.” On the contrary, I love a good joke. But I believe that good jokes should be funny to everyone in the room, not just a historically privileged group. I think good jokes should not make anyone feel demeaned, afraid, hurt or like lesser of a human being.  This is not just a personal opinion; many human rights’ codes clearly define jokes about historically oppressed groups as harassment.

My sensitivity to the power of a joke was first realized when I attended a talk by a Holocaust survivor.  For him, a cultural climate that allowed for the mass extermination of an entire religious group had been paved by stereotypes; these were in turn powerfully reinforced by “jokes.” In his great wisdom, he did not just teach us how this oppressed his own group, but how it continues to oppress many groups – he finished his talk by asking us to think twice the next time we were going to make a “Newfie” joke.

Having grown up in Nova Scotia, I was exposed to more than my fair share of jokes about people from Newfoundland from a very young age. It wasn’t until I moved to Ontario and started being called a “Newfie” that these “jokes” assumed a new meaning. All “Newfie” jokes are organized around one central theme: stupidity. When I told these jokes as a Nova Scotian, I was empowered by them – next to the “silly” Newfoundlander, I was clearly more intelligent and superior. My ability to “get” and reproduce the joke further reinforced my own sense of intelligence and power. Once I became the target of these jokes, however, their meaning changed – they became very disempowering. What’s so funny about being made to feel stupid? Yet, if I didn’t laugh at these jokes, I simply reinforced the stereotypes they produced, illustrating that I just didn’t “get” the joke because I wasn’t smart enough to understand it.

Jokes about women, as with all marginalized and oppressed groups, are rooted in their historical oppression. Women were one of many marginalized groups in Canadian history denied access to formal education, barred entry into the professions, and restricted from even voting, let alone holding public office. This surely forged an environment rife for jokes about women’s stupidity, incompetence, “inability” to make a decision or speak for herself, and her perpetual wallet-grasping. Deny her access to paid employment or pay her less than a man for the same work, and then mock her for her dependence on a man’s wallet. This is how institutionalized sexism and individual sexism have mutually reinforced each other.

Institutionalized sexism has been chipped away in Canada. Individual sexism and racism are officially frowned on, but sexist and racist statements are reproduced daily. Few will label themselves as sexist or racist, even as they make statements that ascribe certain characteristics to an entire group. For example, to say that women or immigrant groups cannot drive is to make a sexist and/or racist comment. Anyone can be sexist or racist, just as anyone can resist sexism and racism.

One of the last socially acceptable means of recreating historic oppression is the joke. Jokes about women and ethnic groups are popularly reproduced all of the time. If any offence is taken by the target of these “jokes,” they may be quickly reassured that they should “try to understand” that it’s “just a joke.”

Negative perceptions of women remain an endemic problem in many societies around the world – in elementary school, 1 in 10 girls are unhappy they are a girl, with this number doubling to 1 in 5 by the time they are in high school. This contrasts with 1% and 3% of boys in elementary and high school who are unhappy about being a boy. Where are all these negative perceptions coming from?

Jokes are merely one way that negative perceptions are reproduced, and yet they can also be the most difficult to challenge. Interestingly, I’ve often found the worst offenders are also those most readily excused. He’s a “joker” – that’s just the way he is, which fits neatly with the old adage, “boys will be boys.” Girls have usually been held down by much stricter rules. As such, I’ve been asked to accept words that strike fear and vulnerability, and even outright threats against my health and safety, because they come from a “joker.” Being a “joker” somehow provides social license to say anything, regardless of how much hurt or personal suffering these words cause. But jokes are not a valid defence against harassment.

Anti-harrassment guides and equity studies stress that it is not the intent but the effect of comments or actions that need to be addressed. As such, jokes are explicitly listed as a cause of racial, sexual and gender-based discrimination or harassment – see, for example, the Canadian Human Rights Commission and the Ontario Human Rights Commission.

I have often witnessed sexism and racism reproduced under the guise of “joking” – indeed, I’ve been exposed to these jokes since I was a little girl, so that just accepting them has become normative. The easy path to group acceptance is to laugh and shrug it off, but this also reinforces the pain, degradation or humiliation of others. It can be very challenging to stop laughing and counter these “jokes.” Often sexist and racist paternalism is the result, as people patiently try to explain how to “understand” the joke, or tell me to stop “overreacting.” Toughen up – take it like a man?

These personal experiences have larger political consequences because they are reproduced in many different ways all around the world. The biggest challenge to individual sexism is that each and every individual must commit to ending it. I don’t anticipate that this will happen in my lifetime, but I certainly won’t stop trying.

But the greatest promise of individual forms of sexism and racism is that it is something we all have the power to change. For example, I have grown up in a society where I have enjoyed a privileged status because I am white. My white privilege blinds me to lived experiences of racism. Although I would never intentionally make a racist comment, if someone told me that something I said made them feel uncomfortable or demeaned, I would not force my intent on them. I would listen to the effect of my words and actions, and I would try to learn from that so I am better prepared to avoid repeating unwanted words and actions in the future. This is how our individual actions can contribute to a more equitable society.

Granted, this is not a project everyone will embrace. Yet anyone who does identify as an ally in the fight against forms of oppression like sexism and racism may want to consider how they feed into these power systems even if they’re “just joking.” It doesn’t make much sense to try to break and reinforce a system at the same time.

What makes a “good” joke will always be relative. However, I respectfully submit that a good joke should be funny for everyone. Good jokes shouldn’t demean or push groups outside our own down, they should raise us all up. If we are lifting ourselves at the expense of forcing others down, perhaps it’s long past time to find some new material.

Christine McLaughlin is a PhD Candidate in History at York University and a Co-Editor of ActiveHistory.ca.

4 thoughts on “What’s So Funny About Sexism, Racism and Harassment?”