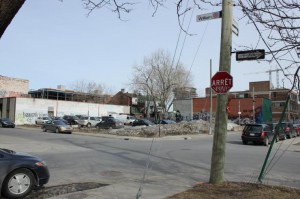 The corner of William and Murray, where Mary Gallagher supposedly appears

The evening of June 26th, 2012. A group is standing solemnly at the corner of William and Murray Streets, in what remains of Griffintown, one of Montreal’s most notorious working class neighborhoods. Some are chatting and laughing, others, more serious, are eagerly pointing their cameras, seemingly waiting for something to happen on this warm summer night.

This is the famous Griffintown Ghostwatch, a gathering of ghost enthusiasts and former Griffintown residents who meet every seven years to witness the apparition of the headless ghost of Mary Gallagher.

Mary Gallagher, a prostitute, was the victim of a gruesome murder. On the evening of June 27th, 1879, Susan Kennedy decapitated Gallagher with an ax. She had been driven to rage by jealousy after Gallagher received more attention from a client than her. As legend has it, the ghost of Mary Gallagher now comes back every seven years to look for her head, haunting the streets of Griffintown.

The story doesn’t tell if the group truly encountered the headless ghost. But a question is worth asking: If Mary Gallagher were to appear that evening in 2012, 133 years after she was murdered, would she have recognized the Griffintown where she once lived?

Chances are she would not. Few neighborhoods in Montreal have been through as drastic a transformation as Griffintown. What follows is an overview of a lost neighborhood’s story.

Back in 1791, when Montreal was still young, Thomas McCord, an Irish businessman and politician, showed interest in an area of town then called the Nazareth sub-fief, located in southeast Montreal. Envisioning the area’s strategic location near the port, McCord acquired a 99- year lease on the lot and started exploiting it, mostly for farming. McCord did not suspect what was about to happen: Mary Griffin, in Irish immigrant, illegally obtained the lease from one of McCord’s associates in 1799. Griffin had the land divided into lots and streets; she built low-cost housing, which led to dozens of working class Irish immigrants settling in the neighborhood. McCord regained his titles and ownership in 1814 after a long legal battle. But by then, Griffin’s name had stuck to the area. Griffintown was born.

Life was hard in Griffintown. Its habitants worked either on the construction of the Lachine Canal, the Victoria bridge, the railway or in local factories. A typical day of work was 15 hours long. Housing was precarious too. Built close to one another and with wooden frames, they were frequently exposed to fires. In 1852, a huge blaze burnt half of Griffintown to the ground, putting hundreds of people on the street. Systematically, every spring, the ice break-up on the St-Lawrence flooded the area and caused loss and damage to an already poverty-stricken community.

A Hard Life, but a Vibrant Spirit

Harsh living conditions in Griffintown, then, undoubtedly – but, according to many testimonials of former Griffintown residents, an incomparable, heart-warming sense of community and belonging as well. For an outsider, Griffintown might have seemed miserable, but the wooden houses and small streets of the area were populated by a spirited and tightly-knit community of proud people. “Despite their hardships,” says Sharon Doyle Driedger, a former Griffintown resident in a Maclean’s article published in 2003, “Griffintowners felt rich in a way no outsider could understand.” 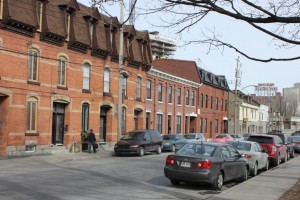 Theirs was a strong spirit of camaraderie between neighbors and fellow Griffintowners. “The sidewalks were busy,” remembers Driedger, “and familiar voices and laughter, along with the odd shout and clatter, would filter through the shutters, joining the whiff of yeast from the brewery, the scent of chocolate from Lowney’s factory. The red-brick houses, hard to the sidewalk, made a dramatic backdrop for some larger-than-life characters.”  Gangs stood at every corner, but instead of threatening the population, they gave residents a sense of security. According to Driedger: “At one point there was a police station on Young Street, but it closed after a year or so because there was so little crime.”

The neighbourhood grew around the beginning of the twentieth century, as French Canadians, Italians and Ukranians joined the Irish. Many of the sixty thousand people who lived in Griffintown at the time never set foot in other parts of Montreal and lived their whole lives in the streets of “The Griff”. The vibrant community gathered on Sundays at Church St-Ann, the epicenter of the neighborhood. The mass marked an essential weekly event that each and every Griffintowner felt they must attend, as otherwise they would be told off by the priest and their neighbors. 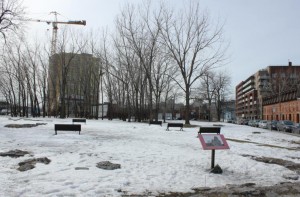 Church St-Ann doesn’t exist anymore. It was destroyed in 1970, along with many other Griffintown landmarks.

Where Did Everybody Go?

Significant economic changes occurred in the 1950s. The Lachine Canal, a key part of Griffintown’s economic activity, lost it transportation and commercial purpose with the construction of the St. Lawrence Seaway.

In 1963, the City of Montreal re-zoned Griffintown as industrial and announced a project to build the Bonaventure Expressway right through the east end of the neighborhood. Many homes were either demolished by the city to build industries and the Expressway, or abandoned. The area soon became a blend of industries, parking lots and abandoned, unkept houses. Dozens of Griffintowners left the neighborhood to find work and lodging elsewhere. By 1970, the population of Griffintown decreased by over 70 percent. Of the sixty thousand people living there between the mid-nineteenth and mid-twentieth centuries, a mere thousand remained. 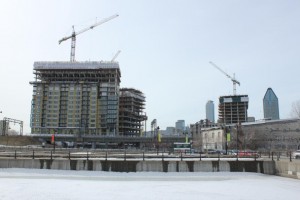 Three of the District Griffin’s towers under construction

While walking in the streets of Griffintown today, you can no longer hear the lively voices, laughter and music that once animated the neighborhood. But you can hear a whole lot of jackhammering, digging and bulldozing.

The neighborhood is going through an intense gentrification process. Luxury condo projects are overtaking the area, promising to revive it while keeping its spirit alive. The contractors of District Griffin, a huge, ambitious condo project of over two thousand apartments – literally a small city in itself – assure that “ the cultural, artistic, and historical heritage will be honored with the restoration of the urban center and public space.” But the contrast between their fancy, luxurious buildings and what Griffintown used to look like is striking. The “clean and attractive environment”  that District Griffin’s contractors commit to create is definitely not in line with what the lively, messy and dirty Griffintown used to be!

The Ghosts of Griffintown, a documentary by Richard Burman, 2003.

Griffintown, a short film by Michel Régnier, 1972 (In French only, no subtitles).

The story and legend of Mary Gallagher, as told in a short video

A collection of historic pictures of Griffintown

Griffintown Yesterday and Today, a beautiful website, provides plenty of information and historical documents and photographs about Griffintown.

Mireille Mayrand-Fiset is a travel, music and theater enthusiast. She wrote for the stage and television, and is now working as a freelance blogger for Standard Life, a leading long-term savings and investment company, providing Canadians with advice on Quebec Pension Plan.