Stuart Henderson’s Making the Scene: Yorkville and Hip Toronto in the 1960s is an adventure back in time to Yorkville at what many would consider the pinnacle of its cultural history. Fifty years ago, the Yorkville Coffee Mill opened, among the first of many to become a hub for youth exploring counterculture through music and mysticism. Henderson’s book, which stemmed from his doctoral dissertation at Queen’s University, is rich with oral histories and underground press coverage of the day.

Personal experience drew me to Henderson’s work. I grew up in London (Ontario) in the 1990s. My father worked in Toronto for a time and stayed in an apartment on Bay Street near Bloor. Visiting on weekends, my mother and I would wander the “Mink Mile”. By then, Yorkville was a hub of elite consumerism, with couture boutiques and flagship stories. It was cultured, rather than counterculture. 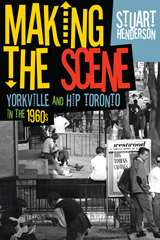 Making the Scene tells the stories of the Toronto neighbourhood of Yorkville and the hip culture that pervaded the district in the 1960s. Henderson argues that, for roughly a decade, Yorkville served as the site in Canada for youth seeking an alternative to the dominant Canadian culture.  He asserts that being part of a counterculture – defined as a subculture with values and practices that deviate from mainstream culture – involves the performance of identity. “A hippie,” he notes in the introduction, “does not, never can, exist wholly outside his or her cultural process” (5). In short, counterculture is a negotiation of identity, with cultural hegemony in play.

The book is organized chronologically in sections. Within each section is two chapters, one providing a political and cultural history of the period and the other assessing how the cultural identities in Yorkville were performed at the time. The book’s chronological organization makes Henderson’s argument easy to follow. However, there exists a strong historiography on counterculture-as-performance. Henderson does not especially take advantage of this material, and unfortunately relies on his readers to be familiar with the literature. For example, the performativity of “making the scene” requires the crossing of a threshold. Henderson even states that “as a geographic location, Yorkville was … metaphorically cut off,” and that Toronto was a divided cityscape, with Yorkville a zone of local “foreignness” (17)– both a cultural attraction and a destination. As a historian caught up in the meaning of place, this excited me until I realized that Henderson was not going to explore from where these people were being attracted, and how Yorkville was situated in the context of a rapidly expanding Toronto. In particular, it struck me that there were opportunities for the use of historical maps to tell these types of stories and to better illustrate the growth of the Yorkville coffee houses, followed by their retreat.

While Henderson situates Yorkville very well within its chronological context, the book seemed geographically isolated. The relationship between countercultures, identity, and place has been widely explored, so why not make better use of New York’s Greenwich Village or San Fransisco’s Haight-Ashbury to show what made Yorkville unique? Here, again, I think that the general reader may be disappointed that Henderson expects a high level of familiarity with the themes. Early in the work, I found myself asking questions about other countercultures in other cities and about the history of the 1960s counterculture phenomenon more broadly.

Similarly, the act of performing an identity that Henderson claims is part of “making the scene” requires the crossing of a boundary. Henderson states that “as a geographic location, Yorkville was metaphorically cut off” (268). I interpreted this to mean either that it was fully autonomous or that it had to be filled with people coming from elsewhere—by those who needed to cross the threshold from the dominant culture to the counterculture. Bloor Street between Yonge Street and Avenue Road remains, to this day, a cultural border best crossed under the right economic or social circumstances.  I had hoped that Henderson would explore this idea further. Where were the people coming from? How was Yorkville situated in and affected by its geographic context of a rapidly changing and growing Toronto? Most of the images in the book are taken from underground press. There is one map, at the beginning, which shows the streets of Yorkville and their coffeehouses. Indeed, Henderson refers to Yorkville as “tied to a map of meaning which treated it as a circumscribed island of difference within the wider cityscape” (268), but we aren’t shown what exists around the island.

Henderson relies on dialogue from the film The Big Lebowski (1998) to describe the legacy of hip Yorkville:

‘Your revolution is over,’ counsels the conservative figure, as the bemused [Jeff] Bridges turns away. ‘My condolences. The bums lost. My advice is do what your parents did: get a job, sir. The bums will always lose. Do you hear me?’ But he doesn’t. Do we? (273)

The end of a rebellion is nothing new. The 19th century French statesman Francois Guizot has been attributed with the following: “Not to be a republican at 20 is proof of want of heart; to be one at 30 is proof of want of head.” What makes Yorkville and the 1960s counterculture unique, according to Henderson’s conclusion, is that it influenced the mainstream culture that we see today. That may be the case. He also suggests that the struggle for physical space was ultimately insignificant. This statement ignores the post-1970 gentrification of Yorkville that occurred, in part, because of the displacement of youth from this space.

It felt at times like Henderson was writing for those who were there, or who wished they could have been there. There were moments throughout when I felt like I had to have been there to understand why the event or place being described was important. The writing, much of which is done in first-person narration, is at times valourising in its tone. The book’s strength lies in its archival research and oral histories, and from reading it came some interesting debates about the nature of culture and place in the city of Toronto. I would recommend it for readers interested in the history of the Yorkville neighbourhood, Canadian culture in the 1960s, or youth culture in Canada. I will no doubt return to it for projects that reference these subjects. It would be a good supplemental work for those interested in counterculture, the history of Toronto, oral history, and underground media.

One thought on ““Your revolution is over”: A Review of Stuart Henderson’s Making the Scene”