There’s a certain image that the term “voyageur” conjures up in the Canadian consciousness: bearded, burly, and boastful rascals who prized their independence above all else, accomplished feats of superhuman strength and endurance, and braved the uncharted wilds with a song in their heart. This portrait of the voyageur has a long pedigree — it comes to us directly from post journals and other contemporary writings, which are often taken as the final word on the subject. It was embellished over the years by soulful idylls and popular histories such as Peter C. Newman’s Company of Adventurers.

In Making the Voyageur World: Travelers and Traders in the North American Fur Trade, Carolyn Podruchny rightly calls these mythical stereotypes the “comic-book superheroes” of Canadian history (2). However, as she notes in her introduction, there is a dearth of scholarship on voyageurs. Podruchny proposes that because voyageurs lived in a state of liminality, or transition, and because this informed their entire world order, the best approach to a cultural history of voyageur identity is a metaphorical “voyage” through the physical landscape and their social geography.

Podruchny is an associate professor of history at York University, specializing in fur trade encounters, systems of communication, and identity formation. Making the Voyageur World, her first book, was originally a doctoral dissertation for the University of Toronto; while it still retains an academic tone, the book is both accessible and engaging to read. Podruchny is the first historian to develop a complete, insightful, and accurate profile of one of Canadian history’s most recognizable icons. 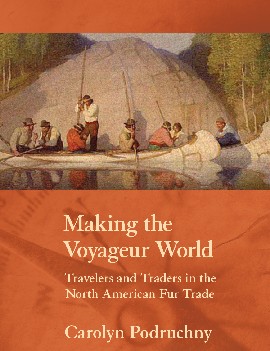 Podruchny prefaces the book by defining her terms clearly and precisely, rendering her work thoroughly navigable, even for a novice enthusiast. She introduces us to the voyageurs’ employers, the bourgeois, and to the territory they navigated, known as the pays d’en haut, or “upper country” (ix-xiii). She delineates the distinct classes of French-Canadian voyageurs: mangeurs du lard, hommes du nord, and Athabasca men. These titles, which are explored in detail later in the book, were conferred upon voyageurs who completed (or failed to complete) trips that took them past certain landmarks. Mangeurs du lard, “pork eaters,” were the fur trade equivalent of the summer soldier—they made shorter, safer trips during the warmer seasons, returning home for the winter. Men who made trips passing a point about fifty miles west of Lake Superior were then styled hommes du nord (northmen). These were usually men who had signed multi-year contracts and were considered professional voyageurs. Those who passed a second landmark at Portage La Loche graduated to the rank of Athabasca men — voyageurs for life.

Podruchny situates contemporary second-hand accounts of the voyageurs’ exploits in context, reminding us that their writers were not entirely objective. In her introduction, she outlines several strategies for “read[ing] beyond the words” of these accounts: understanding the broader context in which the accounts were written; reading widely to discern patterns; reading “against the grain” or contrary to the writer’s intentions; and unpacking the meaning behind voyageur rituals, many of which are documented by outsider witnesses (7-8).

Podruchny documents the lives and times of voyageurs using whatever sources are available. Only one piece of correspondence known to have been written by a voyageur has survived, but they did leave their mark: in stories, in songs, in customs, and in place names. Throughout the book, Podruchny guides the reader through a wealth of source material, drawn from archives across the country, and makes use of photographs, illustrations, maps, and tables. The last 100 pages of the book are devoted to comprehensive endnotes, and a bibliography which is divided into archival sources and published scholarship. The former is helpfully organized by location of the source, and includes institution-specific reference numbers; as for the latter, Podruchny has done a thorough survey of existing work in the field. Readers familiar with fur trade scholarship will recognize such names as Sylvia Van Kirk, Laura Peers, and Jennifer S.H. Brown, among others.

Making the Voyageur World does exactly that; it constructs the voyageur world — a place of pageantry, where indigenous and French-Canadian cultures mingled, and where high value was placed on the capital of masculinity — and then situates the individual players within it. Podruchny delves into the meaning behind voyageur traditions such as ceremonial baptism, exchanging of gifts, raising of maypoles, and marriages à la façon du pays; she compares these rituals to Aboriginal and French religious rites, and also to the customs of sailors and other perennial travellers. Each chapter features a different aspect of the voyageur world: departure from home and family; religion and ritual; nature and life in the canoe; work and labour relations; social celebrations; daily life at fur trade posts; love, marriage, and sex; and homecoming. The result is a more complete picture of the voyageur, an inventory of his life that is both comprehensive and compelling.

Eve Dutton is a nationally-certified heritage interpreter, and currently works as a web designer for Parks Canada. She holds an M.A. in English and her first book, an illustrated history of the Winnipeg Public Library, will be published in 2015.