In cities across Canada, citizens are emerging from their winter hibernation to a spring and summer season packed with street festivals, concerts, and other special events. In Toronto alone there are hundreds each year, from Salsa on St. Clair to Pride to the literary Word on the Street, and on summer weekends it’s hard to walk more than a few blocks downtown without stumbling across a city block crowded with vendors, beer gardens, and band shells. But despite our eagerness to get out and celebrate warm weather, cities like Toronto have always had a love/hate relationship with street closures. This is evident in city hall’s lukewarm response to a recent proposal—Open Streets—to close Bloor Street for a few Sundays this summer. 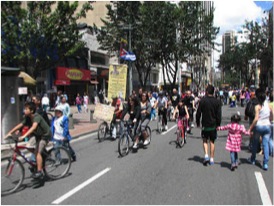 In this post I take a look at that plan in light of the project that really started the whole discussion about closing downtown streets in Toronto: the Yonge Street pedestrian mall of the early 1970s. Can the story of the mall help us understand today’s debates over street closures? I’d argue that, among other lessons, it should warn us to think big when we consider the creation of pedestrian space: half-measures tend to create their own problems, and play into the hands of those opposed to repurposing streets.

First, a brief look at what’s being proposed for 2014. Open Streets is a hugely successful concept that originated in Latin America in the 1970s and has since been adapted by cities around the world. The idea is simple: take a major thoroughfare, pick a day (usually weekend mornings) and replace the cars with joggers and cyclists. Unlike most North American street festivals, the focus is on getting out and being active, rather than shopping, eating, and entertainment. I had a chance to see the idea at work in Bogotá, Colombia—one of the earliest adopters—last December. Until 2pm on Sundays and holidays, 120 kilometres of the city’s major avenues, usually a nightmare for pedestrians thanks to the volume of traffic and pollution, are completely given over to people. Millions of Bogotans take advantage of the quiet to bike, jog, stroll, or take part in free exercise classes.

Supporters of OpenStreetsTO are proposing a similar event for Toronto: they want to see 11 kilometres of the Bloor-Danforth corridor, as well as parts of Yonge and Church Streets, closed to traffic on four Sunday mornings this summer. It is an ambitious proposal. “Activity hubs” would allow people to get involved in everything from storytelling to yoga, and north-south traffic would still be allowed to cross at major intersections. Crucially, not just a few blocks, but two significant east-west and north-south corridors, would be open to pedestrians and bikes. The goal is to promote physical activity and social connectivity by using public space in a new way. Sounds like a pretty safe bet for Toronto council: in planner Ken Greenberg’s words, Open Streets is “the simplest thing you could possibly do,” and similar events have been both hugely popular and mostly problem-free in Hamilton and New York. But on April 16th city hall’s economic development committee was decidedly unenthusiastic about the proposal.

At that meeting, opposition to the idea came from three important constituencies: the police, the TTC, and elected officials speaking on behalf of Toronto drivers. The TTC explained that it would be both inconvenient and expensive to open the Bloor subway early on the Sundays in question (buses operate on the street until the first Bloor train runs around 9am). The police response went much further, calling the proposal “logistically, operationally, and functionally impossible” to implement, and arguing that the extra police required to assure public safety would cost at least $210,000 per day. For their part, politicians like Councillor Denzil Minnan-Wong and Mayor Rob Ford, both well-known for taking the side of drivers in the perceived “war on cars,” warned of traffic “chaos” and gridlock if the city closed Bloor, and expressed skepticism about repurposing streets for exercise. The overall message was this: Toronto already has too many street closures, and they are making it impossible for the city to function. The committee ended discussion by voting for city staff to work on a seriously scaled-down version: one Sunday, and a smaller closure.

Reading those arguments—which, however exaggerated, are based on real concerns—I was struck by how closely they paralleled opposition to the Yonge Street pedestrian mall, which ran for four summers from 1971 to 1974. For the past year I’ve been researching the mall project as part of my larger thesis project on Yonge Street, and I’ve found reconstructing the debates it triggered fascinating. Of course, the Yonge mall was a different beast from Open Streets: it involved closing chunks of downtown Yonge Street for weeks at a time, and luring strollers and tourists to the area with all kinds of entertainment and attractions. But from the start it faced similar challenges. Crucially, supporters of the mall failed, in part, because they were forced by opponents to scale down their ambitions.

The Yonge mall of the 1970s was the product of number of different interests and actors. In the face of growing competition from suburban shopping malls, owners of small downtown businesses were looking for ways to attract customers. And in a period of awakening environmental consciousness and criticism of modernist planning, many North Americans were interested in finding ways to reduce pollution and create space for people in cities planned around the car. In Toronto, the idea of a pedestrian mall—discussed throughout Canada and the United States from the 1960s on—benefited from 1972 onwards from a so-called “reform” city council that was intensely interested in local democracy and human-scaled planning. All parties concerned invested a great deal of hope in the mall: it was Toronto’s most important public space project of the 1970s, and the first time the city had tried to plan for pedestrians in a big way. Many supporters saw it as the future centrepiece of a larger system of pedestrian streets in the downtown core. 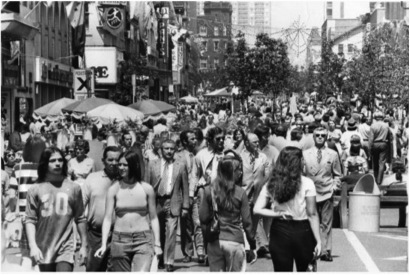 The idea was a huge success when first put into action. The Toronto Star called it a “miracle,” and asked when council would have the courage to make it permanent. Strollers on Yonge raved about the entertainment—which included music and fashion shows—and loved the city’s first-ever experiment in on-street liquor sales. 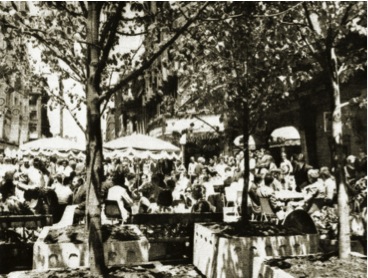 But not everyone was so enthusiastic. It became clear that closure of a major street was perceived—in some quarters, at least—mainly as an obstacle to the smooth functioning of the city. Others saw it as an invitation for social problems and the breakdown of public order. As with the current debate over Open Streets, the TTC was ambivalent. Logically, given its mandate to keep Toronto moving, it saw the mall as a hindrance to service, especially on the three bus routes that used that stretch of Yonge and on the Bay Street bus. In the end, however, it agreed to cooperate with the project.

Stauncher opposition came from transportation officials, who claimed to speak, like Rob Ford and Denzil Minnan-Wong today, in common-sense terms on behalf of drivers. For Sam Cass, Metro Toronto’s long-serving Commissioner of Roads and Traffic, even a temporary closing of Yonge was a setback of progress towards the long-range goal of helping traffic circulate by making downtown streets one-way corridors, much as the city did with Richmond and Adelaide Streets. While Cass pleaded not to be seen as “the villain of the mall,” he and other traffic officials consistently portrayed the closure as an impossible obstacle for drivers, warning Torontonians of “chaotic traffic jams.” They reminded the public that the mall was just an experiment, and asked that it not be expanded beyond a few downtown blocks.

The Metro Police were also intractable. Local law enforcement agencies tend to have more responsibilities than resources. Any additional duty—especially an event calling for a large police presence—is seen as an unnecessary use of officers’ time. Much as in discussion of Open Streets this April, police representatives couched their opposition in terms of cost and threats to public order. In a 1973 report to council, Police Chief Harold Adamson called the mall “a haven for missing juveniles, drug users, drug sellers and drunks,” and complained that the mall that year had cost the city nearly $100 000 in overtime (approximately $600 000 in today’s dollars). He argued for limiting the size of the mall in the future, or simply stopping the experiment altogether. This inherent conservatism on the part of the police is still very much a factor today: all the more so since police budgets are shrinking, rather than growing as they did in the early 1970s.

As police reports bear out, there were real problems of disorder on the Yonge Street mall, especially on hot summer nights. Pedestrianization did make the area a bit more attractive to young people and, as Adamson described them, “undesirables.” But the issue wasn’t that the area was closed to traffic.  Instead, the problem was that nowhere else was. With just four to six blocks of Yonge closed at a time, the mall inevitably became a spectacle, instead of an integrated part of the city’s network of public spaces. People congregated there in huge, sometimes impossible crowds, the way they do at street festivals today, because it was one of the only ways to get away from traffic and claim street space for their own. After four summers of pedestrian closings on Yonge, the experiment was shelved, thanks to the continued opposition of drivers, headaches with other levels of government, and continued problems with bad behaviour on the mall. I think the results would have been very different if the city had temporarily ignored the complaints of traffic planners and police, and pushed the experiment further, closing Yonge from Bloor to Queen, or trying multiple closures across the city at the same time to take the pressure off Yonge. Even a handful of partial closures—reducing streets to two lanes or only allowing public transit—would have had more chance of success.

Until the early 1980s, the city periodically debated reviving the idea, but never did. Instead, they decided to support the continued growth of public/private pedestrian space underground (the PATH), where property owners—and not the police—were responsible for security. They also started promoting more contained, temporary street festivals. More recently there have been successful experiments with Pedestrian Sundays in Kensington Market, and replacing parking spots with “parklets” on Yonge and in the Church Street Village. And now, in spring 2014, there is the proposal for Open Streets.

As city staff work to formulate a scaled-down version of the event, I’m tempted to say: keep it big! The reason people love Open Streets in Bogotá and other cities is precisely because it connects the whole city—and not just tiny chunks of it—in a human-scaled, safe way. The smaller and less frequent Open Streets is, the more likely that it will both fail in its main goal of getting a broad cross-section of Torontonians out on the streets and succumb to being just another crowded summer spectacle–like the Yonge pedestrian mall eventually did. Of course, there’s nothing wrong with crowded street festivals. But Open Streets is a chance to move beyond that constrained model, and really open the city up to its citizens.

3 thoughts on “The Value of Thinking Big: Experimenting with Pedestrian Space in Toronto, 1970s and 2014”