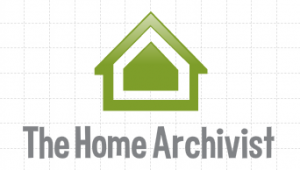 In the series’ inaugural post, I gave readers a brief overview of The Home Archivist, a project in which I—a professional historian—process and arrange a collection of nineteenth-century letters. The context in which a collection was produced, what archivists refer to as provenance, is central to these practices of processing and arranging historical documents. But what of the context in which the archivist themself encounters a collection? In this second post, I describe the circumstances of my introduction to the letters and the world I inhabit as I work with them. Whenever I open the box or think about the letters, I am connecting with the MacKendricks, the cottage at Windermere, and the canoeing encampments that brought us all together.

In late March 2014, I found myself kneeling on the carpeted floor of a bright sitting room in Milford, Connecticut, the Long Island Sound visible through the side window. In front of me was a dusty cardboard box that had spent much of the last century squirreled away in basements and attics, a repository for family letters. A first glance revealed deep discolouration, gouges on two sides of the box, and two labels on the top flaps. The box’s owners and my hosts, Bob and Marge MacKendrick, explained that the stains were from the fire that tore through the family home in Galt, Ontario, many years ago. There is no explanation for the gouges. They were likely sustained during one of the box’s many moves. The labels, meanwhile, indicate that The Robert Simpson Company sent Mrs. J.A. MacKendrick (Amelia) an item on September 24, 1918, and that the express charges for the shipping were pre-paid.

My relationship with this box of letters began in August 2013 at the Muskoka Boat and Heritage Centre (Gravenhurst, Ontario) when I was introduced to the MacKendricks. The museum had invited me to give a community lecture on the encampment and regatta of the American Canoe Association that took place on Lake Rosseau in August 1900. The ACA was a transnational canoeing organization founded in 1880 “to unite all amateur canoeists for the purpose of pleasure, health, or exploration.” Central to realizing this mission were yearly encampments that brought together enthusiasts from Canada and the United States to camp, compete, and socialize.

Bob and Marge came to the community lecture because Bob’s grandfather, John MacKendrick, and his two brothers, Will and Harry, had been enthusiastic and skilled canoeists. They were prominent members of the ACA from the 1880s until at least the 1910s. Two of the brothers were elected to the position of Commodore, John in 1896 and Will in 1899. As Commodore, Will was chiefly responsible for the organization of the Rosseau encampment.

During that first meeting, Bob informed me that, amongst other things, he had inherited a number of photograph albums depicting life at the annual meetings during the years that his grandfather was a member. The New York State Historical Association (NYSHA) has a rich photographic collection of the ACA meets, but only a limited number of these images were produced by amateur photographers, so I was excited by the prospect of seeing the encampments from another perspective. At the family’s invitation, I travelled to their cottage at Windermere, Ontario, built by John the year after the ACA met on Lake Rosseau, in late September to look through the albums. 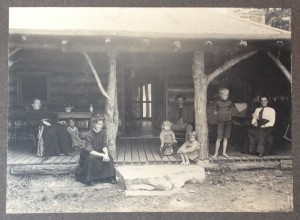 The MacKendrick cottage is a single-story log cabin dotted with mementos of the family’s ACA heritage, including photographs, trophies, and painted canoe paddles. A verandah runs the length of the building, wrapping around the east side of the cottage before bumping into the outdoor kitchen and dining room. It was here that Bob, Marge, and I, along with their friends, Elspeth and Tom Wood, settled in for lunch and time with the albums. This experience of looking through the photographs with people who knew the subjects, but also with observers who were interested if not related to this history, was a fascinating one and not just because they were able to share new information with me. Rather, it was a visible demonstration of the web of connections that binds us as historians to the people and the places that we study. My experience of my research changed as I shared space, sandwiches, and conversation with the MacKendricks and Woods. 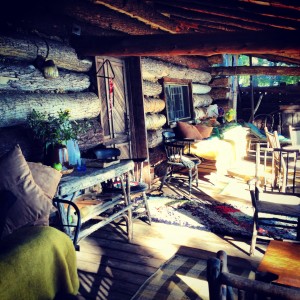 After we closed the final volume, Bob and Marge gave me some time to take pictures of the contents of the albums. As I was only able to make it through half of the photographs before the light grew too dim, we arranged that I would come to Connecticut in the spring to do the rest.

When I arrived in Milford six months later, the albums were waiting for me in the sitting room, the little scraps of newspaper I had used as placeholders still in position. In the intervening months, Bob and Marge had also uncovered a trip journal documenting John MacKendrick’s canoe cruise from Galt to the 1883 encampment on Stony Lake, north of Peterborough. As I worked through the albums and journal, Bob disappeared into the basement. He returned with the cardboard box. As Marge and Bob looked on, I gingerly lifted the flaps. There beneath a crumbling 1884 issue of Harper’s Weekly, an 1887 convocation programme from the University of Toronto, and a shoebox filled with loose letters, were layers upon layers of envelopes gathered into bunches by year, and dating, from what I could see, between 1879 and 1903. I could hardly contain my glee.

I quickly realized that it would be impossible for me to even scratch the surface of the box that afternoon. Beyond the sheer size of the collection, there were the visible markers of age and neglect, thick layers of dust and strange patches of colour that could be mold. Still relatively new to one another, the three of us talked about different options that would enable me to work with the letters and give the MacKendricks some peace of mind. In the end, Bob and Marge offered to bring the box to Muskoka over the summer, where I would collect it and transport it back to my home in Ottawa.

I felt a bit strange about the prospect of being in possession of the letters—Bob and Marge were not my family or even close friends, although it was clear from our correspondence and meetings that we were developing a relationship. It was also clear that Bob and Marge were unsure of what to do with the contents of the box. The letters had followed them through a number of moves, left largely untouched because they found the handwriting difficult to understand. While they were not willing to part with them indefinitely, they seemed to like the idea that the letters might have a new life outside of the box.

So it was that I found myself in Ottawa in mid-August staring at the box as it sat on my dining-room table, a little unsure of how to proceed. Despite having spent a good amount of time over the last seven years in archives, I have only the vaguest sense of how textual documents are processed. In anticipation of the work, I reviewed policies for small archives and then did my best to approximate them. I gathered pencils and erasers. I purchased acid-free folders for separating the letters. I am still trying to get my hands on plastic paper clips. I arranged for archival grade boxes. I charged my camera.

With all my tools positioned around me,  I opened the box…

In the next installment of The Home Archivist, I will get my hands dirty as I re-open the box for the first time. Stay tuned.

Jessica Dunkin is a SSHRC Postdoctoral Fellow in the School of Kinesiology and Health Studies at Queen’s University. Her doctoral dissertation, “Canoes and Canvas: The Social and Spatial Politics of Sport/Leisure in Late Nineteenth Century North America” (Carleton University, 2012),” explored the annual encampments and regattas of the ACA from 1880 to 1910.In addition to working with the MacKendrick letters, Jessica is researching physical activity programming for urban working-class women in Canada in the decades around the turn of the twentieth century. You can follow her on Twitter at @dunkin_jess.

2 thoughts on “The Home Archivist – The Grand Seduction”