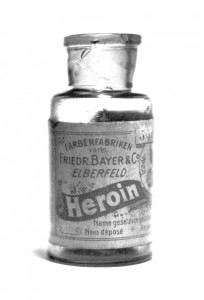 “I have learned the junk equation,” wrote William Burroughs in his semi-autobiographical 1953 book, Junkie. “Junk is not, like alcohol or weed, a means to increase enjoyment of life. Junk is not a kick. It is a way of life.”

According to Burroughs, the beatnik, spoken word performer, and author of such other novels as Naked Lunch and Queer, heroin was a way of life for habitual users and addicts. It was not simply a drug that enhanced the quality of one’s everyday experiences, nor was it a means to be a more productive individual. Rather, junk was an end in itself. Burroughs, for his part, used methadone treatment to deal with his junk addiction.

Heroin has had a long and troubled history. It started out like many other illegal drugs, including cocaine, LSD, and mescaline, and was initially touted as a wonder drug. Accepted as a legitimate product in the marketplace and tool in the doctor’s black bag, it was widely available in the U.S. and Canada during the 19th century.

The 1908 Opium Act in Canada and the 1914 Harrison Narcotics Act in the United States, which effectively outlawed its use, were passed because of a perceived increase in the number of opiate addicts, relations with Asia, and flat-out racism toward Chinese immigrant laborers.

Thereafter, it went underground and was associated with working class whites, jazz musicians, and Beats writers like Burroughs.

Yet, those familiar with the history of drugs and alcohol understand that psychoactive substances have often conformed to cyclical patterns involving intense periods of enthusiasm, therapeutic optimism, critical appraisals, and finally limited use. Sure, the duration of this cycle has varied, but this model suggests we shouldn’t be surprised about heroin’s periodic comeback tours. It was simply a matter of time.

In the 1980s, amid the Reagan administration’s War on Drugs, a dispute emerged about heroin’s use in managing certain end of life situations. For some terminally ill cancer patients in palliative care and health interest group advocates, a new evidence-based approach to junk (as well as increased access) was a way of dealing with the brutal pain associated with cancer in an appropriate and respectful manner.

In The Lancet, New England Journal of Medicine, and Annals of Internal Medicine, among other places, physicians and clinical researchers rigorously debated the science and ethics of administering heroin to palliative care patients.

William F. Buckley Jr., one of the founding fathers of modern American conservatism and surely among its leading intellectual figures, championed the use of heroin for the terminally ill. In fact, always pushing the margins, Buckley asserted that legalization of many drugs in American society was a public policy approach superior to an unwinnable War on Drugs.

Both Democratic and Republican lawmakers in the United States sponsored legislation in 1987, which would have provided irrevocably sick individuals in hospices limited access to heroin. The proposed laws did not even make it to vote.

Still, caught up in an atmosphere of “crack babies,” “Just Say No,” and which saw various comic book heroes succumb to the scourge of drugs, a seemingly radical political position such as this – taken by Daniel Inouye (D-Hawaii), Bob Dole (R-KS), and others – must have taken a degree of courage and faith in the evidence.

Judith Quattlebaum, one of the leading advocates for heroin’s legalization in the hospice and spokesperson for the Committee on the Treatment of Intractable Pain, was stunned at the level of resistance in the medical establishment and in Congress, particularly on the part of Charlie Rangel (D-N.Y.), who repeatedly made the argument that to authorize heroin use in a hospice would flood the streets with a dangerous drug.

Now, health policymakers and legal authorities in Vancouver, British Columbia have begun to administer pharmaceutical-grade heroin for addiction maintenance and crime-prevention purposes for users of junk already on the streets. It’s called heroin-assisted therapy. And it remains controversial.

The original clinical trials in Canada built on a previous research program called the North American Opiate Medication Initiative, had less than 200 participants, were double-blind, and found that heroin-assisted therapy produced mainly positive results. Also, the findings were similar to those in European studies of severe addicts that had failed with more traditional methadone approaches to heroin addiction.

Then, Health Minister Rona Ambrose (who seems to be fighting Canada’s current drug war on multiple fronts) had regulations passed in October 2013 that prevented any heroin-assisted therapy outside of the limited trials. Physicians were barred from prescribing heroin to their patients, even though the doctors thought it the best treatment option.

According to Peter McKnight in an insightful opinion piece in the Globe and Mail, this was an unsurprising development. He made the point (albeit, a slightly exaggerated one) that Canada’s “drug laws have never been about improving health or reducing crime,” and so the attempt to ban heroin therapy did not come out of left-field.

In essence, the argument made by Health Canada was the same one made by Representative Charlie Rangel. Heroin prescribed to patients, who were no longer controlled by clinical trial protocols, would somehow help to flood the streets with more junk, thereby causing more suffering.

But physicians and addicts in Vancouver fought back against Ambrose’s regulations. Represented by the Pivot Legal Society, five plaintiffs sought and won an injunction against the regulation in late November 2014, meaning 120 addicts would be given the pharmaceutical-grade heroin to minimize illicit drug use and criminal activity.

This short-term victory for heroin-assisted therapy was achieved in the face of what Donald MacPherson sarcastically calls Drug Policy Abuse, essentially a condition that prevents many elected officials from producing rational decisions. Often the symptoms include an unwillingness to talk openly about drugs, a failure to recognize the determinants involved in drug misuse, and an inability to examine the available evidence.

It was something that Judith Quattlebaum would have likely noticed in elected officials in the United States during the 1980s. William F. Buckley certainly underlined the need for policy change when he declared the War on Drugs was lost in 1996.

As lawyers with the Pivot Legal Society explained it, “ideology and not evidence” drove the Health Minister’s decision, which ultimately put “the lives of heroin users at risk.”  And according to Tom Carnwath and Ian White in their book Heroin Century, “heroin is particularly good at inducing opinions which conflict with all the evidence and ‘evidence’ that that is then moulded to fit the opinions.”

The politics of pain, heroin addiction, and proper therapies will certainly continue to challenge us in a modern democratic society.  But there is a newly evolving junk equation in 2014. Unlike Burroughs’s notion, it’s one that includes life and death and the calculations involved blend consumer protection, patient safety, crime prevention, and medical innovation. These must then be reconciled with the commonplace perceptions of scores of drugs in our daily lives. Not an easy task, especially since Carnwath and White note that heroin is a drug myths are made of.

Dr. Lucas Richert lectures in the history department at the University of Saskatchewan