“The past is a foreign country: they do things differently there”.  Can we then ever really understand who ‘they’ were and how they lived? In Testimonies and Secrets: the Story of a Nova Scotia Family 1844-1977, Robert M. Mennel invites the reader to explore the themes of family, work and community life in a very foreign place: Crousetown, Nova Scotia. 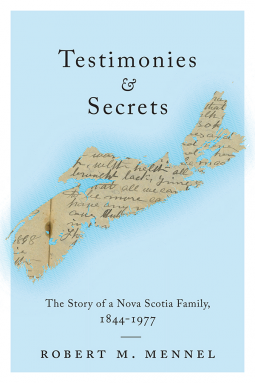 Mennel pulls together diary entries, letters, oral history and historical texts into a narrative that connects three generations of the Crouse/Eikle family. In 1998, the author discovered a dusty collection of papers that revealed the private thoughts and recollections of John Will Crouse, his daughter Elvie Eikle and her son Harold. Mennel’s interpretation of the family papers focuses on personal relationships between family members, while also considering the influence of global conflicts, social change and the industrial modernization of the period. Overall, the book leaves the impression of an amazing sense of change that occurs through three generations, even as other aspects of daily life endure.Both grandfather and grandson struggled with marriage, community relations and religion.

This book of “life writing”, as Mennel calls it, brings to light a unique set of stories that focus on the elite members of a past society, as well as ordinary people who did not leave behind written records. The main focus in Mennel’s text is John Will Crouse’s diary where he recorded his troubles and triumphs from 1871 to 1913. Mennel describes this diary as a sort of confession, which is supported by John Will’s entry from 1889: ““May the Lord here [hear] and bless and save whoever may see these few lines while I am here and when I am gone I hope that they may be read by many for good” (5). John Will’s intention to have others read his diary and learn from his experiences is also demonstrated by the openness in which he writes about his experiences.

In the first section of Testimonies and Secrets, Mennel dedicates four chapters to exploring John Will’s younger years, village, family and the autumn of his life. In the second section, Mennel uses oral history from living Crousetown residents, notable historical texts and other evidence to piece together a picture of the changes Crousetown endured during the First World War and the Interwar period. Mennel’s transitions between the personal and the global are smooth and never superfluous. This effectively provides context for the world in which the Crouse/Eikle family lived.

The third section of the book glances into the life of Elvie Eikle and then focuses on her young son Harold. Throughout his life, Harold was closely entwined with his strong female relatives who influenced him immensely. When John Will died, the Eikle family tried to maintain their social status in Crousetown, but it became a financial struggle. Elvie was deeply involved with community affairs and the reader gets a sense of her life through the social columns she wrote for Halifax and Bridgewater newspapers. Elvie’s son Harold was evidently a talented man, but faced many challenges. Mennel delicately chronicles how Harold struggled with being a gay man in a heterosexual world and his fight with alcoholism. Harold eventually moved away from Nova Scotia and when he died in Alberta in 1977, the lineage of John Will Crouse came to an end. Mennel finishes the book with a Postlude, reflecting on modern Crousetown.

Mennel successfully positions the reader to share his perspective on the Crouse/Eikle family: that of someone who is both “from away” and yet finds things familiar. Mennel visited Crousetown for many summers and now shares ownership of the Crouse family home. While neither the reader nor Mennel can hope to truly understand the lives of others from the past, Mennel does shape characters out of the family papers to which the reader can relate. The author does an excellent job of using a wide range of sources that bring credence to his conclusions. However, there are occasions where Mennel draws quite broad conclusions from simple statements in John Will’s diary. This creates weak points in the narrative where the author appears to be making firm statements when the diary entry is brief and its motivation uncertain.

Mennel brings to light a way of life that is so foreign to modern Canada that it both intrigues and baffles. The importance of the physical labour market, the courtship practices and the social interactions in 20th century Crousetown are today obsolete. But the core of Testimonies and Secrets is not. The personal relationships of the Crouse/Eikle family and their connection with their hometown is a timeless aspect of life. Mennel successfully turned the treasure trove of the Crouse/Eikle family papers into an exploration of past lives that is highly compelling.

Christine Moreland is a museum professional specializing in the interpretation of the past for the public. With an MA in Museum Studies from the University of Leicester, she has worked in public programming and exhibit planning in Ontario, Nova Scotia and the UK.

3 thoughts on “Review of Testimonies and Secrets: The Story of a Nova Scotia Family 1844-1977, by Robert M. Mennel”