In 2012, the Canadian Government led by Conservative Stephen Harper approved a policy banning full veiling from citizenship ceremonies. Zunera Ishaq, who wears a niqab and was about to become Canadian citizen, decided to postpone her ceremony in order to ask the Federal Court whether the government policy was legal. In 2015, the Federal Court found the policy illegal and ordered the government to strike it down. Harper’s government has decided to appeal the decision instead.

Mr. Harper justified his position in a parliamentary debate on March 9, 2015: “We do not allow people to cover their faces during citizenship ceremonies. Why would Canadians, contrary to our own values, embrace a practice at that time that is not transparent, that is not open and frankly is rooted in a culture that is anti-women?” (You can watch it here)

While many women have made fun of the Prime Minister for telling them what they can or cannot wear in citizenship ceremonies (#DressCodePM) and arrogating for himself the power to decide what is anti-women, both the 2012 policy and the 2015 court challenge seem to be rather well thought out political positions.

John Ralston Saul articulately argued in A Fair Country: Telling Truths about Canada against dysfunctional and cowardly Canadian elites who continue to follow a broken European legacy and refuse to embrace the social and cultural complexity that colonial history and immigration have given Canada. 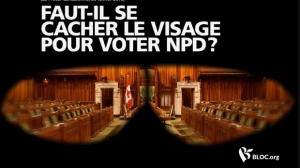 Harper is consistently moving in the opposite direction proposed by Ralston Saul. He has adopted the politics of fear triggered by the post-September 11, 2001 War on Terror, with severe consequences for various Islamic-majority countries and Canadians at home (Bill C-51), and has also begun to embrace what has been called “niqab politics,” an attempt at importing European bans against headscarves, niqabs, and burkas into Canada.

The historical roots of stereotypes of Muslim women as oppressed, submissive, and severely discriminated against by their male counterparts and a religion that relegates them to a subordinate position have been convincingly traced to Orientalist views and colonial domination of Islamic countries.[1] These stereotypes have been powerfully reinforced by the unquestioningly anti-women policies of Saudi Arabia since 1926, the Iranian Islamic Revolution since 1979, and Taliban-controlled Afghanistan from 1996 to 2001.

Iran and Saudi Arabia legislate mandatory veiling for women. France, since the first headscarf affair in 1989, has increasingly moved towards mandatory unveiling in schools in 2004 and a complete ban of full veiling in the country in 2010. Other countries and cities in Europe have also joined in the ban (Belgium) or attempted to do so (The Netherlands).

Timothy Garton Ash, Oxford professor of European Studies, argued against the French position in “Believe in liberty, equality, fraternity? This time, don’t follow the French.” Among other arguments, Ash defended that governments and legislators cannot assume women wearing full veiling in Europe or Canada are being compelled to do so by their male relatives.

In fact, a study of the Canadian Council of Muslim Women titled “Women in Nicaq Speak: A Study of the Niqab in Canada” revealed that only 7% of the 81 women studied had been encouraged by their husbands to wear the garment. Moreover, Canadian scholars have recently demonstrated that gender inequality in Canada is not fuelled by religion, but rather correlates with culture of origin and the length of time immigrants have been in the country.

According to the pioneer 1997 report “Islamophobia: A Challenge to Us All,” an attempt at defining Islamophobia by the British Runnymede Trust, Harper’s views are Islamophobic because they represent Islam as a monolithic and unchangeable culture defined by its sexist values. It is unclear whether Harper is publicly making Islamophobic statements as a matter of principle or because of the strategic voting gains that his party may obtain in doing so.

What is clear is that in an electoral year during which Harper may risk his job, he would be very careful to adopt a strong position against the niqab if it was going to cost him public support. Unfortunately, the opposite is true. Harper knows that embracing what Stephen Castle and Mark J. Miller identified as the postwar politicization of migration offers political gains to law-and-order politicians. Today, anti-Muslim rhetoric can provide significant and needed support for Harper in Quebec. Moreover, recent polls suggest that more than two thirds of Canadians agree with Harper’s anti-niqab position.

Quebec, following its historical connection with France, has been at the forefront of importing niqab politics into Canada. In 1995, political theorists Joseph Carens and Will Kymlicka agreed that Quebec nationalism was predominantly civic and liberal. They found that some of Quebec’s illiberal measures in language and education policies were justified in order to reduce the cultural imbalance Franco-Quebecers felt and thus set the foundations for a civic and liberal national project. What neither Carens nor Kymlicka seem to have envisioned at the time was that the amount of illiberal measures some Quebec nationalists considered necessary and legitimate would end up endangering the religious rights of immigrants and minorities in Quebec.

The politicization of immigration has always been a contentious issue in Quebec, as it is among other national minorities. In the 1995 referendum, most immigrants and religious minorities voted against independence. Quebec nationalists realized they had to include immigrants and minorities in their project if they aimed to secede by democratic means. But anti-immigrant and anti-religious attitudes on the ground hindered this prospect.

The 2008 Bouchard-Taylor Commission, in charge of studying conflicts over the integration of immigrants and religious minorities in Quebec and reporting on what reasonable accommodations these should be entitled to, concluded that religious conflicts in Quebec were overstated. The tensions it had analyzed were part of the normal process of adaptation that all migrant communities experience.

Some Quebec nationalist politicians and their constituencies were hardly satisfied with the Commission’s conclusion that it was the unreasonable fears of the host society, rather than the unreasonable demands of religious minorities that had to be addressed. So upset were they that the Bouchard-Taylor report and all the complementary materials have been taken off line.

The failed parliamentary initiative, the Charter of Quebec Values, officially called the “Charter affirming the values of State secularism and religious neutrality and the equality between women and men, and providing a framework for accommodation requests” only hardened the division between most Quebecois nationalist and religious minorities in Quebec.

The failure of Pauline Marois’ Parti Québécois to win reelection in 2014 killed the proposed Charter, but the recent passing of Bill 94 that bans full veiling when giving or receiving public services by the subsequent Liberal government shows there is a strong consensus in Quebec against full veiling.

Tensions centered over the religious rights of Quebec Muslims remain high and, following a well-walked European path, have moved from full-veiling bans to include problematizing headscarves and mosque building. Rania El-Alloul was told in February 2015 by a Quebec judge that her case in court could not be heard because she was not “suitably dressed.” What was deemed unsuitable by Justice Eliana Marengo was El-Alloul’s headscarf. And the following month, Haroun Bouazzi, co-president of the Association of Muslims and Arabs for a Secular Quebec, denounced on the CBC that Quebec authorities were actively trying to shut down existing mosques and stop new mosques from opening.

On March 2015, the Bloc Quebecois add with the text “Should you have to hide your face to vote NDP?” confirms that some Quebec nationalists, despite losing the last election due in part to the controversy over the Charter of Quebec Values, have embraced niqab politics as a strategy they hope will work to unify a fearful Quebecois population behind them.

Will the rest of Canada follow Quebec’s lead? Stephen Harper is certainly listening to the sirens of niqab politics. Ralston Saul warned that “A prime minister, minister or premier must never play upon people’s fear of the other, as was done repeatedly, for example, in 2007 over the dress of Islamic women voters [see here], in the hope of gaining support from other parts of the population. This is a dangerous and irresponsible game.”[2]

It is perhaps time to remind ourselves and our politicians that “The whole Canadian experience of immigration has been one of experimenting with adaptation. It’s not about humiliating people by shutting them into preconceived models”.[3]