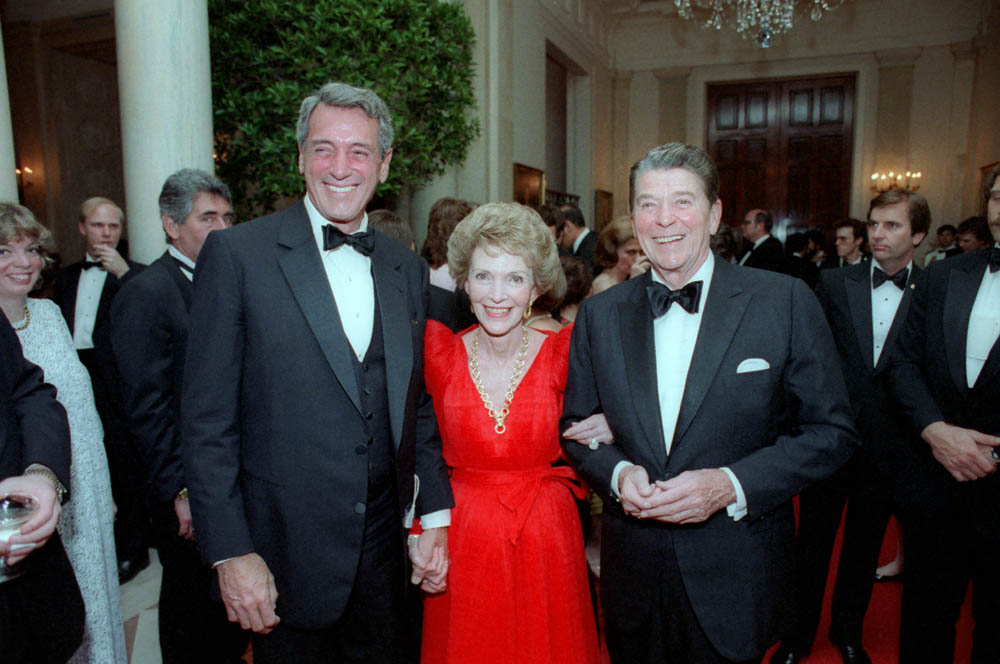 Hudson (left) with President Ronald Reagan and first lady Nancy Reagan at a White House state dinner, May 1984, less than three weeks before he was diagnosed with HIV. [Wikipedia]

In recent months, a gay rights group, the Mattachine Society, have helped provide a more expansive view of Rock Hudson’s final struggle with AIDS. In documents obtained from the Reagan Presidential Library and available on BuzzFeed, it is clear that Nancy Reagan refused to help the dying Hudson receive treatment.

This matters. When he died in October 1985, Hudson became the first high-profile celebrity linked to homosexuality and AIDS. He was a major Hollywood star in the 1950s and 1960s and his situation helped create awareness of HIV/AIDS. These recent documents thus provide a fresh perspective on the Reagan administration, sexuality, and at the same time point toward the need for new AIDS scholarship. In the years ahead, scholars will have the opportunity to connect this development in an already well-researched story with novel HIV/AIDS scholarship on African Americans and First Nations in the United States and Canada.

In July 1985, Hudson traveled to France for special experimental treatment with the drug HPA-23, which was unavailable in the U.S. Incredibly ill, he collapsed and this is when Hudson, who had hidden his homosexuality throughout his career, called upon his old Hollywood friends, the Reagans. A telegram was sent to the White House on 24 July asking for assistance in being transferred to the Percy military hospital. “Only one hospital in the world,” read the telegram, “can offer necessary medical treatment to save life of Rock Hudson or at least alleviate his illness.”

This message eventually reached Mark Weinberg, a policy advisor, who subsequently discussed the matter with Nancy Reagan. The decision was reached that this “was not something the White House should get into.”

Whatever the considerations at the time, be they fairness or bad press, the decision contributes to larger record of inaction on the part of the White House in the 1980s. As others and myself have pointed out ad nauseam, the Reagan administration demonstrated a reluctance to accept the seriousness of AIDS as a health issue. However, in Jennifer Brier’s excellent book, Infectious Ideas, she charted how AIDS divided conservatives on the topics of sexual mores, sexuality within foreign policy, and sexual education. By taking this angle, she pushed the scholarship in helpful new directions.

Apart from the debates over President Reagan’s lack of leadership and his conservative base, the reaction to Rock Hudson’s plea reinforces notions and narratives that Americans stricken with AIDS were denied proper treatments. This was certainly the case at the Food and Drug Administration, a hot-button issue that led to protests at the agency and was recently showcased in 2013’s Dallas Buyers Club.

According to one high-ranking official at the FDA in the mid-1980s, William Hubbard, it was perceived “that the Reagan administration didn’t want to talk about AIDS for a long time.”Hubbard added: “AIDS activists concluded that the agency was sitting on lifesaving AIDS drugs and refusing to let patients have them, sort of a ban by the social conservatives.”As a consequence, the activists, Hubbard continued, “viewed all of the FDA people as largely political, hating gays, trying to keep them from getting drugs….”

A Longer Chain and New Scholarship

The response to Hudson’s plea can thus be viewed within the context of treatments withheld or denied, either real or perceived. Even more than that, commentators, scholars, and activists may view the response to Hudson as part of the bafflingly long struggle to develop a response to the AIDS crisis.

This is significant. And it matters because problems with HIV/AIDS persist and gaps in the literature demand attention. For Dan Royles, writing on Notches, much more historical research remains to be done on AIDS history, particularly in black communities. In his estimation, half of the story remains to be told.

Without a deeper understanding of this history, he writes, black communities appear as either “passive, powerless victims” or as “prejudiced people who failed to respond themselves to “a disease associated with gay men and drug users.” It is crucial, Royles argues, that researchers explore African American sexuality, urban and demographic changes, and various other angles.

Why? Rock Hudson lost his battle with AIDS in 1985 and unwittingly served as a catalyst for more action on the growing HIV/AIDS crisis. Of course, his story has been very well chronicled. Yet, 1985 was also a year in which “African Americans accounted for about a quarter of AIDS diagnoses among adults and adolescents, about double their share of the total population.”

If the response to AIDS in the United States was, as Jennifer Brier contends, a “mirror on American political transformations in the post-1960s era,” then it is of the utmost significance to evaluate the African American community to help measure the Civil Rights era.

Relatedly, within Canada, First Nations, Métis, and Inuit people continue to respond to HIV and AIDS with community-based initiatives, but are still experiencing epidemic proportions 3.5 times higher than other Canadians. Just as in the case of African American communities, this demands increased attention.

The HIV and AIDS rates among Aboriginal people in the province of Saskatchewan, for example, are among the highest in the world and more data as well as historical accounts are needed on the sex trade, injected drug use, and stigmatization (sexual or otherwise) within remote communities. Additionally, the Canadian AIDS Society has posited that Two-Spirited individuals (transgender), who face the highest rates of AIDS in the Aboriginal community, must combat homophobia and racism.

As in the case of African American communities in the U.S., the past must be connected to the present AIDS policies. But the policies must be anchored in historical knowledge – in the new scholarship. When discussing the holistic AIDS strategy for Aboriginal peoples in Canada, Margaret Poitras made just this point. It was time, she said, “to take those Band-Aids off and to look at the deep-rooted issues they’re (Aboriginals) having in their lives and help to bring that healing and that wellness forward…”

The Hudson revelations in early February enhance long-standing critiques of the Reagan administration and provide more light on the dramatis personae involved. According to Peter Staley of the AIDS Coalition to Unleash Power (ACT-UP) in The Guardian, Rock Hudson was left “out to dry,” as “unwanted and ignored as the rest of us.” By itself, this revelation is significant. Looking forward, it would be wise to unite the stories of the “ignored” Hudson and the multiple, yet untold, elements of African American and Aboriginal AIDS stories.