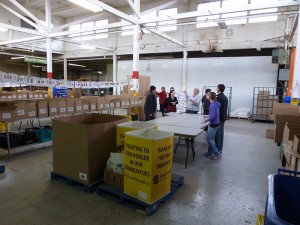 There are currently over 800 food banks and 3,000 food programs across Canada. Each month approximately 850,000 people access services provided by food banks. The distribution of food to people in need is not a new occurrence.  But the food bank model, as we know it today, was started in the United States in the 1960s by John van Hengel, a soup kitchen volunteer in Arizona.  Food banks were created during an economic recession and were designed to be a temporary solution. The first food bank in Canada opened in 1981 in Edmonton during a recession caused by an oil industry bust.  Thirty-four years later food banks are still widely used and there continues to be a need for them across Canada.

Canadian food banks are community run organizations that are typically run by volunteers to collect and distribute donated food to those ‘in need.’  Unlike the United States, Canada does not have federally funded food assistance programs such as the Supplemental Nutrition Assistance Program (SNAP) or nutrition for Women, Infants and Children (WIC) and food banks are often where Canadians turn when they are in need of food assistance. Canadian food banks receive no direct government funding and are driven by community donations.

The quality, nutritional value, and quantity of food distributed at food banks can vary greatly between communities and between visits. Additionally, the majority of food banks have policies around access and some require documentation to substantiate claims of ‘need.’ Food banks are not designed to meet all the food needs of all their clients. Rather food banks are often framed as sources of supplemental food and provide relief from immediate hunger.

The People’s Food Commission report, Land of Milk and Money, from 1980, a year before the first food bank was established, highlighted the need for emergency food sources and the overburdening of existing social services. Between 1981 when the first food bank and 1985 the number of food banks increased to 94 across the country. Many food banks were started to help existing organizations meet the demands for food within a community.  Other food banks were started in order to distribute surplus food that was being wasted.

Food banks have been a mainstay in Canadian society since the 1980s. The development of the national food bank organization Food Bank Canada (formerly the Canadian Association of Food Banks), partnerships with national food companies, and the increase in the role of food banks in the social assistance landscape all point to the institutionalization of food banks. In many cases they have become a second tier part of social assistance and fill in gaps left by social welfare programs.

Criticisms of the food bank system began less than a decade after the first food bank opened. Observers such as Graham Riches highlighted that food banks to do not address food insecurity or food poverty and cannot be expected to solve these larger social issues.  Food insecurity is broadly defined as not having access to the variety or quantity of food needed to maintain a healthy diet.  This insecurity can range from being constantly hungry, to buying cheaper canned goods instead of fresh food, to worrying over being able to afford food.  Not everyone who lives with food insecurity visit food banks and not all food bank users suffer from prolonged food insecurity. However the two are closely connected.

Criticisms and the connection of food banks to insufficient social assistance programs continues today. And many have argued that framing food as charity has allowed the Canadian government to turn a blind eye to food insecurity and ignore the human right to food.  Food banks provide temporary relief to individuals but do not help resolve deeply rooted social issues such as affordable housing, employment, and access to social supports that are connected to food insecurity.

In recent years organizations across Canada have begun to move beyond the traditional food bank model.  Many organizations have started to offer community gardening, community kitchens, and urban fruit picking programs.  In 2013, 52% of Food Bank Canada’s members offered community kitchens/gardens, 39% offered skill-building programs such as budgeting or employment services, and 37% offered social programs such as child care or emergency shelters.  The broadening of mandates beyond food charity reflects the desire to provide sustainable supports, decrease stigma around food banks, and help alleviate food insecurity in other ways.

In 2014 food bank usage remained 25% higher than prior to the recession of 2008. Food Bank Canada’s Hunger Count report links the rise in food bank patrons to the recent changes in the national unemployment rate.  Years after their establishment as a temporary measure many food banks are under increased pressure from an ever growing client base and are mainstays in Canadian society.

Krista McCracken is an Archives Supervisor at Algoma University. She is a co-editor of Activehistory.ca