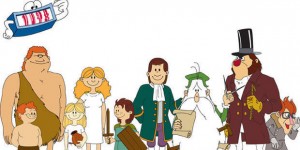 On a hot July night, while in the throes of insomnia, I found myself waxing nostalgic and decided to revisit my favourite childhood animated series. After watching a few episodes of Cobra and The Mysterious Cities of Gold (also fascinating animation series in their own right) I realized that Once Upon a Time… Man (Il était une fois… L’Homme) was available online. Over the next two weeks, as I kept working my way through the remaining episodes, I realized that not only was the series a product of its time (it was first released in 1978), but also not exclusively designed for children. Indeed, the analysis of the subjects covered and the narrative style might seem pedagogically incorrect in our day and age.

In twenty-six episodes, this French series covers world history from the prehistory to the 1970s and beyond, as the final installment ventures into predictions on the near and distant future (to 2150). The main characters are archetypal and experience almost no development, except for the fact that they live in a different time period in every episode. Pierre, an adult male, is supposed to represent the “average” man. Although he has no special talent, he is, most of the time, a positive character. Le Gros, a curly-haired giant, is Pierre’s sidekick. Although he is scrappy and not particularly bright, he is a well-meaning character. Maestro, an unusually hairy intellectual, is an avatar of the “senex” (“wise old man”) archetype.[1] He is the moral authority, as he embodies reason, intellectual curiosity, and creativity. The “good guys” also count in their ranks Pierrette (Pierre’s female counterpart) and a few children. Finally, le Teigneux (the Pest), a strong, square-jawed brute, his sidekick le Nabot (the Dwarf) embody the most treacherous, predatory, greedy sides of humankind. Another fixture in the show is a partly anthropomorphic rectangular clock indicating the year a given event is taking place. Although the Clock is a silent character, it occasionally expresses its opinions on the subject being treated (by frowning, sobbing, or rejoicing). 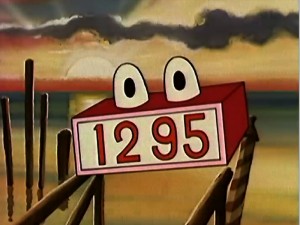 That the characters have as little substance as Bugs Bunny should not come as a surprise, as the series openly targets children. The frequent recourse to slapstick is, of course not surprising either. That said, almost everything else about the series is foreign to current ideas of what children’s TV programs should be like. Firstly, the violence is graphic and omnipresent. While recounting the history of humankind would be difficult without highlighting the atrocity of war or the disastrous effects of the Black Death, the bloody carcasses of dead zebras (Episode 1) or the brutal assassination of Julius Caesar (E. 7) would probably cause controversy today. Secondly, several examples of abuse and rape are almost explicit. In episode 6, for instance, the narrator tells the story of a “Spartan wedding” (code word for “rape”) and introduces the section by sarcastically observing that “life picked up … with all its usual good-natured pranks.” As for the description of the “wedding,” it is unambiguous: a group of Spartan soldiers led by the Pest abduct a young woman and rape her, thereby forcing her to marry one of them. Of course, the act itself is not shown, but strongly suggested. While the screenwriters obviously condemn such practices, their use of irony and the disturbing nature of the scene seem more appropriate for an adolescent or adult audience than for children.

It is almost surprising that the show was not, to my knowledge, censored or altogether banned in Canada – in fact, the CBC and the late ACCESS Alberta (now part of CTV Two) had helped produce the show. But the past, even the recent one, “is a foreign country,” and what is deemed shocking today might have been acceptable in 1978.[2] For instance, the appearance in the fourth episode of a thick-lipped, whip-wielding, African tax collector, and, in a scene on slavery, of equally exaggerated depictions of slaves (E. 21) would certainly cause an uproar were the series to be rebroadcast unaltered on a Canadian network.

Overall, Once Upon a Time is an impressive work of vulgarization. In terms of pedagogy, some scenes are extremely sophisticated. For instance, the way the writers explain the concept of anachronism is ingenious. In the tenth episode, the Viking version of Maestro imagines building a sixteenth-century galleon but is promptly chided for it by the Clock. Furthermore, the screenwriters’ successful attempts to avoid the pitfalls of infantilization must be commended. Visually, then, the series fulfills its primary vocation of making history accessible to children. By contrast, the narrative content is more arcane. For instance, a statement like, “[u]nder Louis-Philippe, it is no longer the reign of absolute monarchy, but that of absolute bourgeoisie” (E. 23) is not likely to be understood by most young children.

In addition, this show was far from neutral, as it clearly falls in with the social Christian tradition. Indeed, what may seem at first like a middle-of-the-road perspective is in fact a centre-left one, characterized by Christian, economically egalitarian, pro-European Union, socially conservative, sexist ideas. Thus, women have almost no voice, and when they do, they are represented as coquettish or hysterical. Besides, aside from devoting a few minutes to Catherine the Great and a number of other (usually upper-class) women, the series is rather phallocentric. For instance, the episode entitled “Elizabethan England,” which initially held some promise in that regard, is in fact more about Francis Drake than about the queen and sixteenth-century England.

It should also be noted that, despite the Cold War context, the show is not rabidly anti-Communist. This is not really surprising, as the 1970s saw the signing of the Common Program (by the French Socialists and Communists) and the ill-fated “Historic Compromise” (between the Italian Communists and Christian Democrats). These developments might explain why the series barely mentions Stalin’s crimes and gives a rather sympathetic account of the Russian Revolution. Nonetheless, some episodes do not hesitate to take jabs at people and events that the Communists viewed as great ancestors and major milestones, like Maximilien de Robespierre (E. 22) and the Paris Commune (E. 23).

Finally, the series’ pro-European Union stance is of particular interest. At several points, the narrator implies the existence, throughout the ages, of a European consciousness. Here, the writers’ agenda clearly consisted of glorifying the process of European unification, which had been losing steam in the wake of the 1973 oil crisis, but was regaining momentum with the imminent admission of Greece, Portugal, and Spain. However, this generally universalist series often contradicted itself. Among other things, the writers had apparently not shaken off the memory of World War Two, as they occasionally gave free rein to anti-German sentiments. In the episode on Ancient Rome (E. 7), the parallel between the fun-loving Gauls and the French on the one hand and, on the other, between the aggressive Roman occupation troops and the Germans is unmistakable. In one scene, a Roman legion led by the Pest chants the chorus to “Ein Heller und ein Batzen” (“A penny and a dime”), a nineteenth-century drinking song wrongly associated with the Third Reich. In a later episode, German unification is unequivocally presented as an ominous development (E. 23).

The series’ Euro-enthusiasm was also accompanied by a Eurocentric/Christianocentric worldview. Thus the Spanish victory over the Muslims in 1492 is described as a positive event (E. 15), and the birth of Jesus is seen as having had “an impact unequalled in the history of mankind” (E. 7). This Eurocentrism is particularly noticeable in the episode on the colonization of the Americas. The comment, which follows a section on the first Thanksgiving, that “a common language will be difficult to achieve between these people that 10,000 years of civilization separate,” and that “[t]he [settlers’] appetite for conquests will clash violently with the rudimentary rusticity of the Natives” (E. 21) is representative of that worldview. Indeed, the writers see the idea of “progress” as the main yardstick for judging the quality of a civilization.

In conclusion, this show can only be understood if placed within its historical and ideological contexts. The apparently objective narrative reflects in fact the tenets of social Christian ideology. The latter’s influence on the series failed to provoke a debate at the time due to its eclectic, non-confrontational nature. But Once Upon a Time is not a thing of the past, as reruns are currently being broadcast on French national television! In that regard, the absence of any pedagogical alternative to this outdated perspective on world history is quite worrisome. That being said, the series has the merit of offering a clear synthesis of the main events and inventions that have marked human history. Finally, Once Upon a Time is an excellent way to show children that history can be incredibly fun.

[1] Carl Jung, “The Phenomenology of the Spirit in Fairytales,” in The Archetypes and the Collective Unconscious, ed. and trans. Richard Francis Carrington Hull (Princeton: Princeton University Press, 1990), 216.